Well here we are – 150 recipes in. I didn’t realise I was at this milestone until yesterday – unfortunately it’s not some magnificent feast, in fact it’s really a recipe as such, and I can’t really give it a rating (at least not yet).

Jane Grigson has quite a few recipes that require salting and brining, so I thought I’d better start to get to grips with this completely ignored section of the book, by making roast ham from start to finish as the best way for me to get started, though I’ll discuss that in a separate post – this one is just concerned with brining generally.

I’ve been doing a bit of reading on the subject of brining and it seems a bit of a lost art – there’s not much information about the history of it or how to do your own curing by the method. Obviously it’s gone out of favour to some degree because it is a method of preservation first and foremost, and now with frozen and refrigerated meats on tap these days we don’t have to do such things. However, brining also lends good flavour – we all like good ham, gammon or salt beef – so you would think it popular (seeing as it’s easy too). The thing is that it is time-consuming, and we can all just pick some up ready brined or ready roasted meat, but one thing I read was that for many wet-cured meats, the wet-cure part of the process is missed out! These days they are cured with nitrating bacteria – nitrates help preserve things – resulting a lack of flavour. I’m certainly not insinuating that this method is ubiquitous, but I reckon most supermarkets (and many butchers) use it.

Brine contains three magic ingredients that help preserve meat: salt, sugar and saltpetre. The first two do so because they are in huge quantities in the brine, and can affect the normal osmotic pressures of cells – both animal and microbe. Salts and sugar enter the cells, and water rushes out in an attempt to equal the concentrations inside and outside of the cells. This results in the death of the microbes and the preservation of the meat. Saltpetre (or potassium nitrate) is antibacterial and also gives the meat a pleasing pink colour (it is what makes corned beef so pink, for example). Aside from these three ingredients there are several herbs and spices that improve the flavour of the meat.

FYI: In days of yore, saltpetre was produced by pouring stale urine to huge haystacks where it would drain and crystallise. Yum!!

To make the brine, start off by cleaning a tub or bucket with a close-fitting lid and a plate that will comfortably fit inside with soda crystals. I used a six litre Tupperware tub with a handle. Do not use a metal tub as it may react with the salt or saltpetre. Allow them to drip dry. Whilst you’re waiting for that, make the brine: To a large stockpot or similar add 5 pints of water, 12 ounces each of sea salt and brown sugar and an ounce of saltpetre. This is the basic mixture, but now you need some aromatics (all of which are optional): 1 level teaspoon of juniper berries, a small piece of grated nutmeg, a bay leaf, 3 sprigs of thyme, a level teaspoon of black peppercorns and 4 cloves, Grigson says, but anything you like in that goes with the meat you are brining. Bring to a rapid boil and skim off any scum should there be any. Allow to cool in the pot. Once cool, strain it into your cleaned tub. Place in the joint of meat and keep it submerged in the brine with the plate you washed earlier. Place in a cool cupboard or pantry – though don’t allow it to go below 4°C. The length of time it sits there now depends upon the type of meat and the reason you are brining it (see your recipe, or below, for guidelines). When it is done remove with some clean tongs.

The brine won’t last indefinitely – it may grow mould on it’s surface, which some people say just to skim off. The reason is; the amount of salt depletes every time you use it. For a corrective dose, boil 1 ¾ pints of water with 7 ounces each of salt and sugar and a heaped dessertspoon of juniper berries. Let it cool and add it to the skimmed brine. You could of course just make more from scratch. 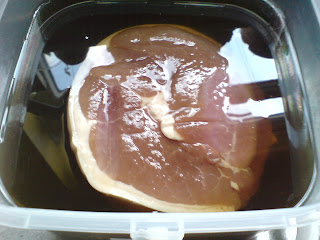 The meat needs to be cooked by boiling – check the cooking water is not too salty after about 5 minutes cooking. If it is change the water and start again. If it’s okay, then add your stock vegetables or whatever the recipe requires.

However, if you are making a roast joint for Sunday lunch, try popping the joint in brine overnight to season it.

So there you have it – hopefully all works out and it doesn’t taste completely foul. My fingers are crossed that it ends up being worth the effort.

This post is so helpful! You've inspired me. Also, thank you for saving me from the mazarines...I had plans to make them until I saw your post.

Oh yes, the mazarines were a disappointment alright. If you do some curing, let me know how it goes