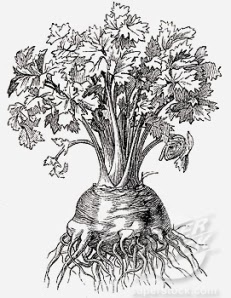 The great thing about celery is that it is two vegetables and one spice all in one.
The large familiar swollen stems are actually greatly enlarged leaf stalks and make up most of the plant visible above the soil. The celery we know and love was selectively bred in 14th century Italy from the wild plant that is “rank, coarse, and…poisonous” according to the celery expert Theophilus Roessle. It is these stalks that join onions and carrots to produce the trinity of stock vegetables – indeed it is for stock, or for salads, that celery is commonly used, but it does make a great vegetable on its own. It was very popular to serve celery sauces with poultry, or served covered in a cream sauce with pheasant, which is what we have here for this recipe.
In Good Things, Jane Grigson gives us two valuable pieces of advice: firstly, that celery is a seasonal vegetable that is at its best from November and December. We have lost this seasonality and it is a shame, I expect few of us have eaten prime celery improved by the ‘first frost’. The second piece of advice is how to eat the vegetable raw; once you have procured your first-frosted celery, you should trim it and spread down the curved length of the stem good butter. Next, sprinkle with sea salt. “Avoid embellishments”, she says “a good way to start a meal.”
It is a myth that celery is calorie negative: a stick may only contain 10 calories, but it takes only 2 or 3 calories to chew, digest and process it. It is very low in calories, of course, and can help you lose weight, though "It's more of a gateway to cream cheese or peanut butter," says the nutritionist David Grotto. Indeed. In this case, it’s a gateway to bacon, port and two kinds of cream.
I plucked and drew my own pheasant, that way I could use its giblets for the sauce. For some reason, I decided that I should leave the feet on. 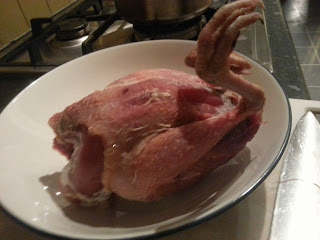 Start off by browning a pheasant in 3 ounces of butter along with a chopped onion in a frying pan. Place the pheasant breast side down with the onions in a casserole dish. Cut three strips of unsmoked bacon (aka green bacon) into thin strips and fry that in the pan briefly. Deglaze the pan with ¼ pint of port and a batch of giblet stock. See the now positively ancient post #122 Roast Pheasant for instructions on how to make some. Pour the stock, port and bacon into the casserole dish, cover tightly with a double layer of foil. Bake in the oven for 30 minutes at 180⁰C. At this point the legs of my pheasant stuck right out all flexed. At least there would be good handles when it came to the drumsticks.
Meanwhile, wash and slice a whole head of celery and when the 30 minutes is up, turn the bird the right way up and place celery around, under and within it. Season well with salt and pepper. Pop the foil lid back and give it another 30 minutes.
Remove the bird and place on a warmed serving plate, arranging the celery and bacon around it. Strain the cooking liquor into a small sauce pan. Whisk together a quarter-pint each of single cream and double cream along with a large egg yolk. Add this to the saucepan and stir with a wooden spoon over a low heat until it thickens slightly. Taste and check for seasoning and add a good squeeze of lemon juice. Lastly, scatter over some chopped parsley and serve with the sauce in a sauceboat. 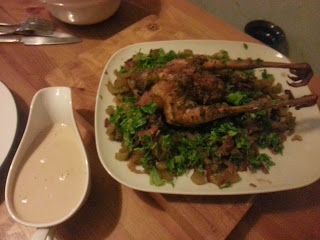 #387 Pheasant Braised with Celery. This was a great recipe that was not anywhere near as rich as I expected it to be. The port wine cream sauce was so very tasty and complemented the still slightly crisp celery perfectly. It’s worth mentioning that you should use a nice deep-green organic head of celery – and not the intensively grown stuff you get at the supermarket. Hunt out a local supplier. The pheasant itself was nicely-flavoured, but a little on the dry-side. An hour’s cooking was too much for the tiny white lady pheasant I had procured from my butcher. Luckily, plenty of creamy sauce covered a multitude of sins and it didn’t spoil this first-class recipe. I didn't cover the claws though. 8/10.
Posted by Neil Buttery at 10:25 PM 2 comments:

Herrings and oatmeal used to be staple foods in the North of England and Scotland, where the ‘silver darlings’ were plentiful and oats were pretty much the only cereal crop that could be grown in those inhospitable climes of The North. They were particularly enjoyed at breakfast. We don’t seem to eat fish at breakfasttime anymore, except for the rare kipper or a bit of smoked salmon stirred through scrambled egg, if we’re feeling posh.
Also, you don’t see recipes for this dish in older cookbooks, I assume it is because it’s so straightforward and was so commonplace that writing it down was simply not required. I cannot even find the phrase “herrings in oatmeal” before the 20th Century! More modern books include them of course, even if it just to remind us of the foods our forefathers ate.
Herring in general are quite ignored, I think, though their relative the mackerel is increasing in popularity. It’s strange that in the middle of the last century they were over-fished. It’s a shame they’ve fallen out of favour, as they are very nutritious and very cheap.

It is herring spawning season right now – they are bright-eyed, plump and have massive creamy roes in them, so if you want to try them, now is the right time
I confess, I have never eaten herrings in oatmeal, but I love herrings and I love oatmeal, so they couldn’t be bad.
This recipe is for six, but it is easy to see how it can be scaled up or down: 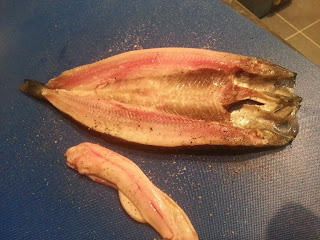 First of all, you need six fine herring. Ask the fishmonger to open the herring from the back as though they were kippers. Ask him to save the roes (they’re not required for the recipe but they should always be saved).
At home, season the fish and them press them into some medium or fine oatmeal that has been scattered over a plate; about 3 ounces should do it. Fry the herrings in butter until they are lovely and golden-brown. Do them in batches if need be, keeping the cooked ones warm in the oven on a bed of kitchen paper to keep them crisp. Serve with lemon wedges. 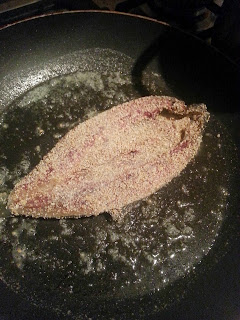 Jane tells us the best way to serve these is with simple boiled potatoes and bacon. I had the spuds, but swapped the bacon for a salad! Traditionally fatty bacon would be crisped and fried, and the herring would then be cooked in the bacon fat; next time (and there will be a next time) I’ll do the bacon thing.
#386 Herrings in Oatmeal. Well I have said it many times, but I’m going to say it again, the simple ones are the best. These were delicious, forgotten gems. The chewy oatmeal really complimented the mild herring perfectly. This sort of food has fallen so out of our collective consciousness that you just do not see it anywhere. I might be my new favourite thing. When my little restaurant opens, herrings in oatmeal will certainly be on the menu. 9/10. 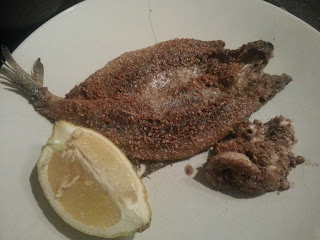 A recipe from the Preserves part of the final chapter of the book and a recipe that I have been putting off for a good while because it seemed like the most pointless preserve. The two main ingredients, you see, are tinned pineapples and dried apricots WHICH ARE ALREADY PRESERVED! What is the point of that!?


Jane tells us that her mother made this jam during the war, but lost the recipe, but then a stroke of luck; someone sent her a recipe, decades later. And here it is below. I suppose it makes a little bit of sense jazzing up the pineapple and apricots into a jam for high tea at a time of rationing.
The recipe uses not the dried apricots you typically find with the dried fruit in the supermarket, but the kind you find dried whole and rock-hard, with their stones inside. These are readily available at your local Asian grocers. 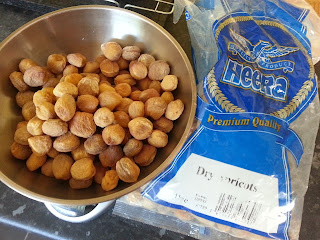 To begin, you need to soak a pound of the dried apricots in 2 ½ pints of cold water overnight. Take out the stones and crack them open to find the almond-scented kernels within. I find the best way to do this job is to put a dozen or so of the stones in a freezer bag and then swiftly crack them with a hammer. The bag stops the stones from flying everywhere, and a short swift crack with a hammer ensures that – in the main – the stones remain whole. 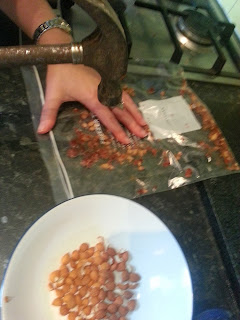 Put the soaking water along with the apricot flesh in a simmer gently for 30 minutes. Whilst they cook, drain a 12 ounce (375g) tin of pineapple, reserving the juice. Chop the pineapple quite small. Add the juice, the pineapple and kernels to the pan along with 3 pounds of sugar (granulated will do fine) and 4 ounces of blanched, slivered almonds. Bring to a rolling boil until setting point is reached using a sugar thermometer (104⁰C) or by the wrinkle test on a cold saucer. 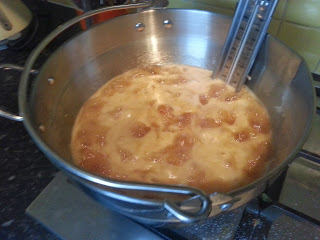 Let the jam sit for 10 minutes before potting into hot, sterilised jars.
#385 Apricot and Pineapple Jam. This is a great-looking and great-tasting jam. It looks like bejewelled honey with those almonds and kernels floating in there. It doesn’t taste as sweet as I thought it would, and is delicious on toast or in jam tarts. It seems that, although the ingredients did not need further preservation, a jam was created that was greater than the sum of their parts. All art is useless, as Oscar Wilde said. Very good: 8/10. 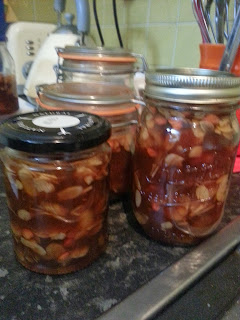