Just a quickie from the Meat Pies &Puddings part of the Meat, Poultry & Game Chapter:
This is the last of the raised pie recipes in English Food. It’s a little different in that you don’t need to make a jellied stock like the others, but a gravy made from mutton bones.

If you can’t get hold of mutton, then lamb will do just as well.


To make the pie, you will need to make a batch of hot water pastry – have a look at the post #282 Raised Pies. It also goes through the process of making the pies themselves. In this case, the pies are to be made small. To do this you can use wooden pie dollies or jam jars and raise the pastry around them. Alternatively, and much easier, is to use muffin tins and roll pastry to fit. 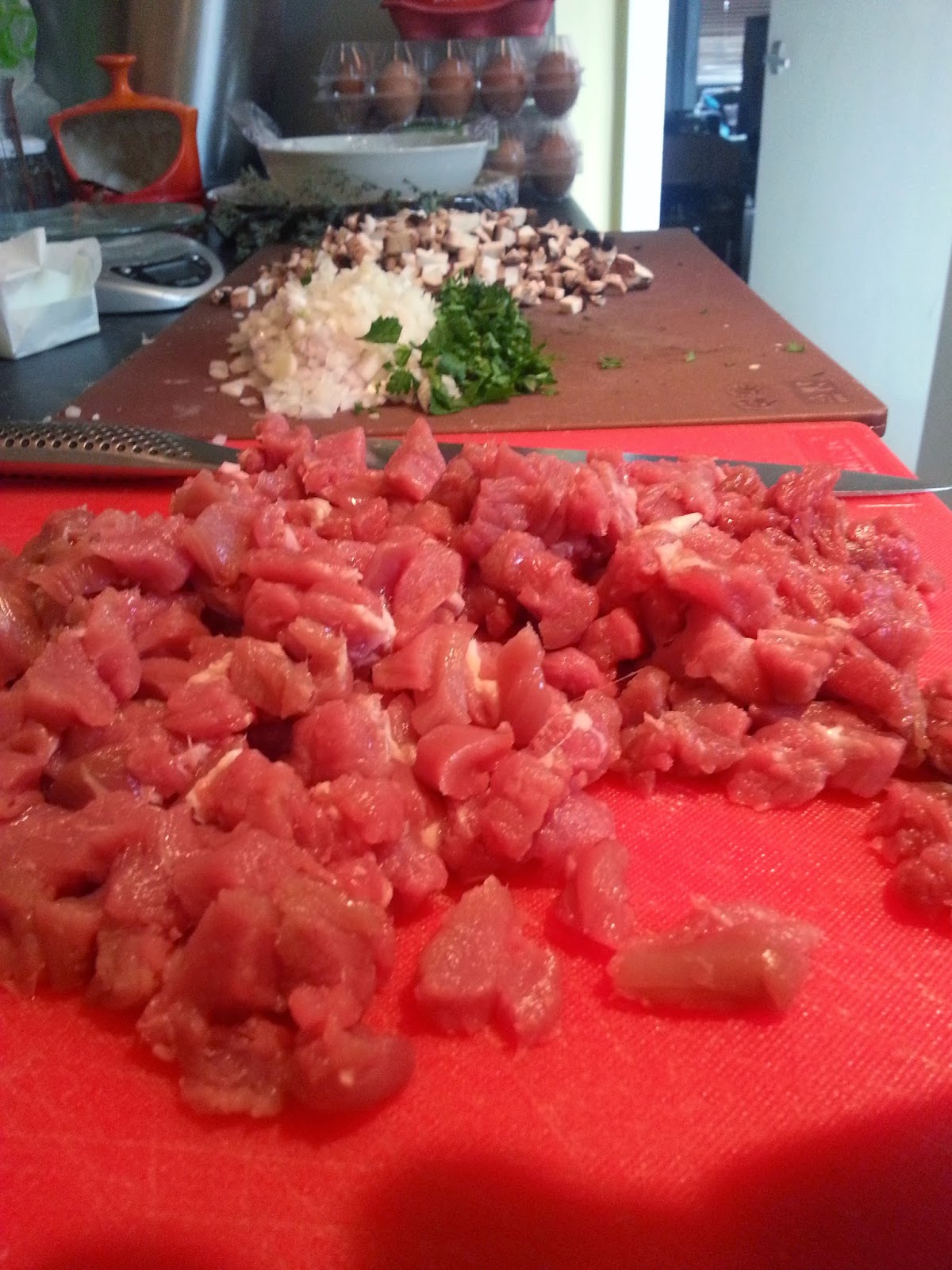 For the filling, you need a whole best end of neck of mutton, or a pound of fillet meat. Make sure the butcher give you the bones of the sheep. Chop the meat finely, including some fat. Finely chop 3 shallots or 4 ounces of onion along with 4 ounces of mushrooms and a tablespoon of parsley. Mix all of these together with the meat and a teaspoon of dried thyme and salt and pepper. Place in a pan with ¼  pint of water, bring to a simmer and let it tick over for 5 minutes. Cool. 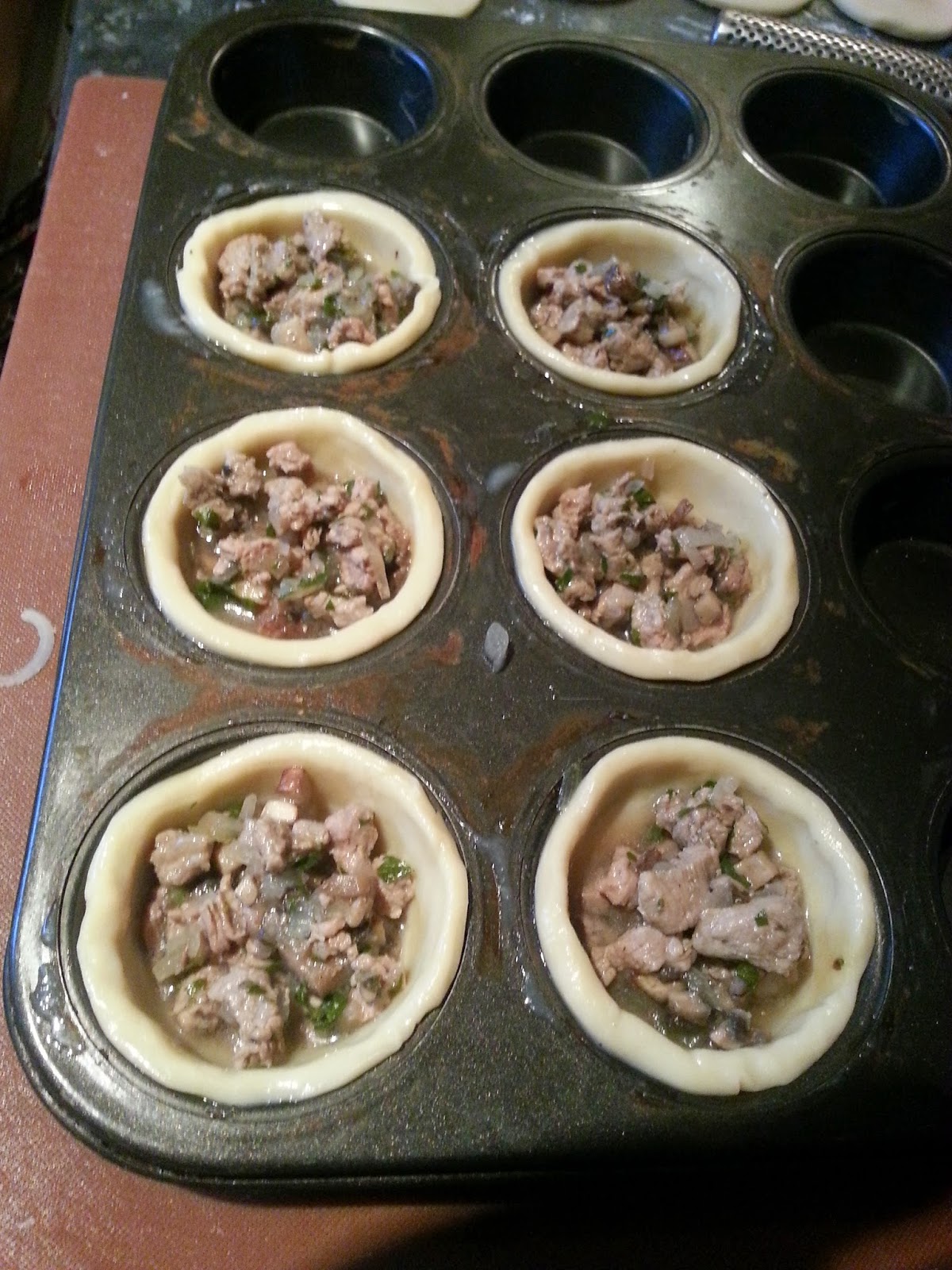 Fill your pastry cases, however you have constructed them, with the mixture and bake for 25-45 minutes at 200⁰C, depending on size. 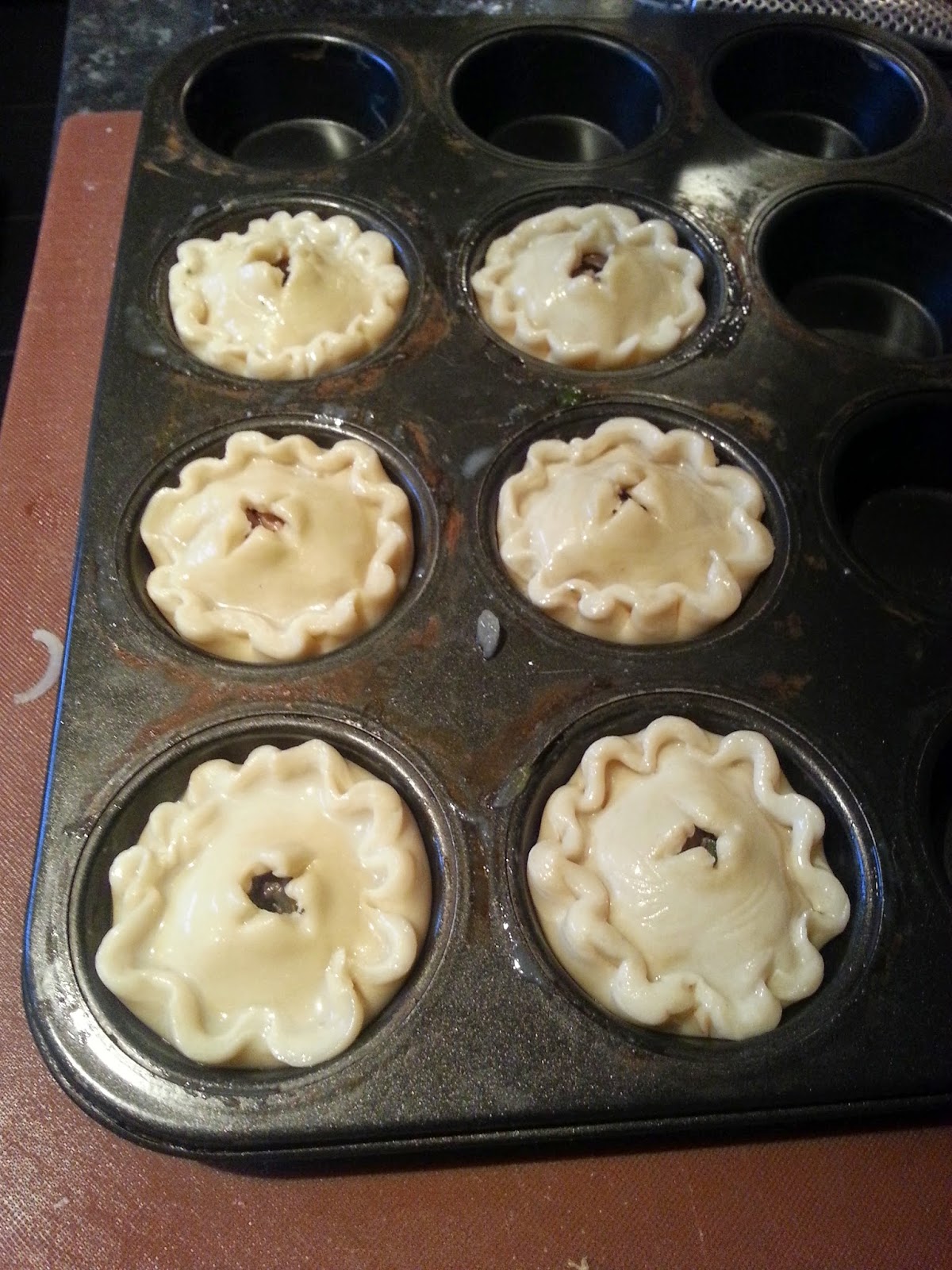 Once whipped out of the oven, pour in gravy made from the bones. There is no instruction from Jane as to how to make this, but it’s pretty easy. Make a stock from bones, trimmings and some stock veg. Reduce it and mix into a roux of butter and flour to thicken it up. 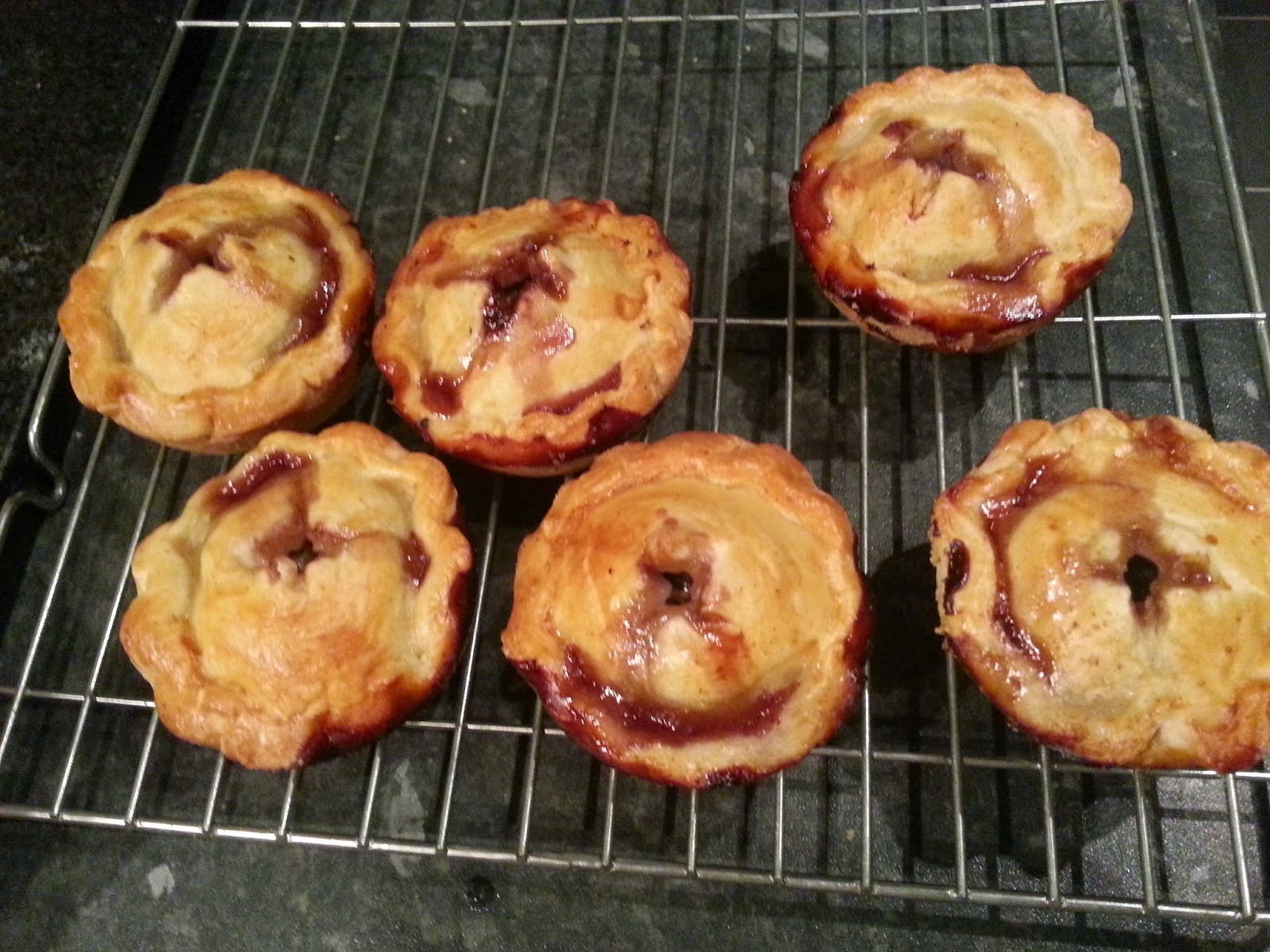 #403 Raised Mutton Pies. These were great – I must admit I was a little dubious of the watery filling, but it really was delicious, the vegetables and herbs made the water into a delicious stock, which reduced during baking. They were so good, I added them to one of pop-up restaurant menus. 8/10. 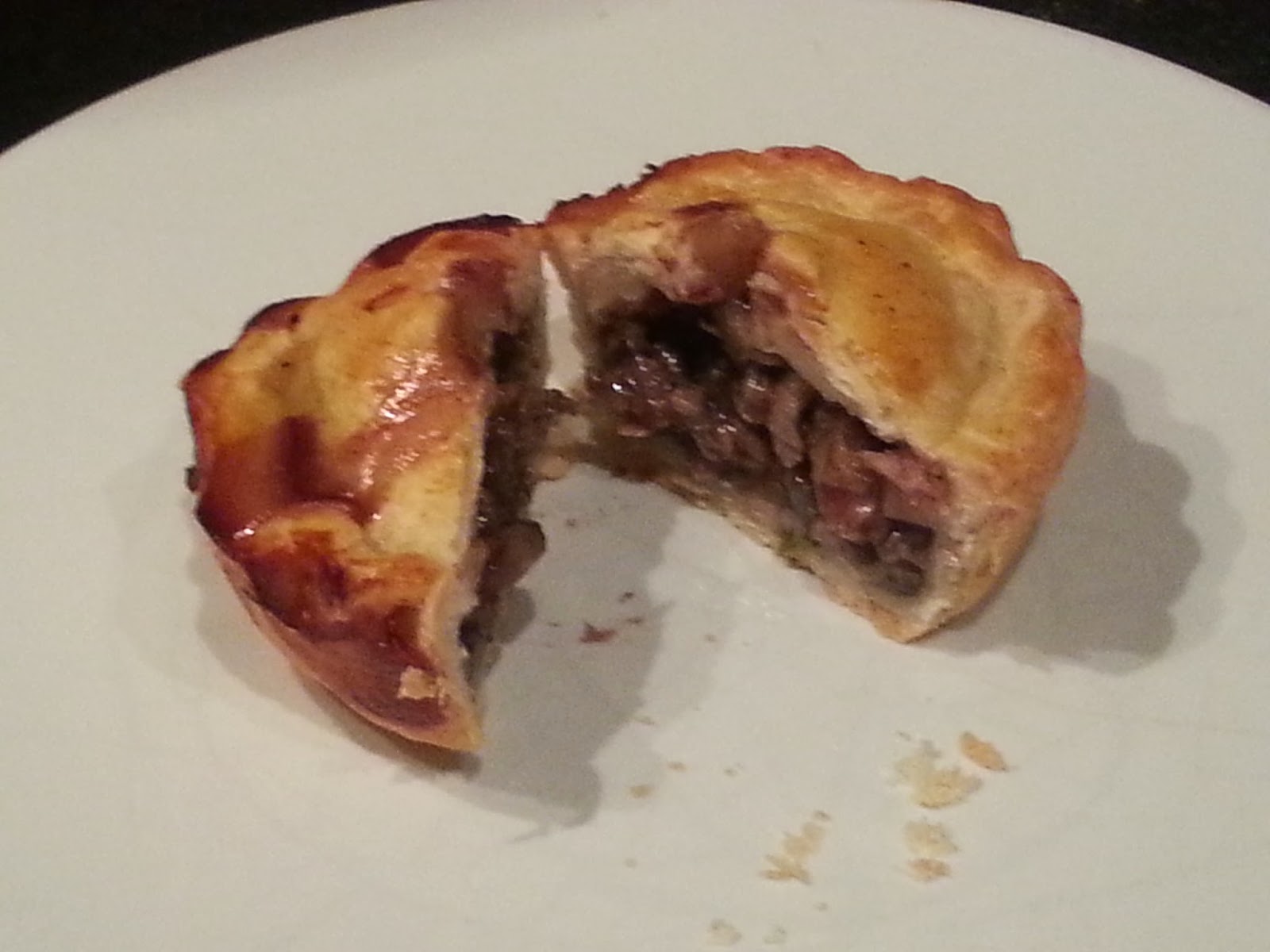 Posted by Neil Buttery at 9:47 PM No comments: 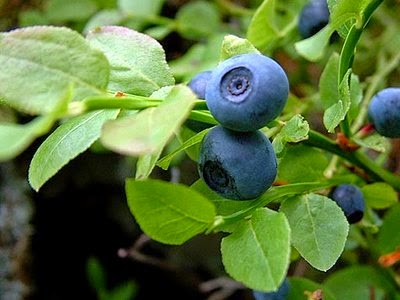 The flitterin faces come doun the brae
And the baskets gowd and green;
And nane but a blindie wud speer the day
Whaur a’ the bairns hae been.

The lift is blue, and the hills are blue,
And the lochan in atween;
But nane sae blue as the blaeberry mou’
That needna tell whaur it’s been.


Here’s recipe from English Food that I have found extremely difficult to cook; blaeberries and blackcurrants simply don’t crop up in greengrocers. Almost all of the blackcurrants grown in this country are snatched up and turned into Ribena, the leftovers being very expensive, assuming you can track them down. Blaeberries are not commercially grown and therefore you have to rely on happening upon bushes - many bushes; you’ll need between 1 ½ and pounds for this recipe!


But then I came across some huge punnets of them at a greengrocer called Elloits in Chorlton, Manchester. I couldn’t believe my luck so I bought a couple and skipped away clutching my precious bounty back home.

So – and I know you are quite likely to be thinking this – what the heck are blaeberries!? They have many aliases: tayberries, bilberries, whortleberries, whimberries, wild blueberries….the list goes on. Blaeberries are very commonly found in the very north of England, Scotland and Ireland. They are quite popular in France – where they are called myrtles – and are generally used to make liqueurs.


Jane Grigson tells us of a rather disturbing song she used to sing at school as a child where a young mother is left distraught when her baby is stolen by faeries whilst she picks blaeberries:

So the blaeberry is steeped in the history of the northern climes of the British Isles, but people are trying to get this wild, rather niche, delicacy cultivated and into our shops. Susan McCallum of the Hutton Institute is asking for people to keep an eye out for blaeberry hotspots so that the most productive plants can be bred. This is because they match the American blueberry for their health benefits, and sales of blueberries are on the increase. Here's the post all about the project.


In this recipe, Jane says we can use blaeberries or blackcurrants in this recipe; I assume because they are both found in Britain, but I think that you should use blueberries as alternative fruit because their flavour is so very close to that of the blaeberry. Jane also uses the Yorkshire trick of spiking the tart with some freshly chopped mint. 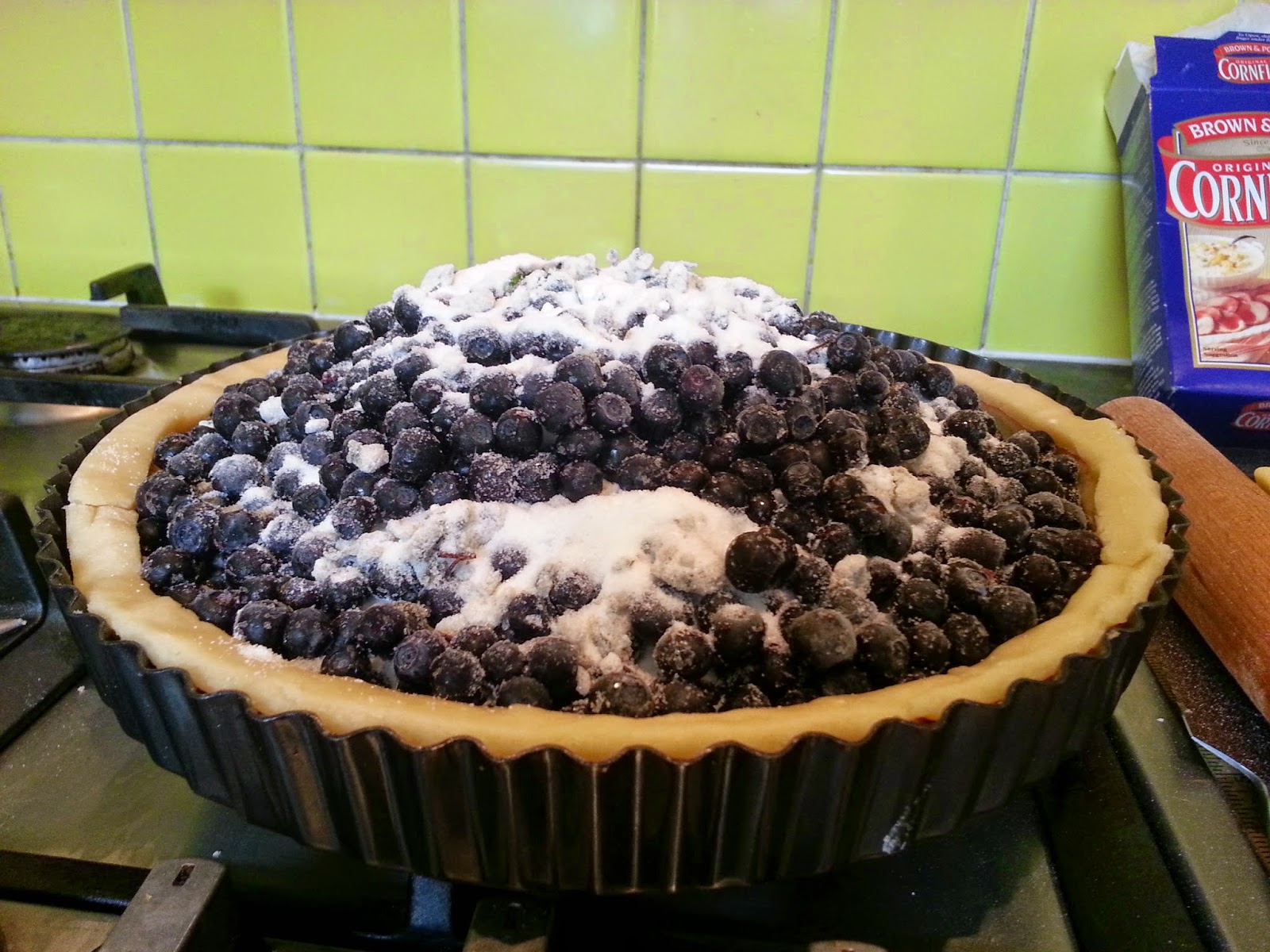 Pick over 1 ½ to 2 pounds of fresh blaeberries or blackcurrants, removing leaves and stalks. Weigh out 8 ounces of caster sugar and mix it with a heaped tablespoon of cornflour and a level tablespoon of chopped mint leaves. Layer the fruit and sugar mixture alternately in a pie dish, making sure the fruit is humps up in the centre and cover with some sweet shortcrust pastry. Brush the pie with water or egg white and sprinkle more sugar on top. Bake at 220⁰C for 15 minutes, and then turn the heat down to 190⁰C and bake for a further 20-30 minutes. Serve with cream. 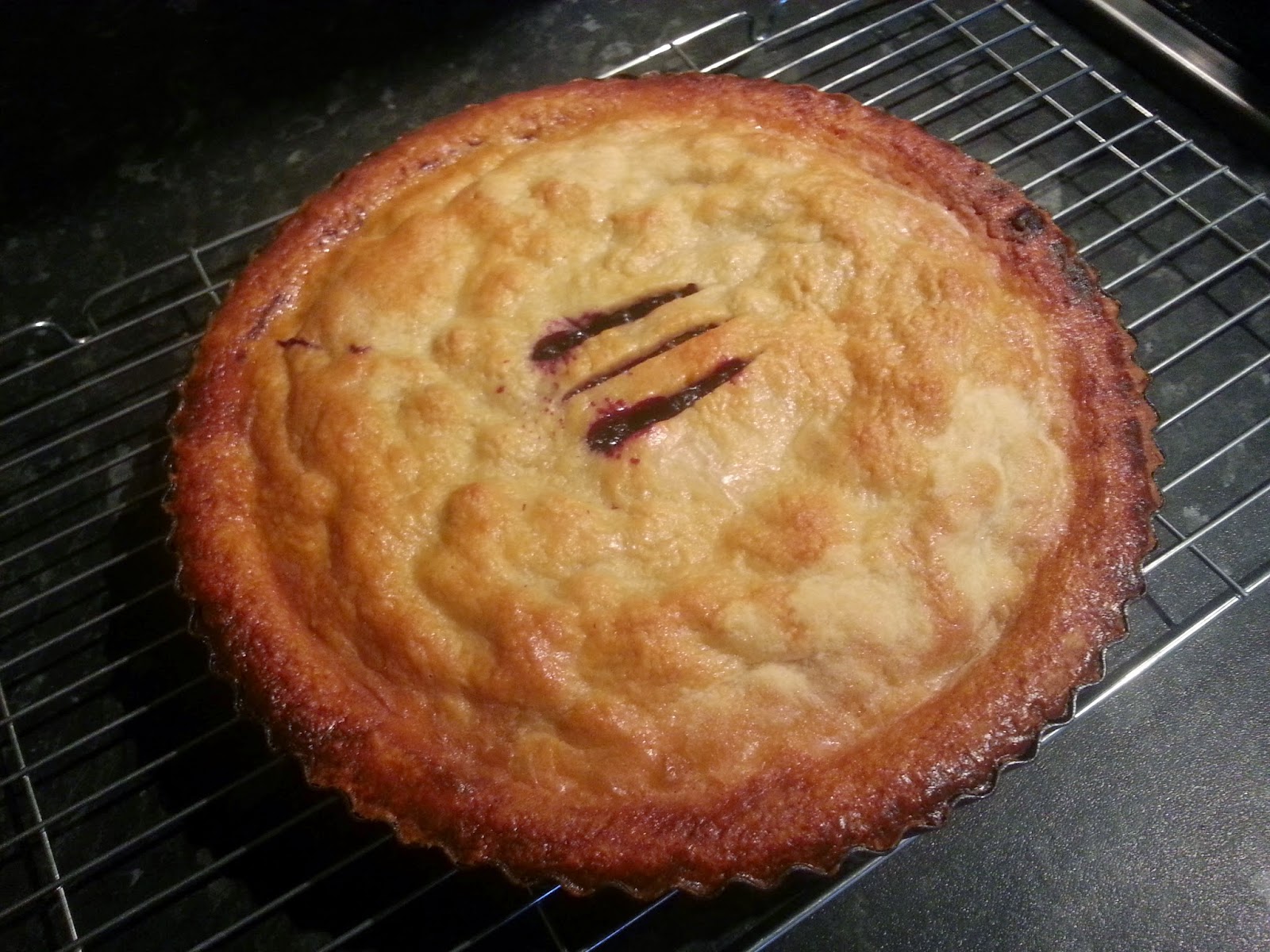 It’s worth mentioning that it can be made as a double crust pie too.


#402 Blaeberry or Blackcurrant Pie. I decided to make this pie for one of my Pud Clubs, and not only did it go down very well, but won – pitched against six other puds! It was so delicious; a deep jammy and tart filling that was so intensely flavoured it was almost a shock, and the aromatic mint took it to another level. This might be up for the award of best pud in English Food! 10/10
Posted by Neil Buttery at 9:10 PM 2 comments: 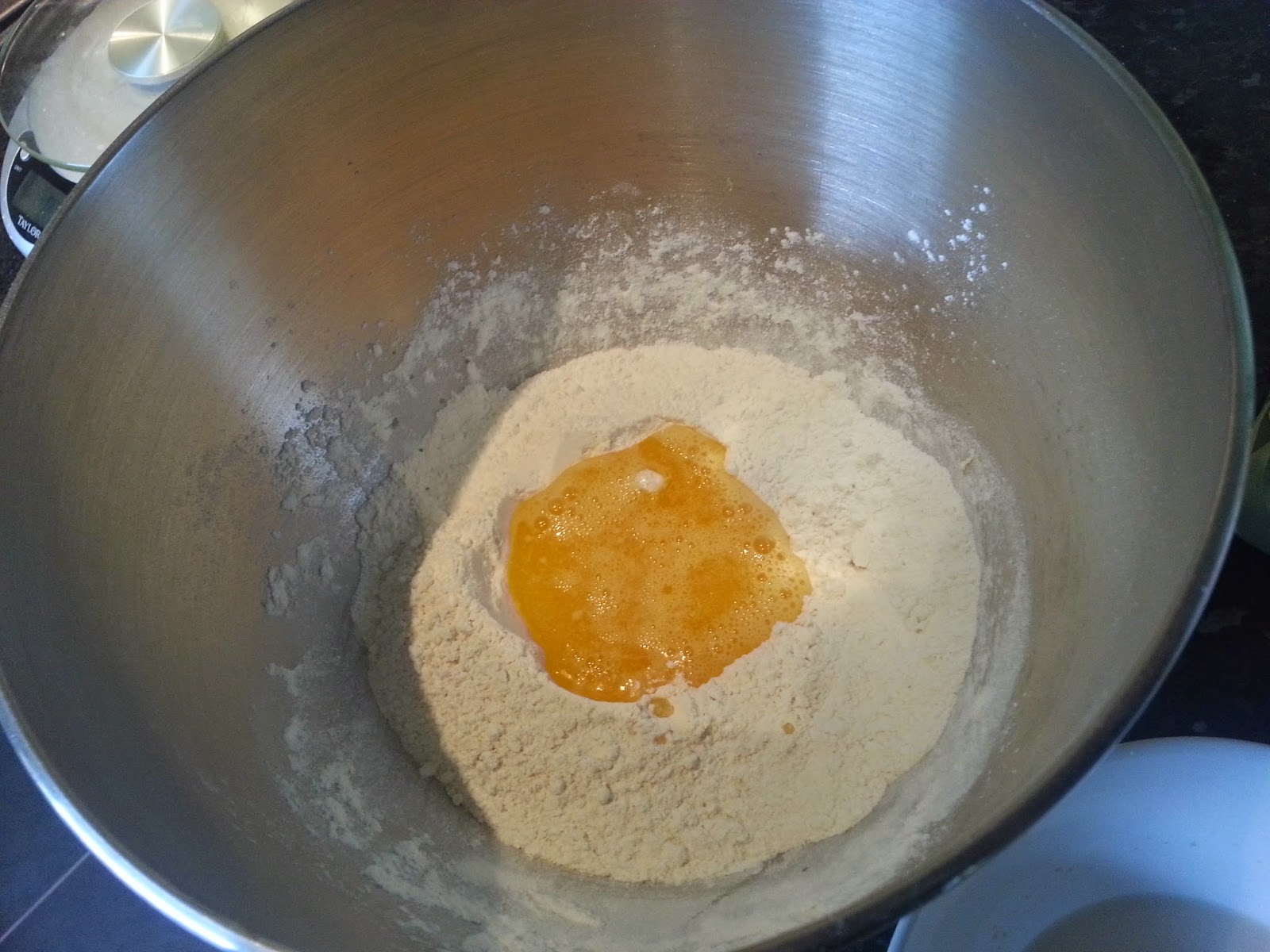 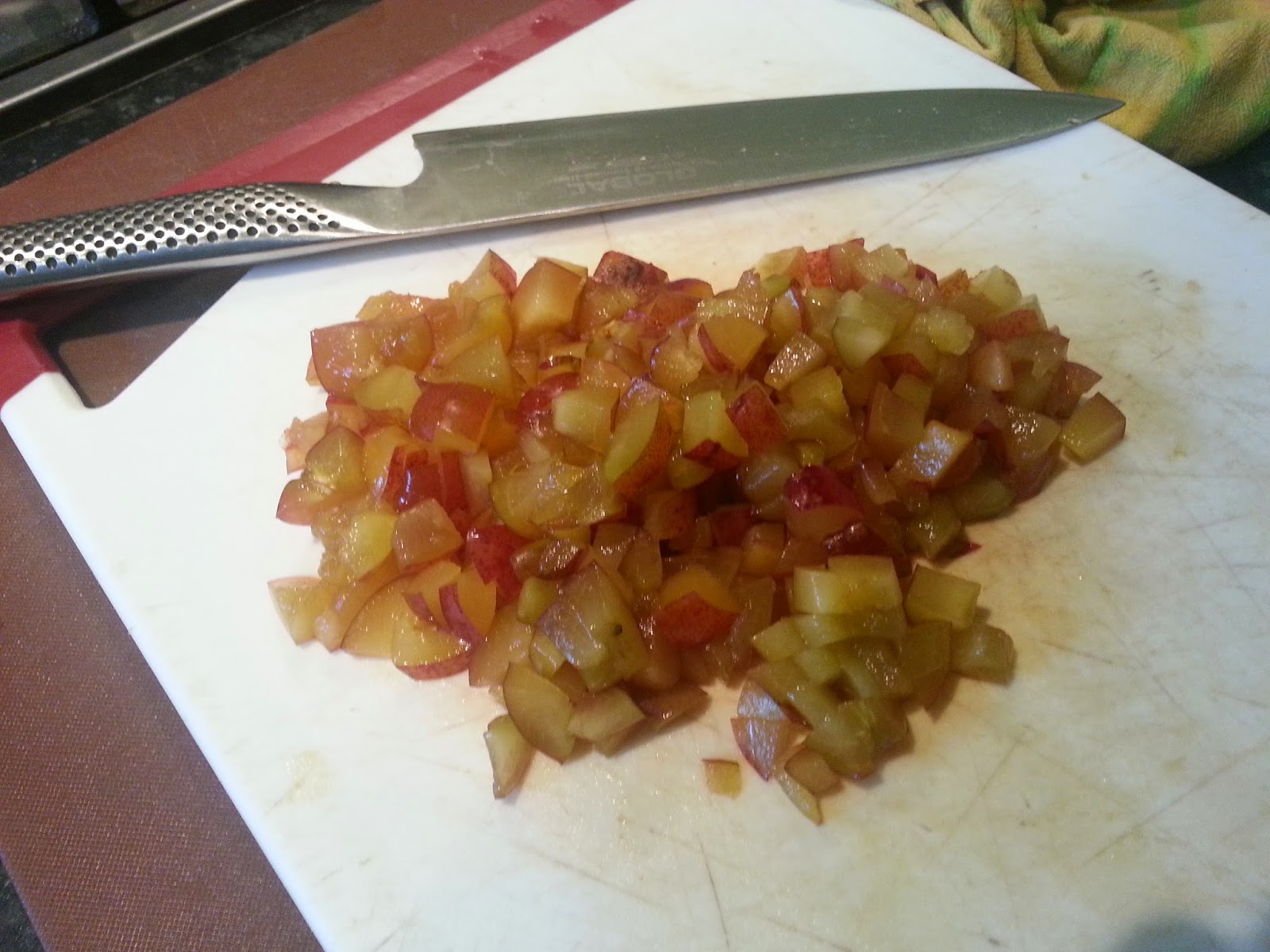 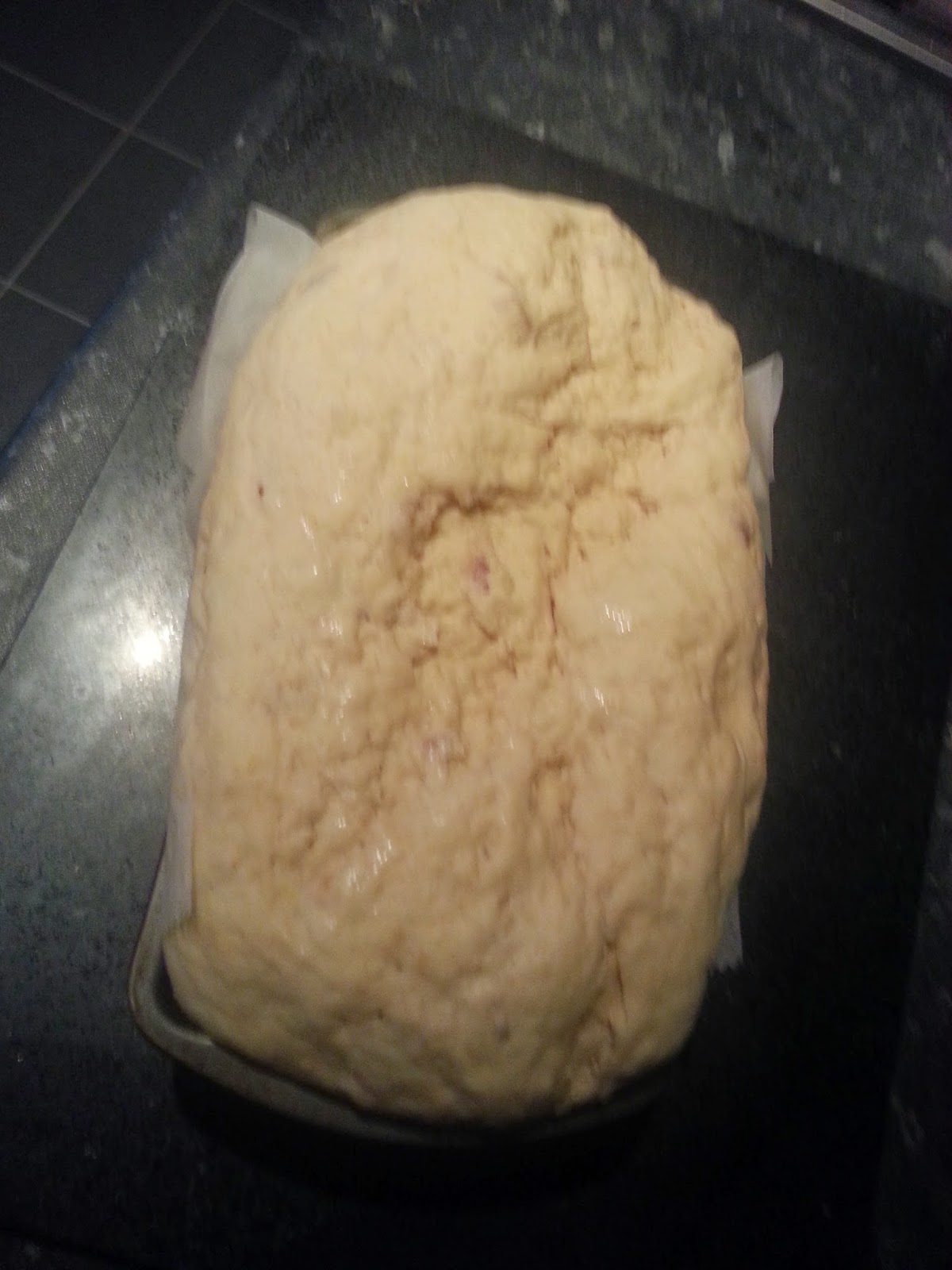 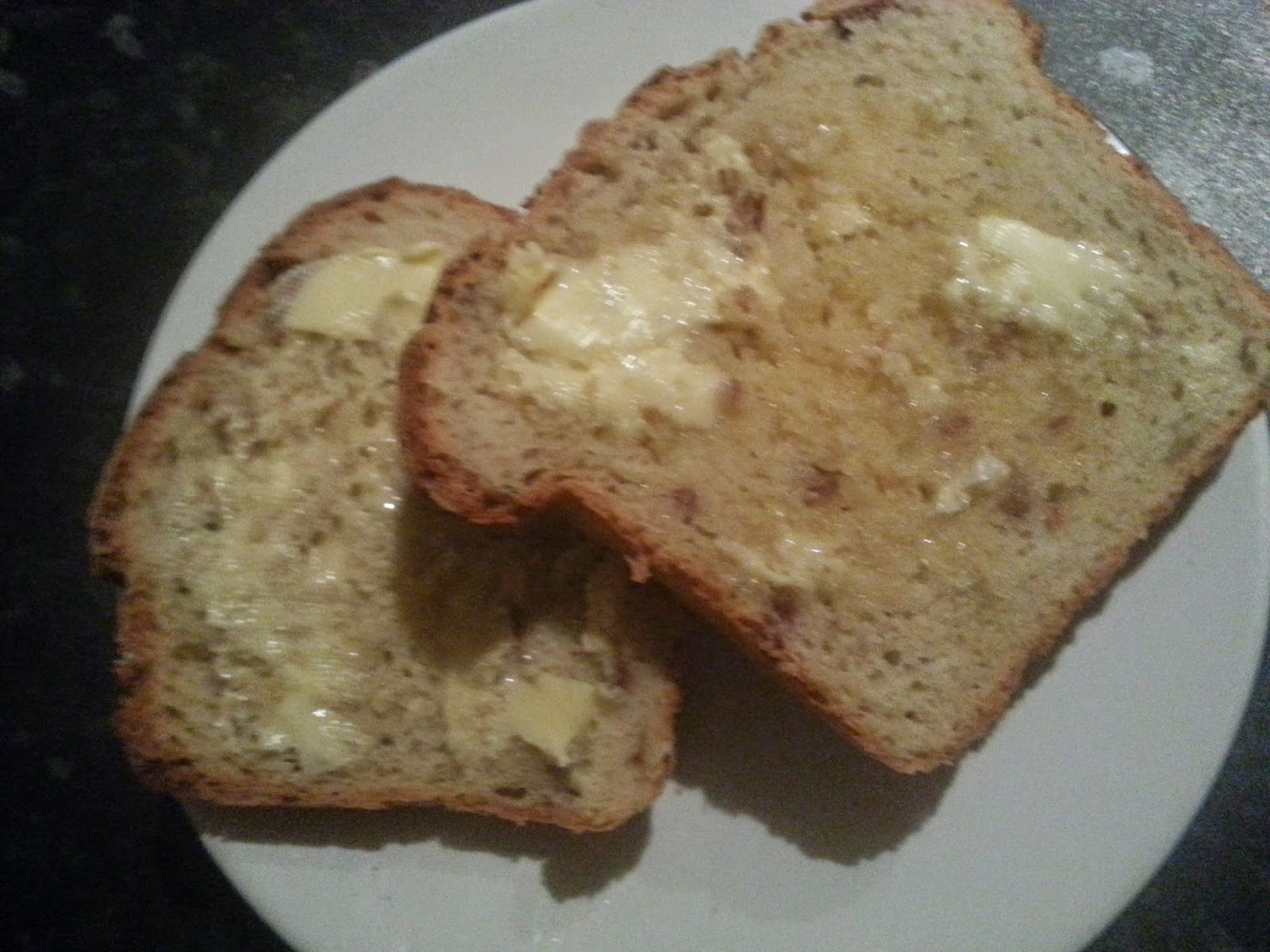 
I’ve chosen this classic piece of meat sculpture for this milestone as it is such a special thing, and hardly seen these days. Plus, doing it Jane’s way means you don’t simply pop to the butcher’s shop and ask for the roast assembled and oven-ready. No, Jane’s way means constructing it yourself; something I really could not have done at the beginning of this project. This saves you a lot of money, and earns you plenty of kudos with your friends.


I did a quick look through some old books and it is odd that this classic and ancient and slightly macabre dish does not seem to appear before the 20th Century. I must be wrong here – can anyone shed any light on it?


To make your own rack of lamb, you will need three things: your lamb, stuffing and a trussing needle & thread.


Ok, now the tricky bit. Go to your butcher and ask for a whole best end of neck; it is from this that you will get your two, perfectly symmetrical, racks. You should get 7-8 cutlets from each rack. Here’s what you ask the butcher to do (in Jane’s own words):

The butcher will desperately try to chop off the long bones and you must insist he does not! At home, you can get the racks prepped by French trimming the thin ends; scraping away the fat from the ribs, just like #305 Guard of Honour. It’s quite laborious at first, but you’ll soon get the knack. 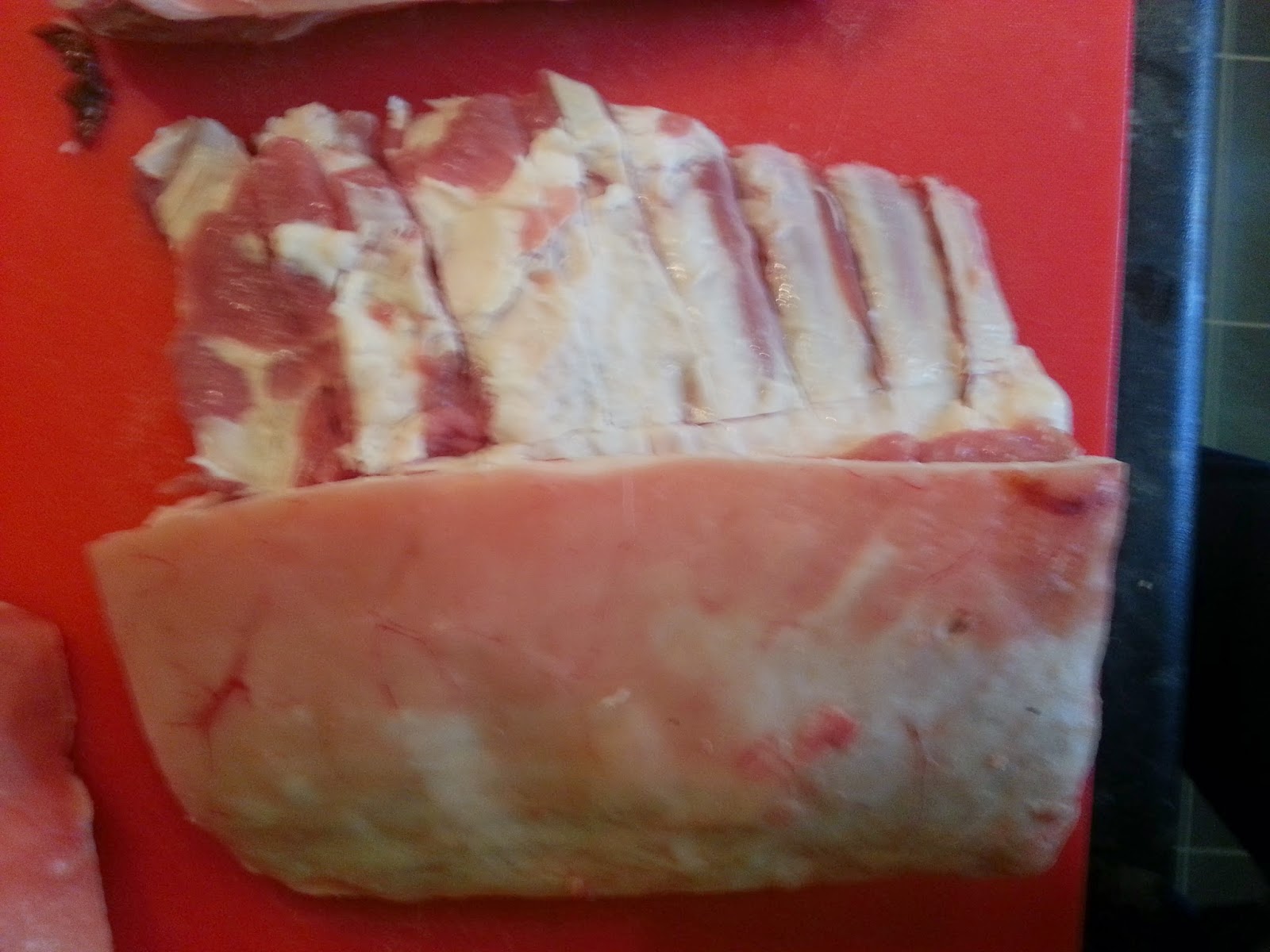 Sit the two racks back-to-back with the fatty sides touching. Take your trussing needle and sew the ends together with two stiches, making sure the thread is tied good and tight.


Stand it up and shape it into a crown using your fist – this is where those little cuts the butcher made are important.  Cover the ends with foil and sit the whole thing on a rack in a foil-lined roasting pan. Season the meat (especially the fat) and fill the centre with your chosen stuffing. 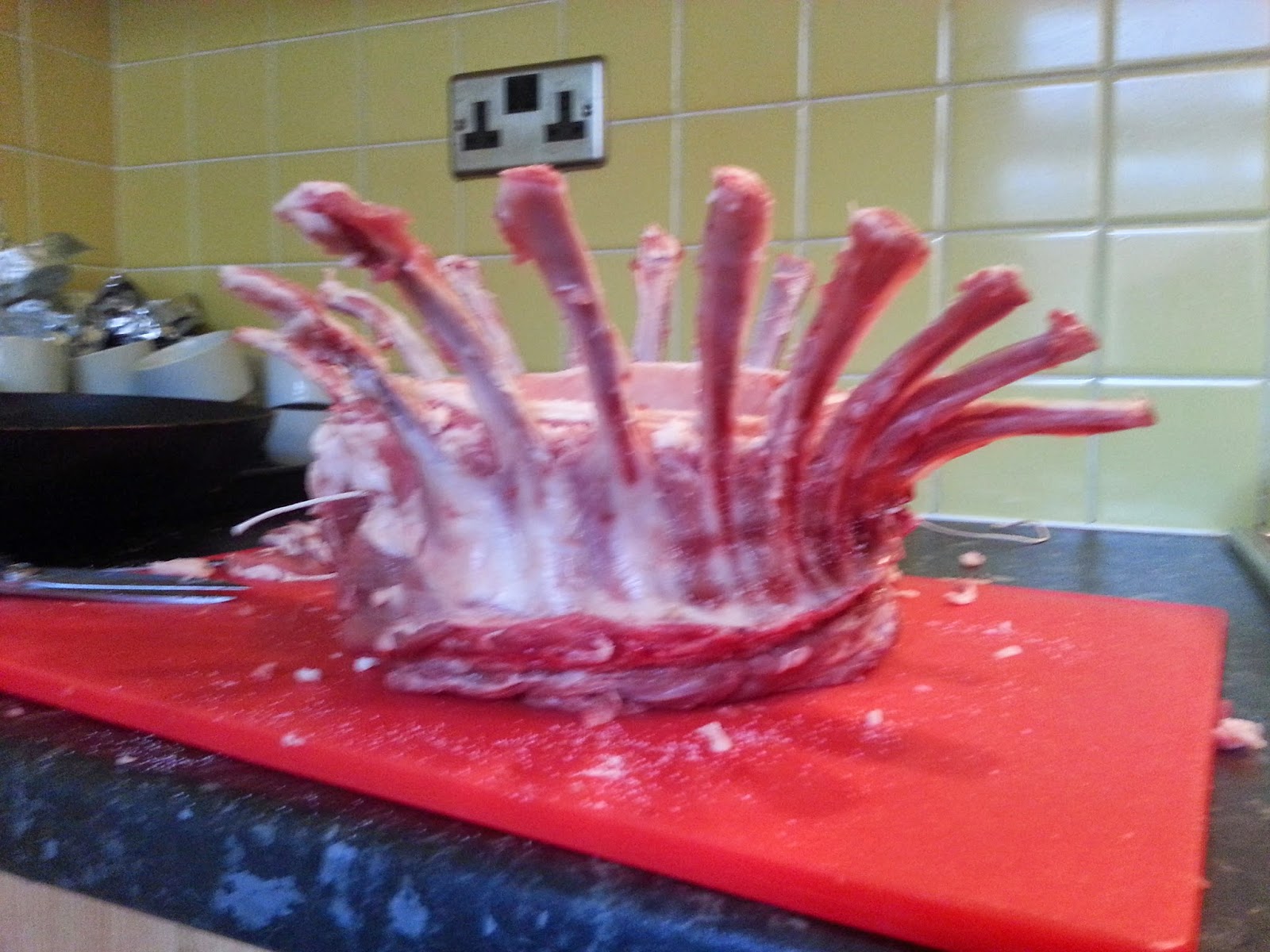 Roast for 75 minutes  at 190⁰C. Remove from the oven, cover with foil and let the meat rest for 20 minutes or so. If you want to be posh remove the foil from the ribs and replace with paper ruffles. 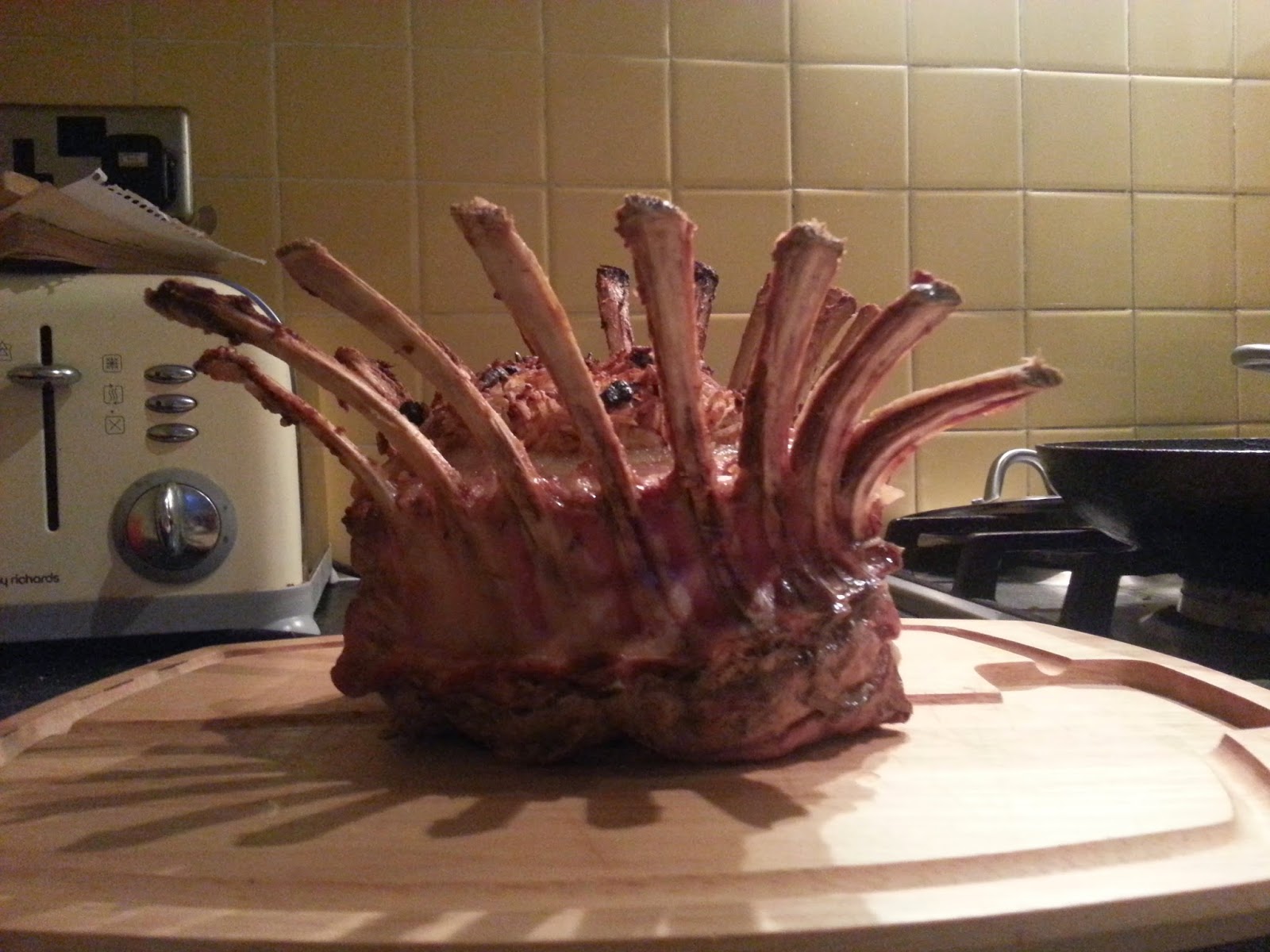 But what to serve with roast lamb? Don’t fear, Grigson has it all covered for us in this post.


#400 Crown Roast of Lamb. What a spectacle this was! I loved the way it looked; not all nice and neat with each rib the same length, but instead the bones were their natural varied lengths, making it look even  more like a real crown. The stuffing was, of course, great and the meat itself wonderfully tender and medium rare. A surprising thing bearing in mind it had been a roasting for what seemed like a long time. The only minor thing is that the stuffing began to char, so I would recommend covering it with some foil for the first half of the roasting. Nevertheless, still marvellous. 10/10. 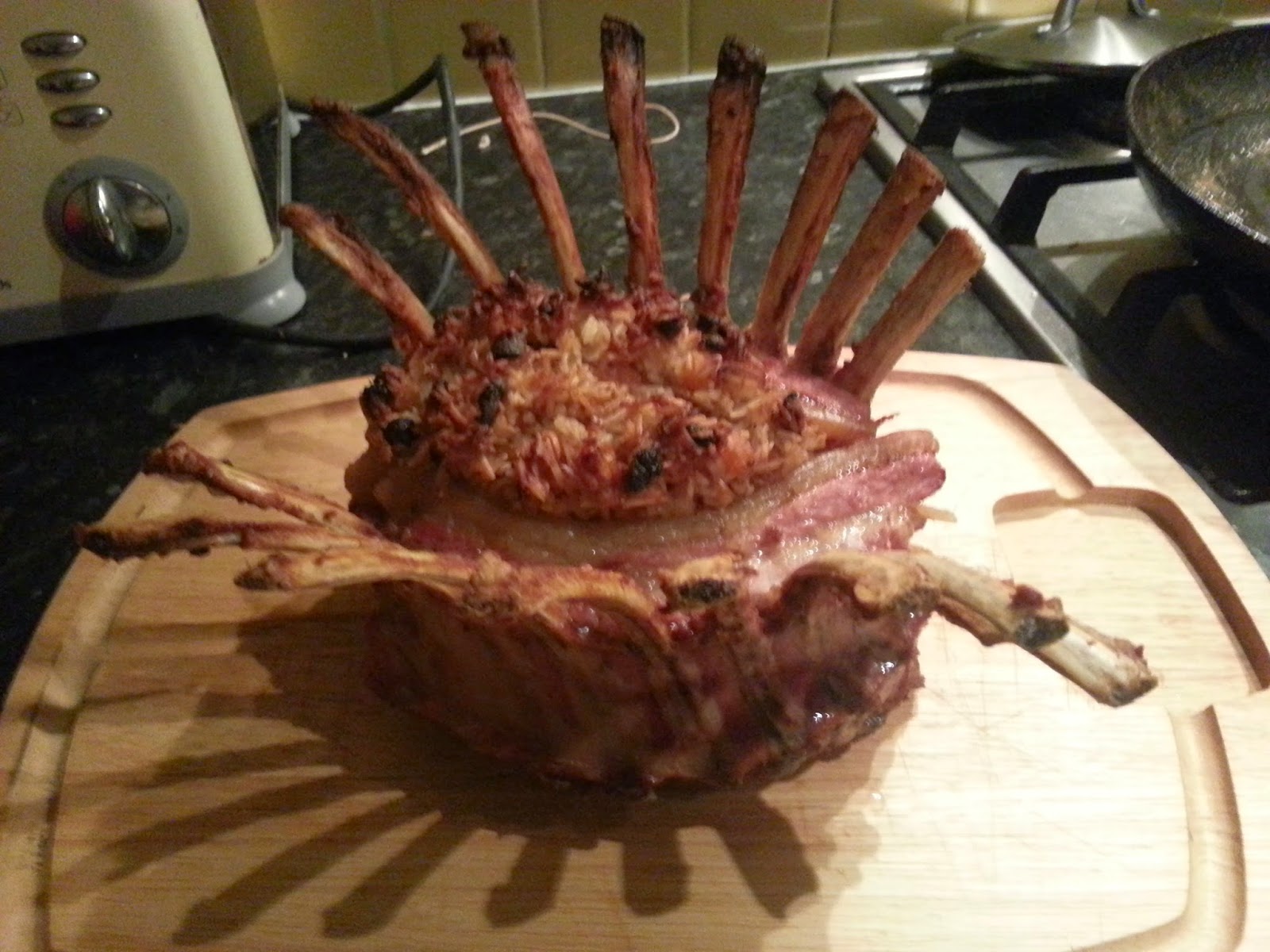 Posted by Neil Buttery at 9:25 PM No comments: