Redcurrant jelly is such an English sundry. Delicious with roast lamb, an essential ingredient in #45 Cumberland Sauce and venison sauce, and a great addition to a ham glaze.


A couple of things are interesting here: first the spice, and second the addition of vinegar. Jane likes adding tart vinegars to here sweet preserves that are used in savoury dishes. It was a revelation when I first came across it, making #367 Hot Red Pepper Jelly, which I was so impressed by I’ve been making it for the market stall.


In the past it has been difficult to get hold of redcurrants in grocers and supermarkets, but this year they seem to have been everywhere. However, I was prompted to make this jelly when I spied a heavily-laden redcurrant bush nestled among a load of 5-foot high weeds in an unruly corner of a vacant plot next to my allotment. How there was so many with all that competition from the weeds I do not know. Naturally, I had forgotten my phone, so I couldn’t photo it. I picked just a fraction of what is asked for in the recipe, but it is very straight-forward to scale down (or up). 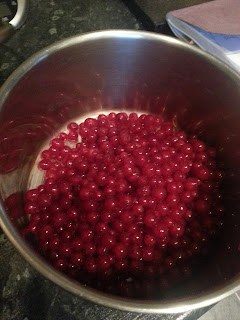 Pick over 3 pounds of redcurrants, no need to remove stalks and leaves, and pour into a preserving pan, large saucepan or stockpot along with 1 ½ pints of water, 3 cloves and a teaspoon of ground cinnamon. Turn up the heat and bring to simmering pot and allow it cook until the currants have softened enough to burst open. Strain through a scalded jelly bag and allow it to slowly drip through into a clean bowl overnight. 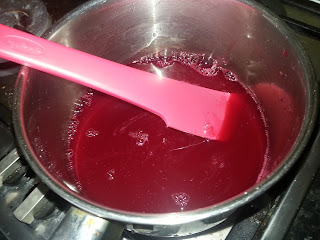 Next day, pour the strained spiced juice into a clean pan with 3 pounds of granulated sugar and 8 ounces of malt vinegar. Put on a medium heat and stir until the sugar has dissolved, then turn up the heat and allow the jelly to boil for around 10 to 15 minutes before testing for a set. To do this put a few drops on a cold saucer and allow it to cool. Push the jelly with your finger, if it wrinkles, it has set, if not, boil for a further 10 minutes and check again. Alternatively, you can use a jam thermometer – a temperature of 105⁰C is the magic number. 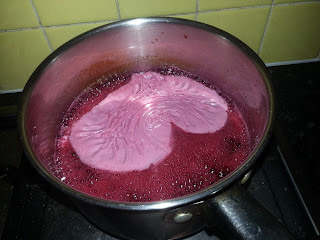 Don't worry about the scum, it's easily got rid of
Let the jelly cool for 10 minutes and remove the scum either with a spoon or by beating in a small knob of butter until the froth dissipates. Pot into sterilised jars. 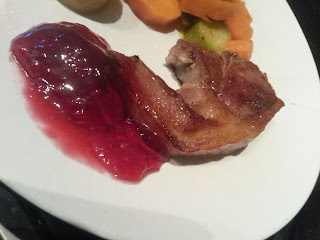 #383 Spiced Redcurrant Jelly. This is very good indeed. It has a pleasantly sweet and sour tang and is the most beautiful ruby colour; nothing like the bought stuff at all. I used it to accompany some lamb chops one day, and used it to make some lamb gravy on another. The sad thing is that now I have to until next summer to make some more! 8.5/10
Posted by Neil Buttery at 9:28 PM No comments:

The third in a laverbread trilogy… the first post #352 Laverbread and Bacon tells you a little more about the mysterious iodine-tanged, deep-green gelatinous goo. Thanks to Jane Grigson it is goo I have grown to enjoy very much, and something I would never have tried had I not undertaken this project. Whenever I visit Wales I always come back with a tub of the stuff. Cheers Griggers!


This is a very quick and easy recipe that cleverly uses the flavour of orange to cut through and temper the very rich seaweed. It goes with roast lamb, ‘especially roast lamb and new potatoes’. It also goes with most fish; in Wales it is often eaten with cockles. Jane says that a hotelier friend of hers served it with lobster and it was ‘a most successful combination’. 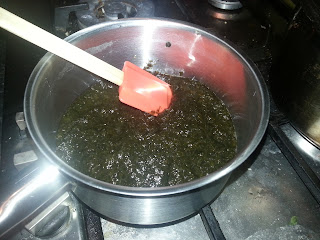 Heat up 8 ounces of laverbread with the grated zest and juice of an orange, then season with lemon juice, salt and pepper. That’s it! 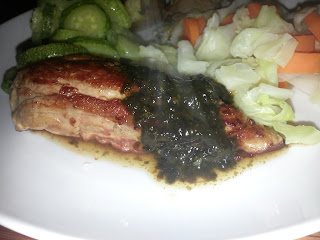 #382 Laverbread as a Sauce. This was a delicious sauce that was much lighter and more accessible than the sauce in #353 Roast Rack of Lamb with Laverbread, which was not for the faint-hearted. Lovely and light, I give it 7.5/10.
Posted by Neil Buttery at 9:45 PM No comments: