The Griddle Cakes & Pancakes section of the Teatime chapter was somewhat of a mixed bag, containing several disappointments and one of the best, and possibly the most cooked recipe in the whole book. Inside the chapter are  some of the oldest and best-loved recipes in England. Crumpets and Muffins are sole decedents of yeast-leavened griddle cakes, prior to the invention of raising agents in the mid-18th Century, and oatcakes have been made in England for millennia. 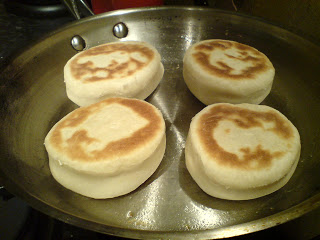 We usually think of griddle cakes as leavened mixtures and pancakes as unleavened, like a crepe, but really it seems like these  two terms really mean nothing; there are thin batters, thick mixtures with or without raising agents called pancakes it seems.
Wherever they lie on the pancake-griddle cake spectrum, they were typically baked on a thick cast iron skillet, griddle iron (also called a girdle) or bakestone. These days, bakestones are too made of cast iron, but they were once made from smooth flat stones which, once made hot in coals, could retain their heat and cook many cakes evenly and efficiently.

King Alfred burns the cakes
It is these sorts of cakes that in the Dark Ages, Alfred the Great, King of Wessex, famously burned when he took shelter after battle in a poor woman’s home. Not knowing who he was, she asked him to watch them as she sent out to collect more wood for the fire.  Distracted working out future strategy, he got a stern telling off when she returned and found them blackened. Full story here.
Although this is a book of English food, there are several Welsh recipes, and they are much superior to the English ones. The highlight of this part of the book is Welsh Light Cakes; lovely frilly griddle cakes made with tangy soured cream. Not recommended however, is the West Yorkshire Riddle Bread, boring, rubbery, bland, and just unpalatable; they were a mystery (a riddle?) to me. I must admit I was not very confident cooking many of the recipes at the beginning of the project and really I should revisit them – the best will be reblogged on the ‘other’ blog at some point. Singin’ Hinnies are first in the queue. 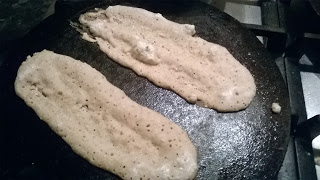 Posted by Neil Buttery at 12:01 PM No comments:

This is the last recipe in the Griddle Cakes & Pancakes part of the Teatime chapter – and it was one I have been looking forward to; I am from the West Riding of Yorkshire (a place called Pudsey, which is nestled between Leeds and Bradford), but I had never heard of Yorkshire oatcakes or ‘riddle bread’ until I thumbed through English Food. In Jane’s introduction she described a letter from one of her readers who complained of the difficulties of purchasing oats in Liverpool. The reader, who was from Yorkshire originally, really missed her riddle bread and wished she could get hold of some. How odd that in the 1970s people could not buy oats in the North of England!? It’s the one cereal crop that loves bleak and damp climes and was grown in abundance in Lancashire, Yorkshire and the rest of Northern England and Scotland.


Oats are considered a superfood these days and are widely available, though fine oatmeal is required in this recipe, which can be tricky to get hold of. I wonder if this was what Jane’s Liverpool writer was after. You are unlikely to find it in supermarkets, but some health food shops might stock it. I found some online at a reasonable price. 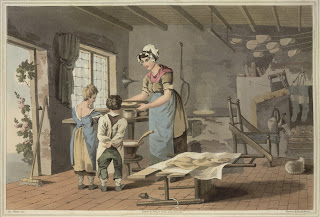 Making oatcakes - picture from the book The Costume of Yorkshire

I am a huge fan of oats in all forms (however, see below) and really love the Derbyshire oatcake: a large soft, slightly rubbery disc that can be eaten like a pancake, rolled up dripping with butter and sugar. I assumed riddle bread would be the same, but no.


Jane gives detailed instructions on how to make the riddle bread, according to her it made from a batter of fine oatmeal, yeast, salt and water which is quickly ladled and flung in strips across a hot bakestone (or bakstone, if you want to use proper dialect). This produces a pancake with a smooth underside and a bumpy upper side ‘riddled’ with holes. The strips would be hung up before the fire in a wickerwork basket called a creel, or in a kitchen so that they could dry out and be sprinkled into soup. As often with these traditional recipes, it is hard to picture what the technique used actually is, so I cross referenced. Jane usually credits her sources, and she found out about this method in a very good book called Good Things in England, written by Florence White in the 1920s, but there was no extra information to be gleaned.


The odd thing is I cannot find another method for making this riddle bread that matches Jane and Florence’s description. All other sources describe a batter that is shaken upon a chequerboard-like griddle to spread it out and hasten the cooking process, similar to the process of riddling corn, hence ‘riddle’ bread. They could be eaten straight away with plenty of butter like a crumpet or pikelet. This seemed a much easier way of doing things, but, alas, I have to follow Jane’s instruction, so here goes:


With a fork, cream half an ounce of fresh yeast in a little just-warm water and allow to froth. As you wait, mix together in a bowl a pound of fine oatmeal and a ‘scant’ teaspoon of salt. When it has attained a decent head, tip into the oatmeal and whisk in enough warm water to make a batter the thickness of double cream. 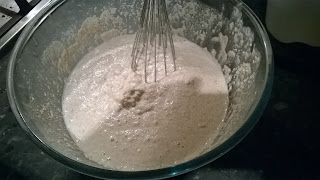 Get a cast iron bakestone or griddle on the heat and brush with very little oil or lard. Test the heat with a drop of batter; if it puffs up quickly, it is hot enough. Cast a ladleful of the batter across the bakestone in one swift stroke (this may require a few test flings). If you have the heat of the stone right, it will bubble up all around the edges. 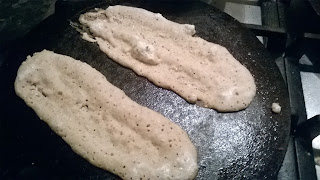 Once the top has lost its rawness, it can be removed and dried out. Jane suggests doing this on string or clothes rails. I found this impossible to do; the lack of gluten in the oats made somewhat brittle pancakes. Instead, I just placed them on drying racks in the oven on a very low heat until dry.
Now the little strips of riddle bread ‘can be used for soups, fish, fowl, cheese, butter, or any other kind of meat in place of any other kind of bread or biscuit.’ My strips were withered sploshes, I’m sure, compared to the foot long ones prepared in bakeries of yore. 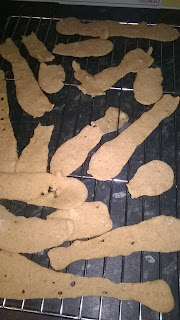 #417 West Yorkshire Oatcake or Riddle Bread. ‘The flavour is slightly bitter’, says Jane, ‘and very appetising’. Well I don’t know what I did wrong here, but they were not appetising at all. I tried some fresh from the stone and they were okay, but the dried ones were as dull as dishwater. I tried reheating them and crumbling them into a stew, but however I ate them, they were not appetising. They were not inedible though, so I give them a 2/10.
Posted by Neil Buttery at 8:04 PM No comments: