Seaweed is not so popular in this country and this recipe requires two different kinds. The first is dulse and I have used it before to make #307 Mashed Potato with Dulse. There’s some information about dulse on that post, should you want it.
However, the other seaweed – the one the fish is stewed in – is not so familiar. It is called fingerware, and according to the recipe, comes in ½ ounce (or 15g these days) packets. I could find no mention of fingerware in any of my books, or in shops. I did manage to find its Latin name in A Dictionary of Food and Nutrition by David A Bender, but that was all I found though. Here’s the full entry:
fingerware Edible seaweed, Laminaria digitalia
This name sounded familiar (being an ecologist one picks up the Latin names to some organisms), and it turned out to be good-old kelp. Now I had something to try and order. Unsurprisingly, I was able to find it on Amazon, but only in massive triple packs. Hey-ho. It just had better be bloody nice! 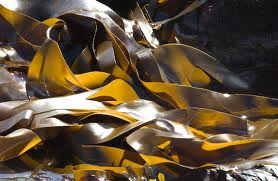 Fingerware, Laminara digitalia, in situ
Now I had my two seaweeds I could cook the recipe, which, by the way, is one that Jane modified from a book from Karin Perry's Fish Book. Originally, halibut was used, but you could also use any round sea fish like sea bass, cod, or grey mullet. 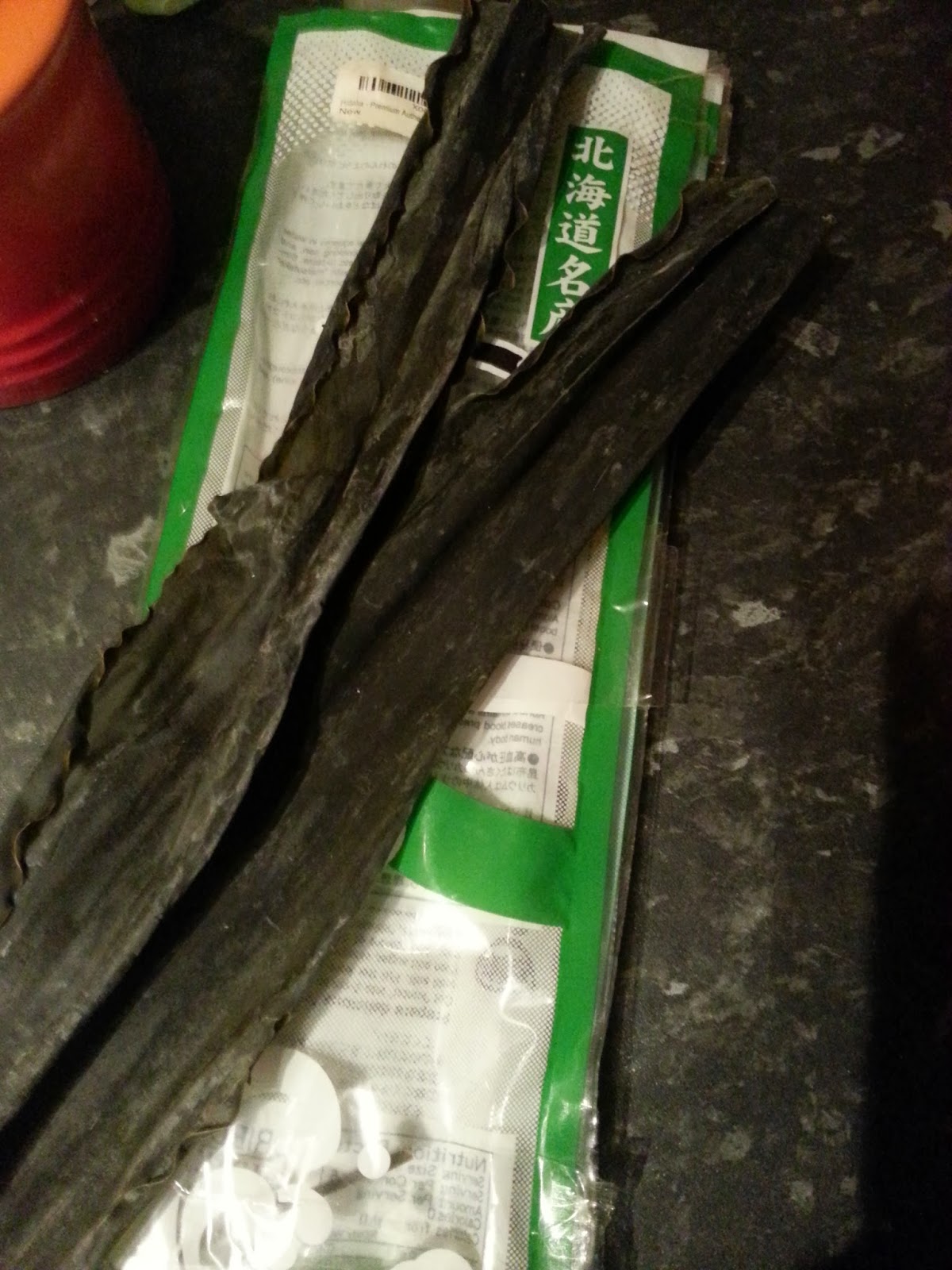 Fingerware how I received it.


Begin by preparing your whole salmon. According to Jane, it should weigh somewhere around 2 ½ pounds, mine was a little larger because the only salmon available to me was farmed, and they grow much larger than wild salmon. Anyway, give the salmon a rinse and pat it dry. Leave out in the kitchen for it to warm to room temperature for 30 minutes or so.
Next prepare the fingerware, you’ll need ½ ounce of it. I could only get it in huge sheets, so I cut out a piece and cut that into broad strips. Pour boiling water over it and leave it to rehydrate for 30 minutes.
While you wait, get the fish kettle ready: place two upturned ramekins inside end-to-end to act as a stage for the rack; the idea here is that the fish cooks in the steam rather than in the water. Lay the fingerware over the rack and then brush the upper side of the fish with some melted butter. Season it with salt and pepper, and then lay the fish butter-side-down on the rack. Brush the other side of the fish with more melted butter and season. Don’t forget to season inside the fish too. Lay the rest of the fingerware over the fish. 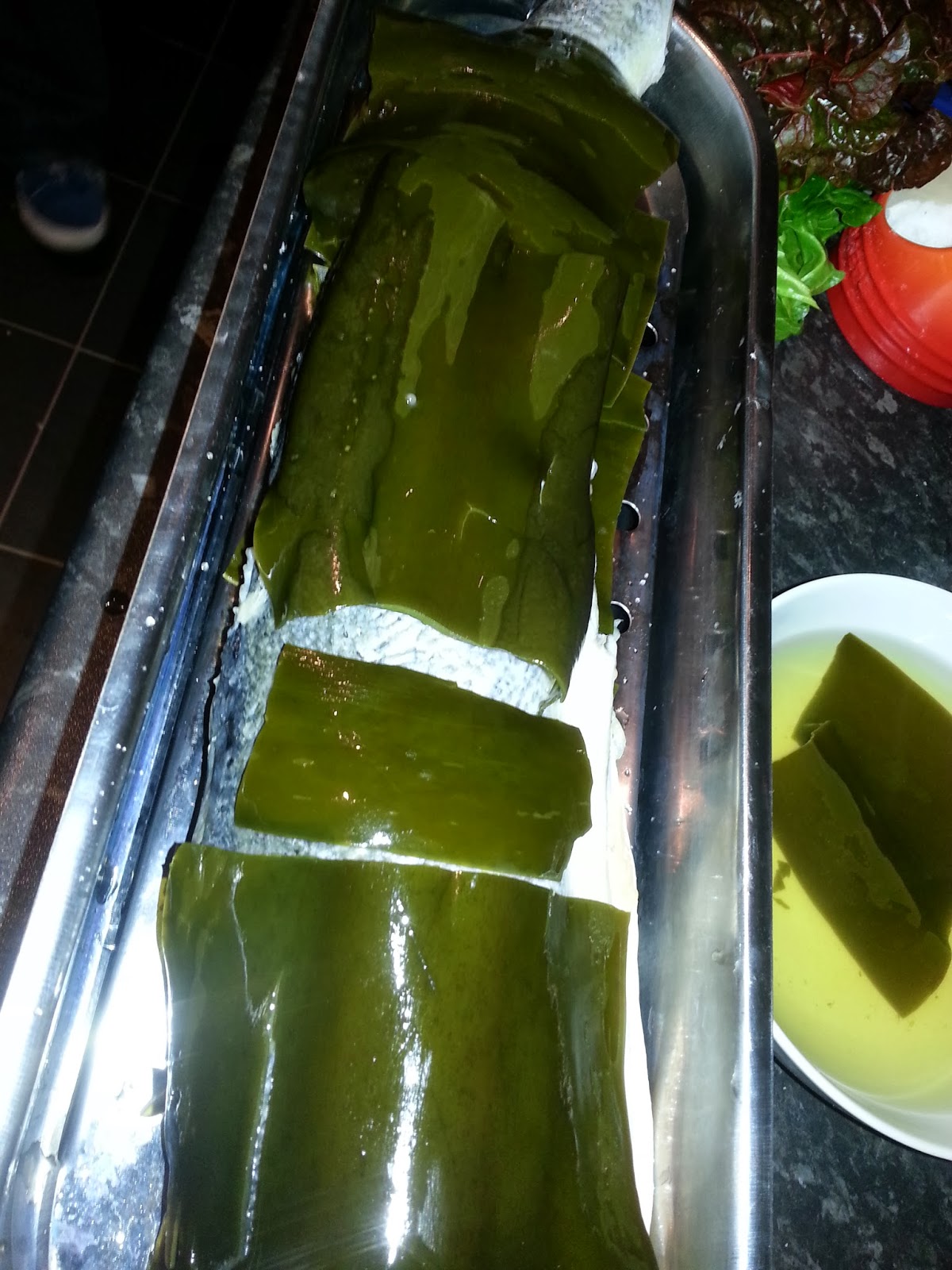 Next, get some hot water on ready to pour into the kettle. Cut a piece of kitchen foil large enough to cover the fish in its kettle; the lid cannot be used because of the ramekins. Pour in the hot water, then place the rack and fish inside the kettle. Cover with foil, put over two burners and steam for 15 minutes.


When the time is up, have a little look and see if the fish is done. You could use a knife to have a little inspection, or pull a fin; if ready the fin should pull out in a satisfying way. If not ready, leave another 5 minutes.
When done, take the kettle from the heat, but keep the foil over it for another 15 minutes. While you wait, prepare the hollandaise sauce.
Take 2 tablespoons of crumbled, dry dulse in a bowl and pour over it boiling water. Leave for 2 minutes, strain it in a sieve and refresh with cold water. Pat dry with kitchen paper.
Start by cutting 7 ounces of softened unsalted butter into small cubes. Place 3 egg yolks in a bowl along with a tablespoon of water. Whisk well and then place the bowl over a pan of simmering water. Then, whisking all the time, add one or two cubes of butter and when incorporated add a couple more cubes until all the cubes are used up. Season with salt, pepper and lemon juice and stir in the dulse. 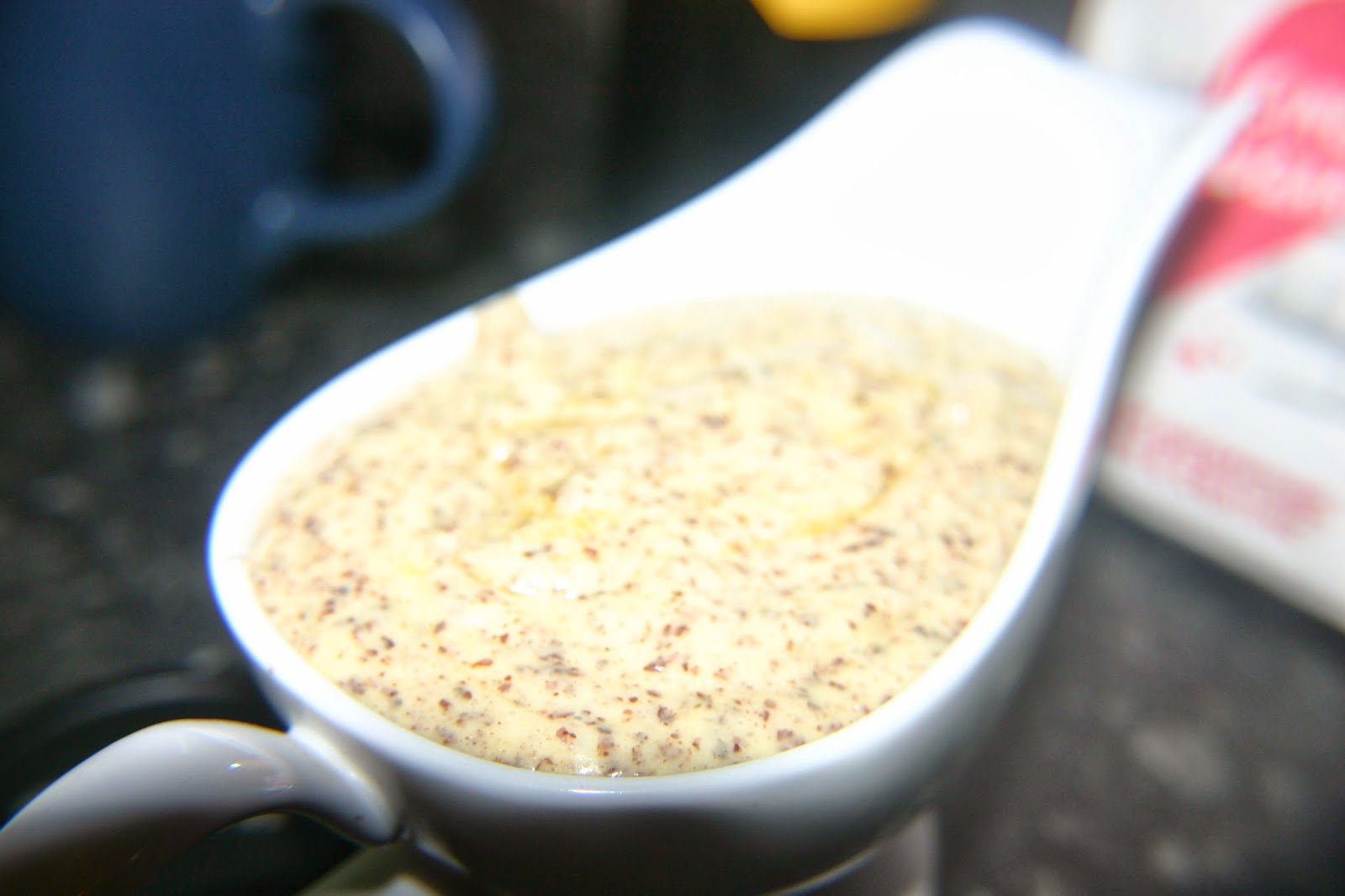 Transfer the salmon to a serving dish and pour the sauce into a jug.
When portioning out the fish, Jane suggests, giving each person a small piece of the fingerware. She also suggests to accompany it with boiled new potatoes and samphire or blanched cucumber or mange tout. 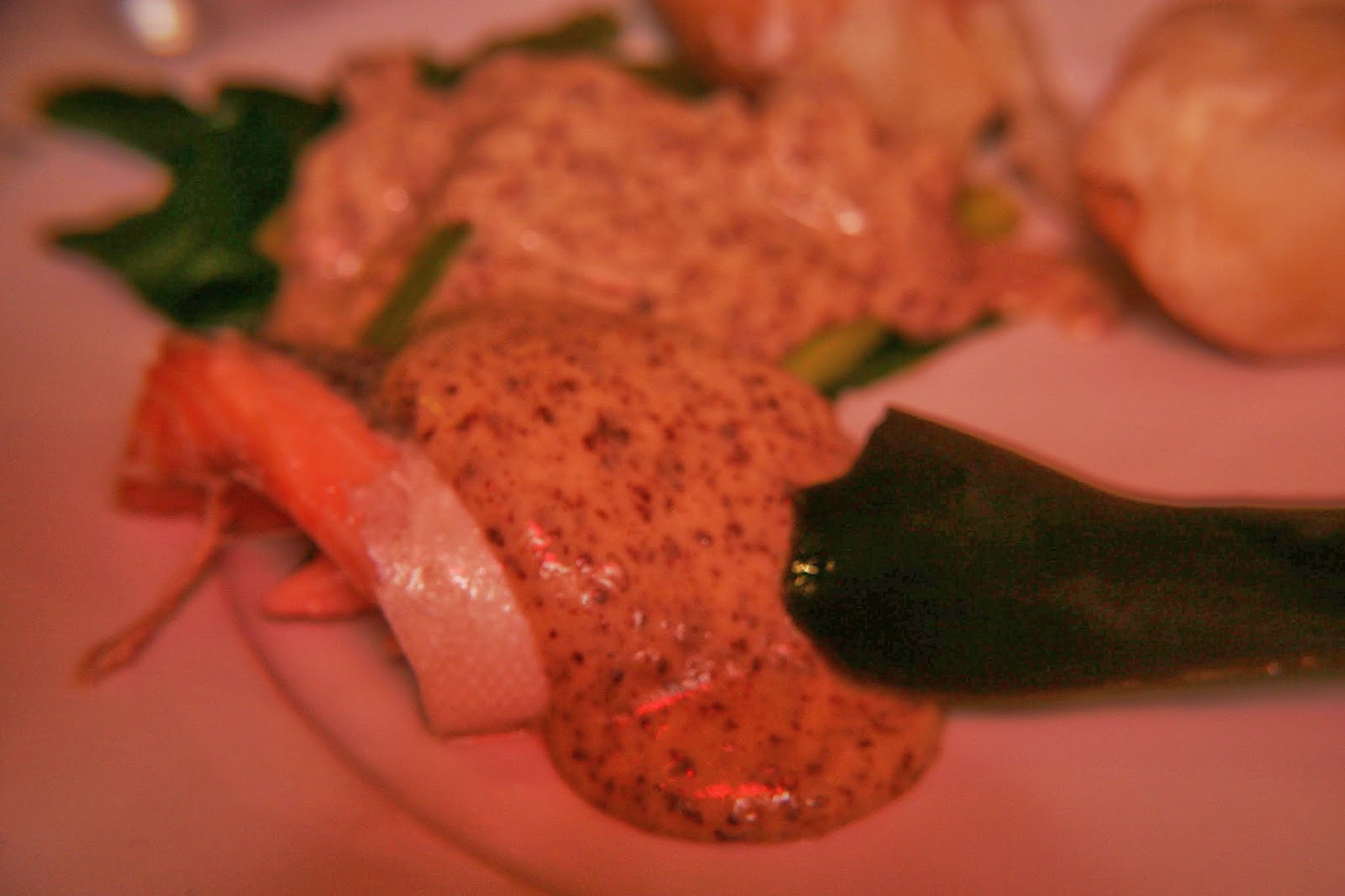 #389 Salmon Stewed in Seaweed with Dulse Hollandaise. Hmmm. A tricky one to judge, this one. I thought the salmon was cooked very nicely and one cannot ever complain about hollandaise sauce. The problem was the seaweed didn’t seem to add anything at all to the dish. I think if I had used partially-dried dulse like you can get in Ireland, fried it to make it crispy and used that in the sauce, it would have made a world of difference. For that, it loses points, so let’s say 6/10.
Posted by Neil Buttery at 10:03 PM 4 comments:


There are no Christmas recipes in English Food left to cook, but this one is close, being a cross between a savoury lamb pie and a sweet mince pie. It’s a recipe that has no introduction from Jane Grigson, though I feel it should, as it is pretty strange-sounding: a pie with a minced lamb, dried fruit and apple filling. Though it hails from Westmorland (a now defunct northern English county now made up of bits of Cumberland, Lancashire and Yorkshire), it seems to me to be a very typical pie baked during the medieval period, where it was very common to cook meat with lots of dried fruit and spices.

The Westmorland Coat of Arms
Why was this done? After all it seems to be an odd combination. Many people say that it is because heavy use of fruit and spices masked the taste of rancid and rotten meat. This, however, is a total myth; the reason meat was combined with spice, dried fruit and sugar was because all of these ingredients were extremely expensive. It was all showing off. They are – in my past experience – also a good combination: previous recipes like #87 Mrs Beeton’s Traditional Mincemeat and #328 Salmon in Pastry, with a Herb Sauce follow the same principle.
By the time of the Victorian era, none of these ingredients were particularly expensive, and this sort of food fell from favour, the only surviving remnant being the now totally meat-free mince pie.
This pie is known as a ‘plate pie’, which is still commonly made in Northern England. It is simply a pie made, not in a tin, but on a plate. The plates can be of typical (ovenproof!) ceramic or formed from enamel. Whichever you use, make sure it is deepish. My Mum still makes both sweet and savoury plate pies.
To make the pie, start with the filling. Mince together 6 ounces of lean, boned lamb with 3 ounces of lamb fat (you can the butcher for fat trimmings or keep your own and freeze them until you have accrued enough). Mix these together along with 6 ounces of apples, any will do, but I used tart Bramleys, 4 ounces each of currants, raisins and sultanas, 2 ounces of candied peel, the juice of one orange and half a lemon, 2 ounces of blanched, slivered almonds, 4 tablespoons of rum, a good pinch of salt, freshly ground black pepper, half a teaspoon each of mace and cinnamon and a quarter of a teaspoon of freshly grated nutmeg. Phew.
Once well-mixed, give it a little taste and add more seasoning and spices if you wish. 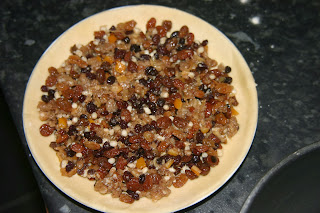 Next, roll out enough shortcrust pastry and line the plate with it. Scatter over the filling and cover with more pastry, sealing the edges with beaten egg or water. Trim the edges and crimp, before glazing with beaten egg in the usual way. 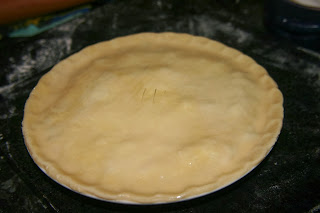 Bake at 200⁰C for around 30 minutes.
Jane says that any remaining filling can be used to make small mince pies. I think I went one better however, and made sweet lamb Eccles cakes, which were such a success they ended up on my last Pop-Up Restaurant’s menu. 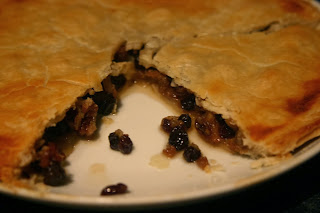 #388 Sweet Lamb Pie from Westmorland. I spotted this pie quite early, thinking it must be awful. Today I feel Jane Grigson has taught me well and I now knew this would be good. When you bite into it, you get the taste and aroma of lamb – so you know it is there – but the fruit and spice compliment it very well. There is no added sugar and the apples are still tart, so it is not sickly like a Christmas mince pie. Is it sweet? Is it savoury? It does not matter; these sorts of recipes are the crowning glory of English Food. Really lovely, go and make one. 8/10.
Posted by Neil Buttery at 8:01 PM 4 comments: