For a recent pop-up restaurant menu, I foolishly decided that one course should be soufflé. Now I must admit, I have had little trouble with Jane’s savoury soufflé recipes, but they were large soufflés with plenty of structure. What I wanted was little individuals ones which required even baking in my overworked and increasingly erratic oven. Luckily Jane had it covered – or so I thought – with this recipe for Little Cheese Soufflés.

This recipe appears to be far too good to be true; there is no béchamel sauce, no whipping of egg whites, no gentle folding and no ban Marie. All one has to do is mix the ingredients in the right order and bake! Obviously this was the one.

This mixture makes enough for 8 ramekins:

Grate 8 ounces of Lancashire cheese, setting a couple of tablespoons aside for later. Whisk together well 4 large eggs, and mix in ¼ pint each of single and double cream along with the cheese. Season with salt and both black and Cayenne peppers. Jane has a secret ingredient too; a rasp or two of freshly grated nutmeg.

Butter your ramekins and split the mixture between them, making sure there is a half-inch gap between mixture and ramekin rim. Mix together the cheese you put aside with two tablespoons of breadcrumbs and adorn each pot with the mixture. 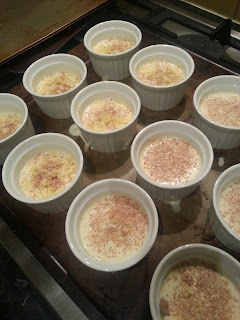 Place on a baking tray and bake for 20-25 minutes at 200⁰C until risen and browned.

Griggers’ serving suggestion: ‘Serve immediately with thin slices of bread baked in the oven until crisp.

#408 Little Cheese Soufflés. Well what can I say? When Jane says ‘serve immediately’ she really does mean immediately! It took approximately 10 seconds for my risen soufflés to become sunken shells merely coating the inside of my ramekins. In her defence, these soufflé shells did taste good, though they certainly would not do for my pop up. As far as my understanding is, it seems that the mixture only rose because the eggs – technically – overbaked and therefore formed large bubbles. It seems the recipe was too good to be true after all. Hey ho. 3/10. 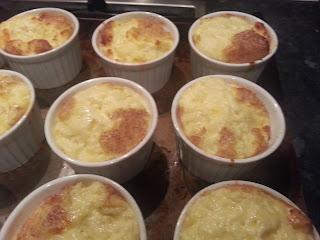 Here they are straight out of the oven. 10 seconds later, they weren't so appetising!

P.S. For the pop-up I simply used her basic soufflé recipe and added my own flavourings. They rose and stayed up, so Jane saved the day in the end.
Posted by Neil Buttery at 10:29 PM No comments: 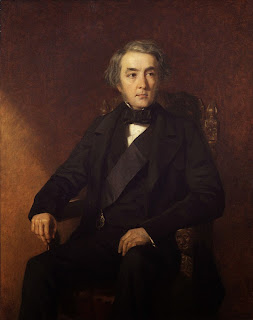 The first Earl of Sefton

This recipe comes from the distinguished French Cook Louis Eustache Ude, chef to the Earl of Sefton. He came from good cooking stock himself; his father was chef to King Louis XVI.


Ude was quite a character, there’s a great story of him being hauled in front of a magistrate after he was found selling roast grouse on his menu before the 12th of August (the date from which the gamed season begins. See here for a post all about that). He was given a fine and sent on his way.


The next day, the Scottish Laird who had reported Ude to the police returned to Ude’s restaurant to make sure he was abiding by the rules. Pleased to see there wasn’t a morsel of the offending bird on the menu, he ordered Salami de fruit défendu, i.e. Salmi of Forbidden Fruit, which turned out – of course – to be grouse! The cheeky devil. 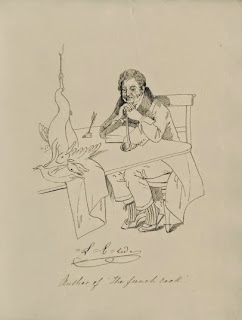 There was none of this nonsense when he worked for the Earl of Sefton though as they goton like a house on fire, except for one day when he left his service because Ude spotted the Earl’s son adding salt to some soup he made. Offended by this, he turned on his heel and left.


This recipe is essentially a savoury custard. It could only work with a home-made stock though. I imagine it would be excellent nourishing food for someone that is ill. The little custards can be served in their ramekins or turned out onto a plate.


Jane suggests to use a veal stock, but any stock can be used. On the other blog I recently wrote up a recipe for such a stock. For these sorts of dishes where the stock is the star of the show, you need to make your own stock, otherwise you risk it tasting of Cuppa Soup.


Anyway, that’s enough waffle. On with the recipe!


Bring one pint of good, clear, home-made stock to a boil and whisk it into 6 beaten eggs just as you would with a regular custard. Add the grated zest of a lemon, ¼ tsp of ground mace and season with salt and Cayenne pepper, then and whisk in 4 tbs of clarified butter. 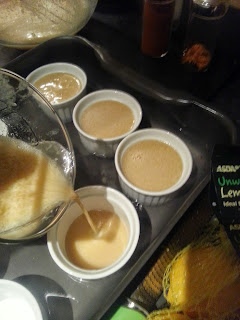 Place your ramekins – you’ll need 6 to 8, depending on size – in a deep roasting tin and pour the custard into them and cover with foil. Pour boiling water into the tin, technically turning it into a ban Marie, and carefully slide the tin into an oven already preheated to 180⁰C and bake for 12 to 20 minutes, or until the custards are just set and still have a good wobble on them. Serve straight away with thin, crisp toast, says Good Lady Grigson.


#407 Seftons. These were great, light and satisfying, even though they sound a little odd. I’m thinking that should I ever get my premises, they will definitely go on the menu; they are delicious, light, subtle and very satisfying and could very easily made vegetarian. I imagine a good mushroom stock would work very well as an alternative to veal. 8/10 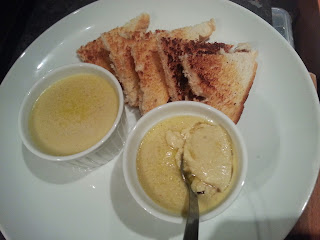 Posted by Neil Buttery at 2:27 PM No comments:

Neil Cooks Grigson is on the radio!

Hello there everyone, just a very quick post to let you know that Yours Truly will be on Radio 4’s legendary Food Programme.


A 2-part tribute to Jane Grigson has been recorded in front of a live audience down in Bristol. Sheila Dillon hosts and on the panel are Diana Henry, Shaun Hill and Geraldine Holt. I was invited down to take part in it because Jane Grigson has changed my life, so I get to chat with them about how the blog has led me from PhD student, to starting my own food business.

It’s a two-parter and the first episode goes out today at 12.20, and the second episode is broadcast tomorrow at 3.30.

All very exciting and I am so glad that producers Rich Ward and Dan Saladino contacted me about it.

Posted by Neil Buttery at 11:53 AM No comments: