Is there anyone who doesn't like a pie made with hot-water pastry? Everyone, I say, from the Mayor of Melton Mowbray to, er, Sweeney Todd. Oh, except for vegetarians. They’re so quintessentially English and I’ve not seen anything remotely close here in Texas. I must admit I’ve been putting off making these pies – I’d never made one before and I knew that it would take a lot of time, and presumably, effort. However, I felt I was ready – and so I should be because there are several to do in this book so I need the practice. Hopefully I’ll get it right first time.
So, for those of you not in the know, a raised pie is a pie made from pastry using boiling water and lard, unlike shortcrust pastry that is kept as cold as possible. Hot water pastry achieves a putty-like consistency that allows the pie mould or tin to be moulded and raised up the sides of the tin, rather than rolled. The hot water makes the pastry very absorbent too; you need this as the filling cooks and releases juices. Normal pastry that contains butter would just turn into a sloppy mess. Raised pies became crazily over-the-top in the seventeenth and eighteenth centuries. Elizabeth Raffald’s receipt for a Yorkshire Goose Pie gives the following instructions:
‘Take a large fat goose, split it down the back and take all the bones out. Bone a turkey and two ducks the same way, season them very well with pepper and salt, with six woodcocks’
You don’t get pies like that in Yorkshire nowadays, I can tell you. Imagine the meat sweats you’d get from a slice of that!
The raised pie hasn’t quite fallen out of favour in Britain these days – I’m sure Melton Mowbray pork pies are as popular as ever, but that’s all you generally see now. The book proffers more, and I shall be adding them as I go. The basics are: Pork Pie; Veal, Ham and Egg Pie; Raised Mutton Pies; and Game, Chicken or Rabbit Pie. They all have the same basic parts: the pastry, the jellied stock and the filling itself.
It all seems a bit complicated, but it’s not really. In this post I’ll deal with the construction and baking of the pie. The jellied stock and the fillings can have their own posts (these are coming in the next day or two).
Begin by making the hot water pastry. Bring a third of a pint of water and six ounces of lard to the boil. In the meantime, weigh out a pound of flour and place in a bowl with half a teaspoon of salt. When boiling, tip the water and fat into the flour and mix quickly – electric beaters are the best for this, but don’t use a high speed as the pastry won’t bind properly. To enrich this pastry add an egg, or a tablespoon of icing sugar. Cover the dough and leave until it cools enough to handle, but don't let it cool down completely. Take three-quarters of the pastry and put it in a six or seven inch cake tin with removable base. You can buy fancy hinged raised pie moulds – they are quite expensive though, but they are beautiful (see this link). Quickly, but carefully, mould the pie by gently pushing the pastry up the sides of the mould or tin until it overlaps the lip, making sure there are no holes or tears. If it just flops down, then it is too hot. Wait five minutes and try again. 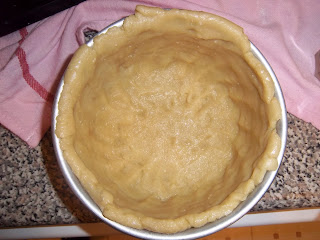 If you want to make small pies, you can mould the pastry around the outside of a wide rolling pin or a jam jar. This method is required for the mutton pies. This is alot trickier apparently. So unless you can avoid it, do the big pie.
Now you can start on the jellied stock and prepare your pie filling. Pack the filling well into the raised crust. 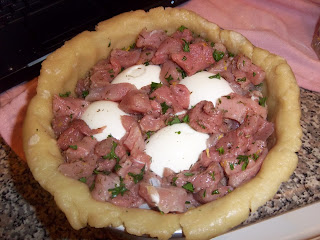 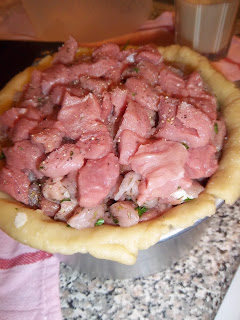 Roll out a lid with the remaining pastry and fix in place with a little beaten egg, making a hole in the centre for steam to escape. Decorate the pie with leaves and roses using pastry trimmings. It’s strange that savoury pies have the ornate decorations in England and that the sweet ones are left plain. I don’t know why this is. Anyway.... Brush the lid with more egg (don’t throw unused egg away, you’ll need it later). 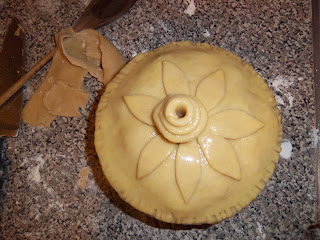 Bake in the oven for half an hour at 200°C (400°F) to colour the top, and then lower the temperature to 160°C (325°F) for two hours for large pies and just one hour for small pies – you need this time for the meat to cook and become tender. Watch the pie doesn’t brown too much though – if it needs a little protection, cover with some brown or wax paper. Remove it from the oven and leave it to cool for thirty minutes before removing it from its mould very carefully. Brush the sides with beaten egg and return it to the oven for a final half an hour to brown and crisp up. 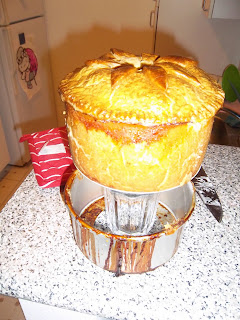 Whilst the pie cooked, the meat shrank, so the gaps need filling with the jelled stock. This can be carefully poured through the hole in the lid, or better using a small funnel. Let the pie cool and eat the next day. The pie will keep for days wrapped in wax paper and kept somewhere cool.
Phew!
#282 Raised Pies. It won’t write a review for this recipe – I’ll save that for the fillings. However, it is worth saying that although making a pie like this is no mean feat, it is worth having a go. I had such fun pottering about the kitchen making my first riased pie (the Veal, Ham and Egg Pie). But then, I am a great big geek. Anyway, hopefully I have inspired you to give it a go, if not at least appreciate how much effort goes into these beautiful and delicious artisan pies.
Posted by Neil Buttery at 2:51 AM

Cheers mnaj - you are eagle-eyed. Correction made!

this is awesome beyond belief. you give me courage to try pies i've been thinking about since i first read grigson's Good Things in 1977. wow!

give them a go. it's great fun - let me know how you get on!

Thank you for the pictures and descriptions. I was reading a book about World War II and trying to cook in England with all the rationing. I just wanted to know what a raised pie was, but now you have inspired me to try cooking one!

I'm glad you fancy having a go! It's an easy pastry to make so if you've not cooked much before, it'd be a great place to start.

I'm glad you fancy having a go! It's an easy pastry to make so if you've not cooked much before, it'd be a great place to start.