If you are going to attempt to make a raised pie, then you need to make a jellied stock. The jelly in these pies is either loved or hated. Many people can’t stomach the thought of savoury jelly I think and either have to pick it out or avoid eating these delicious pies altogether. The jellied stock is very important though. The meat inside is cooked for a long time and can dry out a little – some water escapes through the hole in the top and some is absorbed by the pastry. The stock soaks into the meat, making it nice and juicy again and it fills any gaps made by the shrinking contents.
So here’s the recipe. You could, of course, just use some stock and gelatine, but that would be cheating!
First you need some bones that will release alot of gelatine, so use either two pig’s trotters or a veal knuckle – ask the butcher to cut them into several pieces for you. To these, add any bones you may have left over when you prepared the fillings. You’ll also need a sliced large carrot, a medium onion studded with three cloves, a bouquet garni and twelve black peppercorns. Place all of these in a big stockpot. 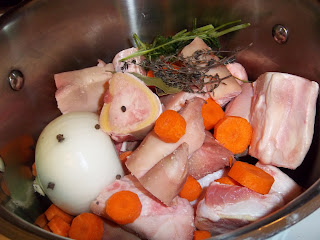 From this...﻿
Now add four to five pints of water, bring to the boil, skim off any scum and cover and simmer for three to four hours. 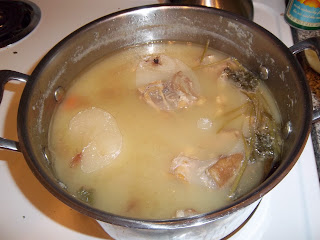 ...to this...
Strain the stock through some muslin into a clean pan and boil it down until it is a concentrated ¾ of a pint. Season it with some salt and more pepper if required. The stock is now ready to be funnelled or poured into the raised pie (see here for instructions). 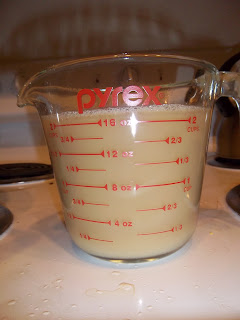 ...to this!﻿
#283 Jellied Stock. I won’t write a review for this as it’s not a dish in itself, but I will say that it was a very satisfying process; condensing that big set of ingredients into the viscous well-flavoured stock. Made me feel like a real baker.
Posted by Neil Buttery at 2:18 AM