It’s always nice to add an extra species of animal or plant to my list of foods I have eaten. Halibut is reasonably pricey so I have typically avoided them in the fishmonger’s shop. They are also beasts – the largest flatfish to be found in European waters. Check out this one caught off the west coast of Iceland in 2010: 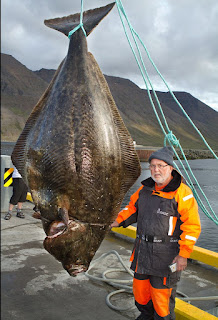 This recipe is from the Polish novelist Joseph Conrad’s wife. She was and Englishwoman called Jessie George, who obviously had a flair for cookery. She wrote a book called A Handbook of Cookery for a Small House, and I assume (for Grigson doesn’t say) that it is this volume from which the recipe comes.

The recipe includes an unusual ingredient – Patum Peperium, otherwise known as Gentleman’s Relish. It is a highly spiced potted anchovy spread, and was a Victorian invention – click here for a link to the other blog for more information on this delicious savory.

This will serve 3 or 4 people, depending upon the size of your piece of halibut, which should weigh between 1 and 1 ½ pounds. Try and get hold of a steak, if you can only get fillets buy two pieces and sit them on top of each other. Make the spiced butter by mashing together 4 ounces of softened butter and a very generous heaped teaspoon of Patum Peperium and smear it over the halibut, including the underside. Sprinkle over 6 tablespoons of white breadcrumbs and bake in the oven for 30 minutes at 190⁰C (375⁰F) until the breadcrumbs have browned.

In the meantime make the tomato sauce that accompanies the fish. Peel 8 ounces of tomatoes by cutting through the skins in a cross shape on their undersides. Place in a jug and pour over boiling water. After 1 or 2 minutes, remove the tomatoes and the skin should be easy to peel away. Chop the tomatoes and cook them in a saucepan with a good sized knob of butter. Gently cook until the juices are reduced to just 3 or 4 tablespoons. Season with a teaspoon of Worcester sauce and some salt, pepper and sugar.

Remove the fish from the oven and place on a serving dish, pour the buttery juices into the sauce and spoon it around the fish. Finally, add 6 split anchovy fillets and place on top of the fish in a criss-cross pattern. 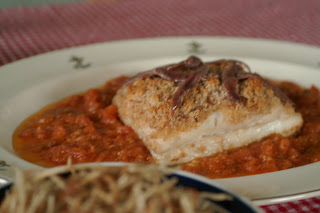 Jane suggests serving with matchstick potatoes. She does not let us know how to make them, but luckily I knew anyway: peel some potatoes and cut into 2 or 3 millimetre matchsticks – julienne as the French say – use a food processor or Chinese mandolin to do this (if you don’t have one, then don’t even bother and boil some potatoes in their skins instead). Plunge the potatoes into a roomy bowl of water so you can rinse away the start. Then drain them in a sieve.

Heat up some cooking oil such as sunflower or groundnut. When a piece of bread goes nice and brown in about 30 seconds, it is hot enough to add the potatoes in batches. Fry for 2 or 3 minutes until golden brown, around 180⁰C if you have an electric deep fat fryer or cooking thermometer, then drain on kitchen towels. Salt and serve.

#342 Halibut with Anchovies. What a delicious dish! The fish was firm, flaky and moist and the butter was seasoned with just the right amount of the Patum Peperium. The tomato sauce was rich yet fresh; a great meal for a summer’s evening. 8.5/10.

Posted by Neil Buttery at 1:59 AM No comments: Links to this post

I haven’t been on the ball with my blogging recently, I do apologise (though there are reasons for this that you shall soon be privy to). I shall get my arse into gear.


Here’s a recipe that I have meant to make every summer, and every summer I have forgot. I did not expect to be making it here in America as you don’t see fresh peas in their pods very often here; I happened upon them at Soulard Market which is great for fruit and veg.

This soup is “a soup for midsummer when young peas are at their freshest and sweetest”, says Jane. In fact that is all the she says on this one. This soup has very few ingredients and it contains no stock – and no seasonings – and can be served either hot or cold. It’s not very often that you come across vegetable soups being made without stock, though the great French chef and restaurateur Marcel Boulestin knew all about the benefits of making soup in this way:

The chief thing to remember is that all soups – unless otherwise specified – must be made with plain water. When made with the addition of stock they lose all character and cease to be what they were intended to be. The fresh pleasant taste is lost owing to the addition of meat stock, and the value of soup from an economical point of view is also lost.

Well we get to put this theory to the test in this, the penultimate recipe in the Soups chapter…

Start by shelling your peas – you’ll need to buy three pounds – and stop shelling when you get to about 1 ¼ pounds. Reserve five or six of the greenest pods. Next, chop six ounces of spring onions and sweat them in three ounces of butter, along with a very finely chopped clove of garlic. Cover the pan, and let them stew for five minutes; mind you don’t let them brown though. Add your peas and the reserved pods along with a little less than three (UK) pints of water. Bring to a boil, and then simmer until the peas are nice and tender. Liquidise and sieve the soup, reheat and stir in 6 fluid ounces of crème fraîche or whipping cream. If you want to eat the soup cold, you are essentially done – all you need to do is chill it and add a flurry of chopped mint leaves into each bowl when you serve them. If you want it hot, stir in three more ounces of butter. Again, serve with some finely chopped mint leaves. 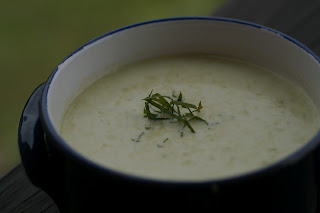 #341 June Pea Soup. Well, well, well, I have to say I was pleasantly surprised my this delicious soup – the sweet peas and the still very slightly acrid onions worked so well and did not require anything else to make them delicious, just the touch of aromatic mint and the silkiness from the cream. I tried it cold; there was none left to try warm! 7/10.

Posted by Neil Buttery at 4:17 AM No comments: Links to this post