Known as Teisen Sinamon in Welsh, this is a mysterious cake. Griggers doesn’t really give any history behind it in the book. She says that the recipe is by Mrs Bobby Freeman (who has written a book of Welsh cakes and buns). She also says that it’s bit of a pity that chefs don’t make traditional dishes enough in their restaurants anymore. I did find after a little research that is a Victorian recipe – thanks Victorian Recipes of Wales teatowel! I’m not actually sure if it is a cake – it’s more like a giant biscuit with some meringue on top. Quite American really.
I made this cake on request for my mate Chandra’s birthday the other day. I think it went down quite well at work.
Cream four ounces each of butter and sugar in a mixing bowl and then beat in two egg yolks (reserve the whites!). Sift eight ounces of plain flour, a rounded teaspoon of cinnamon and half a teaspoon of baking powder and mix them in stages into the creamed butter and sugar. Knead this mixture together and roll it out to line a nine inch flan tin with a removable base. Actually rolling it out is a total pain in the arse because it breaks up very easily. Instead spread it out over the base of the tin using your knuckles, pushing the dough up the edges and make it neat using the edge of a measuring cup. Bake for 20 minutes at 200°C (that’s 400°F). Remove from the tin and cool on a wire rack. Heat some apricot jam with a little water to make a glaze and paint it thinly over the cake. Remember those two egg whites? Add another one and whisk until the stiff-peak stage. Then add three tablespoons of caster sugar and whisk again until the meringue becomes silky and creamy. Pile into the centre of the cake and make decorative swirls and spikes. Bake again at 180°C (350°C) until the meringue is a nice golden brown – about 10 or 15 minutes. Take out and cool on the rack again. 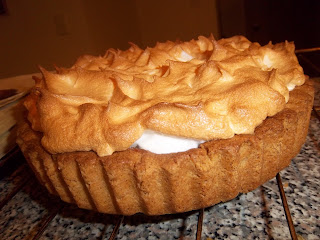 #280 Welsh Cinnamon Cake. Is it a cake? Is it a cookie? We just don’t know. It was very nice though – plenty of warm cinnamon spice. It was a bit stodgy too, but in a good way. I’m not sure about the meringue topping though. Not a bad one, by any means. 6.5/10.
Posted by Neil Buttery at 3:03 AM

I found it quite delicious. Very cinnamony and wonderful. Of course it was enhanced by being a birthday cake. I give it a 10.

Aw shucks. Cheers Chandra. I'm doing something to bring into lab meeting tomorrow... not sure if it'll go down as well...