Eliza Acton (1799-1859) was a cook and poet. She was the first person write a cook book for normal folk like you and I, all the previous ones were written for the housekeepers and kitchen staff that ran houses and stately homes. Eliza was also the first to include cooking times and ingredients lists in her recipes. Years later Mrs Beeton based her much more popular book on Acton's writings. Cheeky!


This recipe comes from her famous book Modern Cookery, for Modern Families published in 1860. Old that it is, its simplicity seems quite modern to me; there are very few ingredients, just sole, salt, cream, mace, Cayenne pepper and lemon juice, and it was designed to show off the excellent flavour of a delicate fish.


If you can’t get hold of sole, use any other flat or white fish like brill, turbot, cod, haddock, pollack etc., though they will need to be cooked for longer. 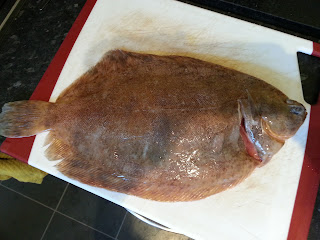 Ask the butcher to gut and scale a nice sole. At home, prepare it by trimming off the fins and place it in a close-fitting dish or pan. Pour around it boiling water that almost covers it, plus a teaspoon of salt, then let it simmer for just two minutes. Carefully pour away the water and pour in some cream so that it goes half way up the fish. Bring to a simmer and baste the fish with the hot cream until cooked through. This takes only four or five minutes, but if the cream thickens too much, let it down with some of the cooking liquid or some water. 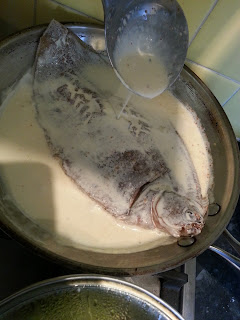 Remove the sole to a serving dish and finish the cream sauce by adding some salt and a little ground mace and Cayenne pepper. Lift the sauce with a squeeze of lemon juice – a little under half a lemon did for me.


Pour the sauce over the fish and serve with boiled potatoes and some blanched and buttered cucumber dice, says Jane, though I expect it would work very well with a green salad or some quickly-steamed asparagus spears. 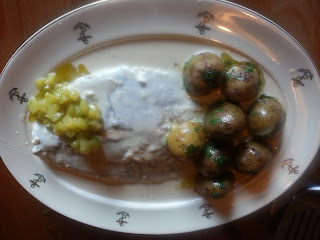 #376 Eliza Acton’s Sole Stewed in Cream. I loved this. The fish was lovely and moist and it flaked away from the bone very easily. The sauce was not as rich as you might expect, and its mild creaminess complemented the fish very well. There was also the added bonus of finding a large and handsome roe within the sole which also ate very well. Very good and very simple 8/10 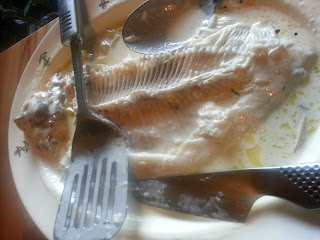 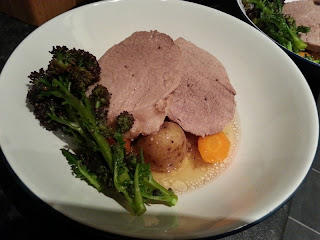 Here’s a nice simple recipe that really shows off simple English cooking at its best. When I first started cooking boiled meats for the blog, it was always a disaster because the meat was tough and all of its flavour seemed to just dissipate away. It is for these very shortfallings that English food is viewed as bland and boiled to death. Here a joint of beef is ‘boiled’ with plenty of stock veg and spices, but really ‘boiled’ is the wrong word to use entirely because it’s poached rather than boiled. The most you want the water to be doing is giving off the odd tiny bubble and gurgle, a temperature of about 80⁰C. As soon as I realised this error, boiled meats have been coming out tender and delicately-flavoured, so I was looking forward to this nice, light recipe that seemed perfect for early spring.


It’s worth giving a few more pointers for perfect boiled meats: First, use a closely-fitting pot so that the vegetables can lend maximum flavour and so the meat juices don’t become too dilute. Second, use the best ingredients you can afford because it makes a world of difference to the finished dish. Try and get meat that has been hung properly by a real butcher, that pink nonsense you buy in the supermarket will simply not do. Lastly, season, season, season! Simple cooking like this depends on a good seasoning of salt and black pepper.


Although this recipe uses a piece of fresh meat, it is really a footnote to #161 Boiled Salt Beef & Dumplings and so appears in the Cured Meats part of the Meat, Poultry & Game chapter and not the Beef & Veal section.


Once you have your silverside of beef, you need to calculate the cooking time which I described in #150 How to Cure Meat in Brine. 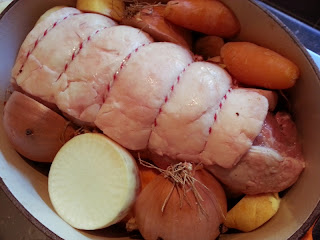 Put the beef into its close-fitting pot along with the vegetables and spices from #161 Boiled Salt Beef & Dumplings, which were: 2 large unpeeled onions studded with 8 cloves, 2 blades of mace, a small bit of nutmeg and plenty of black pepper. However, seeing as this meat is fresh meat and not strongly-flavoured cured meat, it will need a bit of a helping hand, so add also a parsnip, a carrot and a piece of turnip gives some extra flavour. Cover with water, bring slowly to a gurgle and simmer gently until cooked. 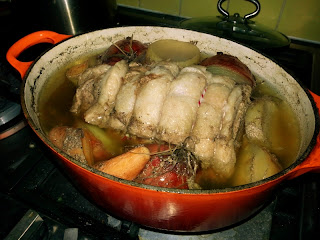 When ready, carve slices and serve with boiled potatoes, carrots and horseradish sauce. Although Jane doesn’t say it, I also added a couple of ladlefuls of the cooking broth to produce a meal not unlike #98 Cawl [which appears to have not been proof-read before posting]. 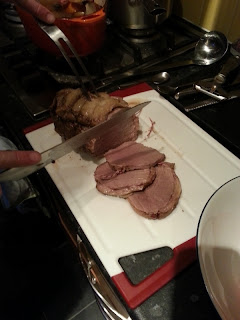 #375 Boiled Silverside of Beef. I knew Griggers wouldn’t let me down on this one! It was beautifully and subtly flavoured with the sweet vegetables and meat itself was so tender. It really makes a great alternative to a roast on a summery Sunday. I reheated the next day and the broth was even better flavoured. Any broth left over makes ‘beautiful soup, says Lady Jane. 8/10
Posted by Neil Buttery at 10:16 PM No comments: