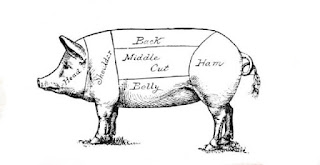 Pigs and pork were – and still are – fundamental to life in Britain, Europe and many other places around the world. So easy they are to look after, and so unchoosy they are in what they eat, that most households kept a pig of their own for food. The family pig would be fed kitchen and table scraps and garden waste, quickly fattening ready for slaughter in early winter.


So dependent were people upon pork, that when folk moved into the cities, they brought with them their pigs to rear. There wasn’t enough space for absolutely everyone to keep a pig, many simply had to get their fix of pork from one of the many city piggeries. 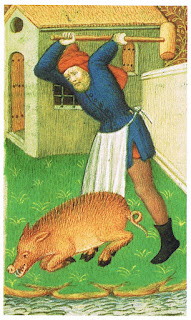 Mediaeval pig slaugher
Pigs were often let out of their pens to have a good old rummage around the vicinity of the household, gobbling up scraps of food and other garbage; very useful in a time when waste wasn’t collected up and taken away like it is today. Inevitably, pigs escaped, and they could be seen on the city streets eating anything and everything they came across. It became a huge problem – they didn’t just eat rotting food, but also human excrement from gutters, as well as the blood and pus collected in barber-surgeons’ buckets. They became feral and ferocious, with reports of errant hogs eating babies! London’s Shepherd’s Bush was particularly overrun.

Saint Anthony
This problem was compounded by the fact that in many cities, pigs came under the protection of St Anthony, Patron Saint of pigs and swineherds. If you were unlucky enough to live in a city where Antonine monks also dwelled, it must have felt it was the pigs’ city not yours. In many households, the runt of the family pig’s litter was named St Anthony’s pig.
It didn’t take people long to realise that if pigs were eating diseased and rotten matter, then the pork from the pigs that we ate in turn would be very poor. Indeed, pork was teeming with parasites such as tapeworm and trichinosis. Parasites love pigs, it seems, and even with our modern hyper-strict food regulations, we have only recently been able to sell pork that can be cooked a little underdone safely.
When Jane wrote English Food in the 1970s, she complained bitterly of the state of pork products in the UK; sludgy sausages made from mechanically-retrieved meat and inert rusk, and grey pork pies were (and still are) standard fayre. However, these foods can be some of the most delicious produce in Britain, and when made properly, we excel. Luckily there are small-scale local butchers everywhere who make their own sausages and pork pies to a high standard, we just have to root them out like any self-respecting hog would. 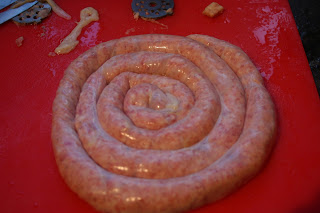 Making Cumblerland Sausage
Although as a nation we consume a lot of pork, there are just eight recipes in the Pork section of the Meat, Poultry and Game chapter of the book, but this is not because Jane was shirking her responsibilities but because most of the pork we consume is in pie form is cured in some way, therefore most porcine recipes appear in other sections of the book. The mean score for the section is an impressive 8.1 – the second highest score so far – her recipe for #415 Cumberland Sausage is sublime and scored full marks from me, and she introduced me to the delights of #373 Faggots and #336 Brawn. 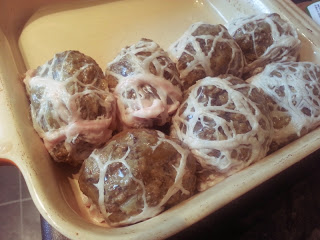 Wrapping faggots in pig's caul
Jane managed to cover quite a lot of ground in just eight recipes, but it did mean that a few were missed out. If the book were to be reprinted, I’d like to see a few more cuts represented; pork belly, hand of pork, cheeks, chitterlings and pigs’ ears don’t get the look-in they deserve. What’s more, there are no recipes for sausage casserole, pork in cider, pulled pork (a British, not a U.S., invention!), Scotch eggs, pork scratchings, hog’s pudding or a good quality country pâté such as a nice pâté de campagne. 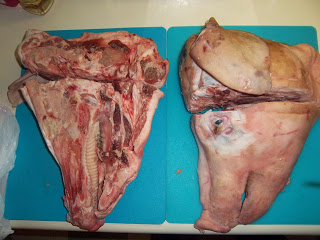 The gruesome initial step of brawn-making
As mentioned already, this section is a very high scorer with a mean score of 8.1 (and a median and mode of 7.5 and 7 respectively). There were no disasters, the lowest score being a 7, with classics such as #415 Cumberland Sausage (which scored full points), #290 Roast Pork with Crackling and #82 Toad-in-the-Hole driving up the final mark.
As usual I have listed the recipes ordered as they appear in the book, along with the scores I gave them and hyperlinks to the original posts.