The blog has been a little quiet of late because of a combination of business and broken car. This means that I’ve not been able to explore St Louis’s butcher’s shops, markets et cetera anywhere near as much as I’d hoped this month. However, there are still a few simp recipes to do in the book and this is one of them. I had hoped to not do any recipes from the Teatime chapter of the book because I have done so many and there are so many under-represented chapters. However, beggars cannot be choosers, so I made these walnut biscuits that are very similar to the sugar thins I made ages ago. Don’t feel guity about eating a load of these either; walnuts have more antioxidants than any other nut. You might end up a fat little piggy, but you’ll have none of those pesky free radicals aging the skin of your three chins.

Start off by creaming together seven ounces of softened butter with five ounces of caster sugar. Next, beat in a large egg and then eight ounces of self-raising flour and three ounces of chopped walnuts. 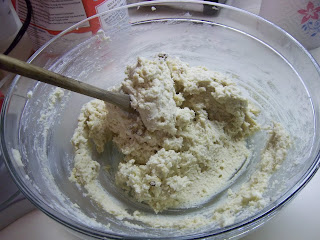 Spoon a third of the mixture onto a rolled out piece of cling film and roll it up tightly to form a sausage shape that is about 2 inches in diameter. 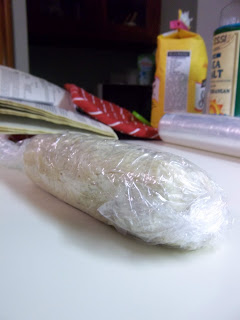 Repeat with the rest of the mixture. Put the sausages of dough in the fridge to harden up over-night. You can freeze them like this too. 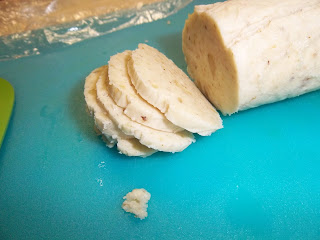 Next day, peel away the cling film and slice up the dough thinly and place on baking sheets. Bake for no more than ten minutes 190°C (375°F). 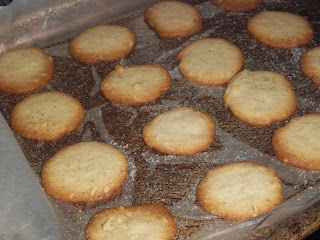 Griggers reckon they go well with coffee, and I am sure they do, but as I am not allowed to drink coffee anymore (Doc’s orders), it’ll have to be a tea.

#308 Walnut Biscuits. A nice, crisp biscuit that is sweet and crumbly; it certainly would go with unsweetened coffee or tea. The only problem with them is that there weren’t enough walnuts. I would go to four or maybe five ounces of walnuts. 7/10
Posted by Neil Buttery at 2:27 AM No comments:

Nobody really eats dulse, or any other seaweed, in England these days, though they used to. It is a pity because I do like the stuff. It seems to be popular still in Ireland though; my friend Evelyn often brings back a bag of it whenever she visits home and I like to steal a few pieces.


Dulse had been eaten for over one thousand years in North-Western Europe, the ancient Celtic Warriors of old ate dulse as they were marching and during the seventeenth century, and British sailors used it to prevent scurvy (although it was actually originally used as an alternative to chewing tobacco).
Its popularity in Ireland as well as Scotland led to dulse becoming liked in the USA too when they immigrated over the pond, although none of my American friends seem to have heard of it. 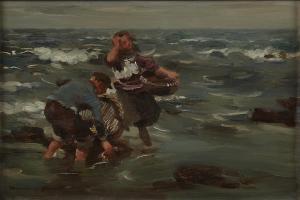 The Dulse Gatherers by Willaim Marshall Brown, 1863-1936
The dulse industry has obviously died a bit of a death in England and the rest of the UK and Ireland compared to days of yore. Charles Dickens, writing in 1858, reminisces about childhood holidays in Aberdeen where there were often over a dozen ‘dulse-wives’ selling dulse:


[O]f all the figures on the Castlegate, none where more picturesque than the dulse-wives. They sat in a row on little wooden stools, with their wicker creels placed before them on the granite paving stones. Dressed in clean white mutches, or caps, with silk-hankerchiefs spread over their breasts, and blue stuff wrappers and petticoats, the ruddy and sonsie dulse-women looked the types of health and strength... Many a time, where my whole weekly income was a halfpenny, a Friday’s bawbee, I have expended it on dulse, in preference to apples, pears, blackberries, cranberries, strawberries, wild peas and sugar-sticks.
He recalls a conversation:
A young one would say: “Come to me, bonnie laddie, and I’ll gie ye mair for yer bawbee than any o’ them.”
An old one would say: “Come to me, bonnie laddie, and I’ll tell what like yer wife will be.”
“Yer dinner ken yerself.”
“Hoot aye – I ken brawly: she’ll hae a head and feet, an mou’, and eyen, and may be a nose, and will be as auld as me, if she lives as lang.”
“Aye: but ye gie me very little dulse for my bawbee.”
“Aye,” replies the honest woman, adding another handful, “but sic a wife is weel worth mair siller.”
The dulse-wives exploded into laughter, when the woman suggested some one like herself, as the ideal wife which youth is doomed always to pursue and never to attain.
Oh! those dulse-wives.
Anyway, enough prattle, time for the recipe:
It could be easier, really. First, scrub and then boil some potatoes in their skins without adding any salt. Remove the skins and mash them. Next, crumble the dried dulse and fry it in olive oil – you’ll need a quarter of an ounce of dulse for every pound of potatoes used. This takes just a few seconds. Add the oil and dulse to the spuds and mix, mashing in some extra olive oil if need be.
Serve with lamb (as I did), beef, chicken or fish. 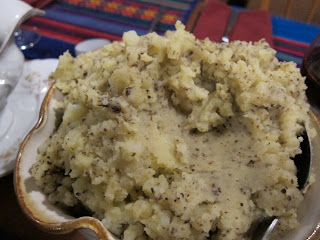 #307 Mashed Potato with Dulse. Well this was good mash, but there wasn’t much flavour of dulse in there. It did give the potatoes an attractive green colour though. I thought it strange that the recipe asked for olive oil rather than butter – olive oil was not used that much when English Food was first written in 1974. It would have been most likely found in chemist’s shops, where it was used to remove ear wax. 5/10
Posted by Neil Buttery at 4:07 AM 2 comments:

Ah, mint sauce. I love mint sauce, but have never actually made it myself. Mint sauce is, of course, the sauce to go with roast lamb, especially during the summer months. Though, I remember as a child when I used to go swimming with my Dad on a Sunday to Morley Swimming Baths, I always had a chip butty smothered in mint sauce straight afterwards.

The piquant sauce goes so well with fatty or rich foods. St Hildegarde, a German spiritualist nun of the early Middle Ages, said this of mint: “Like salt, when used sparingly, it tempers foods…[M]int, added to meat, fish or any other food, gives it a better taste and is a good condiment; it warms the stomach and ensures good digestion.”


I reckon that this is true, and by adding somesweetness and mild vinegar, you can get away with using it more than sparingly. 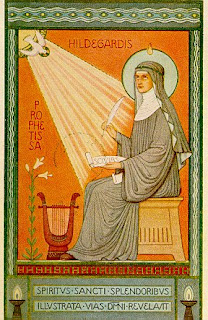 St Hildegard (1098-1179) depicted having a nice sit down
Griggers emphasizes that this sauce must be made with freshly boiled water and wine vinegar, not malt as it is far too harsh. We always used malt vinegar in our house when ‘diluting’ the thick sauce that came out of a jar. Let’s see how the proper stuff tastes like…
Chop up enough mint leaves to fill a measuring jug to the quarter-litre mark. Add three tablespoons of boiling water, stir and let the mint infuse into the water. When it is just warm, stir in three level teaspoons of sugar and four tablespoons of wine vinegar (any kind, though I went with red, as that’s all there was!). Stir to dissolve the sugar and add more sugar of vinegar if you like. I found the amounts given to be right on the button, myself. 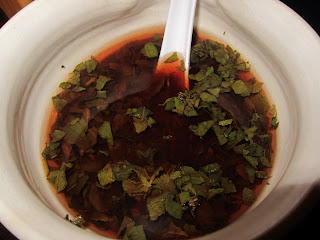 #306 Mint Sauce. Excellent, excellent excellent! Sweet, sour and wonderfully aromatic. I am never, ever going to buy mint sauce again. Go and make some. 10/10
Posted by Neil Buttery at 2:44 AM No comments:

For the meaty part of the dinner party I mentioned a couple of posts ago, I thought I would attempt a Guard of Honour. For those of you not in the know, a Guard of Honour is an attractive way of presenting roast rack of lamb by taking two racks and sitting them upon a roasting tray so the rib bones ‘bristle like a military row of crossed stakes’. The Guard can then be stuffed if you like. Jane likes, as this recipe includes the herb stuffing that I have made a few times now.

I did a little research on this dish, assuming it would be a very old one, but was surprised to find that I could only find relatively contemporary recipes, with none cropping up even in the nineteenth century. Odd.

Griggers recommends buying a whole best end of neck of lamb and to ask the butcher to split it in two down the backbone and to get it chined between each rib so that you can carve the joint easily later. To chine is to cut the backbone. If this wasn’t done, you’d have some thick bits of bone to wrestle with. Ask him to leave on the long bones of the ribs. This part is a rather difficult thing to achieve in America for a couple of reasons. First, the joint called a best end of neck means nothing and second, lamb is generally imported from New Zealand and pre-butchered, at least in part. It’s quite easy though to get hold of a couple of matching racks and to simply not have the extra-long bones.

To make a Guard of Honour, take your two racks of lamb and scrape the skin and fat from the very thin part of the chops to expose the bones, then score the fat on the chops and rub in salt, pepper and rosemary or thyme into it (I went with thyme). Stand the joints up and allow the ribs to cross over each other. Fix them in place with skewers. The cavity within can then be filled with herb stuffing. I found the easiest way to do this was to turn the joint upside down, opening it up, so that the most stuffing possible could be added. (Thanks for taking the photos, Joan!) 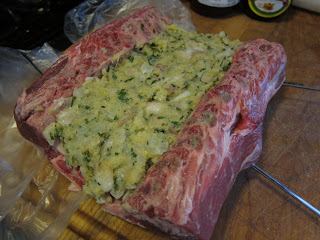 Turn it the right way up and press the sides together gently, scraping away any escaped bit of stuffing. Check the security of your skewers and place on a roasting tin. 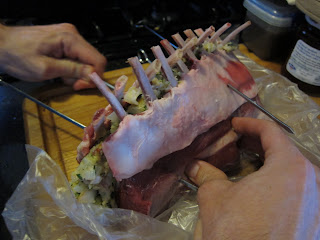 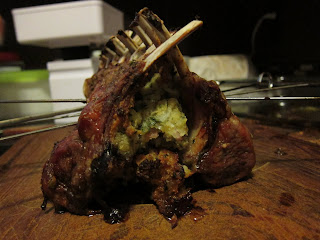 The meat can be carved, after a period of resting, nice and neatly, giving two chops per person. 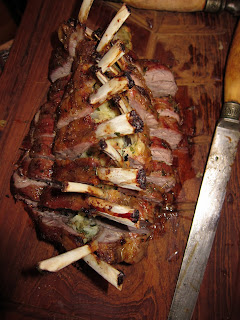 Serve your roast lamb with any of the trimmings Jane suggests here. She does mention that the stuffed tomatoes recipe goes very well with Guard of Honour, but I wanted to do other things... 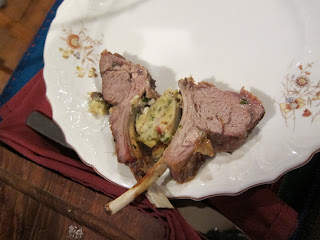 #305 Guard of Honour. I really liked this. I did make it because I was in the mood for lamb. Usually I like my lamb pink, but the delicious herb stuffing helped to keep the well-done meat moist and flavourful. I must admit it wasn’t quite as impressive as it should have been because I couldn’t give the precise instructions to the butcher in the preparation of the joint. I think I shall do some of the more tricky lamb recipes back in Blighty. This is only a little complaint of course and the recipe was very good indeed. 8.5/10

Posted by Neil Buttery at 2:53 AM No comments:

Griggers advises us on what to eat with roast lamb....

The next recipe from English Food will be roast lamb. Not as popular as it was as a roast meat these days, but easy to come by. Jane Grigson in her wisdom gives us a list: 'Things to go with Roast Lamb'. I thought I'd give the list in full. Hopefully as I cook through the Lamb & Mutton section of the Meat, Poultry & Game chapter, I'll try them all. Some I'll have to as they are also offical recipes, others I have inadvertantly tried as parts of other dishes and such. Anyways, here's the list: 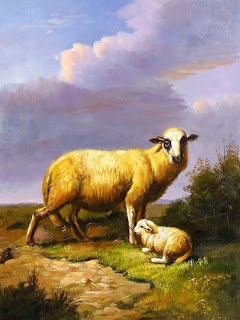 Mutton and lamb in oil-on-canvas form
Posted by Neil Buttery at 3:06 AM 6 comments: