The summer fruit season is pretty much done and dusted now, with just autumn raspberries and wild blackberries hanging around, but back in June at the very beginning of the season, I made these little gooseberry ‘tarts’. I’m using ‘inverted commas’ there because they are not tarts, they are pies.
In their simplest form, Oldbury fruit tarts are  hand-raised pies made from a hot-water pastry, filled with fruit and sugar and then baked. The pies, according to two of Jane’s correspondents, had links with Oldbury in Gloucestershire, and would be made by families as soon as soft fruits began to appear. In the latter half of the 19th century (and I’m sure much earlier than that too) the pies were ‘sold at fairs at a penny each’.
Below is the recipe and my review of the tarts, but it’s worth pointing out that sometimes these Oldbury pies would be made just like normal raised pies, but instead for being filled with jellied stock as you would  a pork pie, it is filled with fruit jelly preserve instead. This sounds so delicious and I may have a go at these more complex ones. I like the idea of a slice of fruit pie with jelly and some good cheese (Gloucester, of course) to round off a meal.
The hot water pastry for these pies is different to Jane’s recipe for her savoury (#282) Raised Pies in that there is both lard and butter here but no egg or icing sugar (which give crispness and an appetising brown colour to the cooked pastry). However, the method is essentially the same:
First cube 4 ounces each of butter and lard and pour over them 5 tablespoons of boiling water. Stir around until the fats have melted.  Put a pound of plain flour in a bowl, make a well in the centre and tip in the warm liquid mixture. Using a wooden spoon, and then your hands, form a dough. 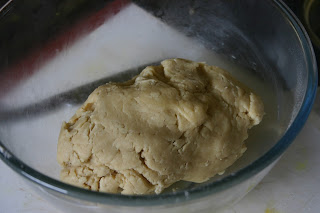 At this point, I kneaded the dough until smooth – Jane says it should have ‘a waxy look’ – then popped it back in the bowl, covered it with cling film and left it to rest for a bit until it felt like it could be rolled and moulded successfully.
I found that the dough made six tarts using Jane’s method of thinly rolling out batches into circles and, then using a saucer as a template to cut out perfect shapes. I kept the trimmings for the lids.
Here’s the tricky bit: now mould the edges of each pastry circle to a height of about an inch so that they form cases – or in old English coffyns. This was a bit of a nightmare; you need a good cool stiff dough to do this, and if possible, three hands. 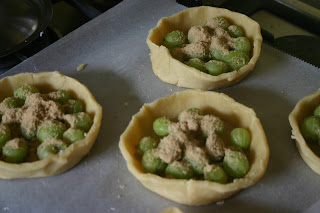 Now you can tumble in your topped and tailed gooseberries (about 8 ounces altogether) and a good amount of Demerara sugar (at least an ounce per tart, I’d say, but use your discretion). Roll out the lids, make a hole in the centre, and glue them in place with a brush and water, making sure you crimp the edges. Now leave the pastry to harden, this is a matter of a couple of hours in the fridge, but if leaving them in a cool larder, it’ll require an overnight wait. 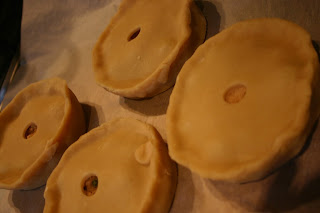 Bake the ‘tarts’ for around 25-30 minutes at 200⁰C. Because of a lack of either egg , icing sugar or glaze, the pastry doesn’t turn a nice golden brown, but if the filling is happily bubbling away within, you can be pretty sure they are ready. 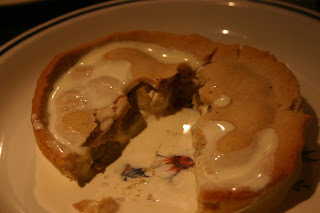 I served them warm with some pouring cream.
#414 Oldbury Gooseberry Tarts. Well these were not really worth the effort as the pastry was pretty disappointing in both taste and texture. Gooseberries in any form are good of course, so I did eat them. I’m looking forward to trying to make a larger pie filled with fruit jelly – that has to be delicious. 4/10.
Posted by Neil Buttery at 9:41 PM No comments: