Pease pudding is one of the oldest dishes, and most popular, in English history. The main ingredient in pease pudding is of course peas. The pea is one of our oldest cultivated crops mainly because it thrives in temperate climates and is quick to grow, and therefore, to select. Its easy-to-grow nature meant that it was good food for the poor where the poor were often forced to eat ground and dried peasemeal formed into loaves and baked like bread.


The etymology of the words pease and peas is interesting: the word originates from the Greek word pison, which became pisum in Latin, crops up in Old English as pise and then changes its spelling to pease. Oddly, the word pease was mistaken as a pleural and was therefore shortened to pea.


Pease pudding made up of dried, cooked and puréed peas enriched and flavoured with things like butter, eggs or onions. It used to be boiled in a well-floured pudding cloth, giving it the classic cannonball shape; and it wasn’t boiled simply in water alone, but with a piece of salt pork, ham or bacon, with which it would be served. It later would be boiled or steamed in a pudding basin, which is much more convenient, though I am sure the original way of cooking it in the ham stock would have produced a much more delicious meal. I love this pamphlet showing just how versatile pease pudding can be - pease pudding vol-au-vent anybody? 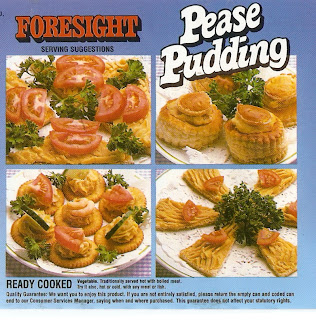 Before pease pudding there was pease pottage, which was essentially a thick soup made from pease and water, flavoured with scraps of meat and vegetables.


So, pease pudding was popular because it was cheap and plentiful. It was often made at the beginning of the week and eaten over the successive days, hence the old rhyme:


Jane suggests frying it up another day.


To make pease pudding, you first of all need to simmer a pound of dried green peas – whole or split, it doesn’t really matter – in enough water to just cover them until soft and tender. The times here can vary greatly – about 45 minutes to an hour for split peas, at least 2 hours for whole peas. It also worth mentioning that the age of the peas will affect the cooking time – old peas may need soaking overnight in water with a teaspoon of bicarbonate of soda. If you do soak them overnight, drain away the liquid they were soaked in before cooking in fresh water. 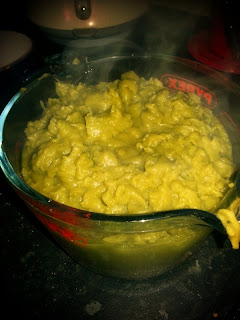 When the peas are tender, drain away any liquid and then pass them through a mouli-legumes or sieve and stir 2 ounces of butter and one beaten egg into the resulting purée. Season well with salt and pepper and spoon the lot into a generously buttered 2 pint pudding basin. Pop the lid on, or make a lid from buttered foil or cloth tied with string. Steam for an hour, then turn it out if you like, and serve with boiled bacon or salt pork or, as I did, with #373 Faggots and Peas. 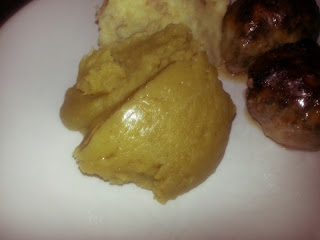 #374 Pease Pudding. This was a most successful dish – the pease were sweet and well-flavoured. Plus I managed to eat it over the space of several days just like the song! It was best when I fried slices of it in lard so that a good crust formed and ate it with some left-over faggots. I shall do this again. 7/10
Posted by Neil Buttery at 1:44 PM No comments:

In case you are worried here a faggot is in fact a pork meatball and not a homosexual. The word faggot actually comes from the old Norman fagot, which was a bundle of sticks tied up with string. Coal also came in faggots. Here, the pork meat is bundled in a piece of caul fat which also acts as a permanent basting.


It’s worth mentioning that the derogatory meaning of faggot has not fully infiltrated the United Kingdom from the USA; whenever my Dad called me a ‘bad-tempered faggot-face’ when I was being a wingey child (which was probably often), he wasn’t meaning I had the face of camp man. Or maybe he was…


I didn’t think faggots are that popular these days, but on a recent trip to Swansea, I noticed that every single butcher in the market sold them. They are also still very popular in the black country. It is still possible to buy Mr Brain’s faggots in onion gravy in supermarkets, but they apparently bear little resemblance to proper faggots; though I have to say, I had never eaten or cooked them before.


Faggots were invented as a way of using up all the offcuts and offal from butchers’ pig carcasses, they contain some breadcrumbs to both absorb some of the fat and to ‘cut’ the strong offal flavours. They have been dubbed Britain’s first take-away fast food by some, because faggots were sold at the end of the day for hungry workers to pick up on their way home after a hard day’s graft.


Two things that might put you off making/eating faggots are the offal and the caul fat, but don’t let it; offal cuts are very delicious. The strange lacy caul fat looks a bit strange at first, but it crisps up nicely on top as the faggots brown in the oven. It’s not hard to get caul fat; your local butcher should have some, and it should be very cheap or even free, though you may need to give them a bit of notice. Jane says that to get caul ‘you will need to go to a small family butcher, preferably an older man, who really understands meat’. To use it, just soak it in water so that it can unfurl and be much easier to handle. 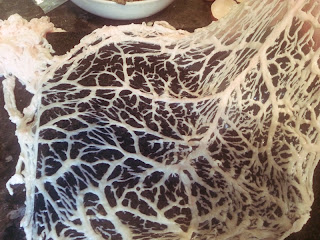 As you can tell by the title of this post, faggots are traditionally served with peas. Good Lady Grigson suggests #4 Green Peas in the summer and #295 Purée of Dried Peas with Green Peppercorns in the winter, but I wanted to serve it with a classic pease pudding (but you’ll have to wait for the next post for that recipe).


These faggots are made using pork belly and pig’s liver, but you can use any offal such as heart or kidney. Likewise, you could exchange the pork belly for another cut – just be careful to either use a fatty cut or add some streaky bacon to increase the fat content.


Here’s how to make this ‘good-tempered dish’:


Mince (or ask your butcher to mince) one pound of pig’s liver and 10 ounces of belly of pork and toss into a frying pan along with two chopped onions and a chopped clove of garlic and cook them gently for about half an hour. 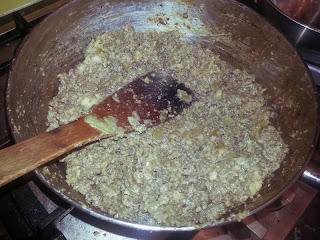 Try to not allow the meat or onions to take on any brown colour. Strain off the juices into a bowl and set them aside. Mix the meaty mixture with four chopped sage leaves (or a teaspoon of dried sage), half a teaspoon of ground mace, two medium eggs and enough breadcrumbs to make ‘a firm, easy-to-handle mixture’. I used four ounces. Have a taste of the mixture and season appropriately with salt and pepper.


Form the mixture into balls weighing two ounces apiece, then spread out the soaked caul fat and cut it into approximate five inch square pieces. Wrap each meatball in the pieces of caul fat and arrange them in a shallow baking dish. 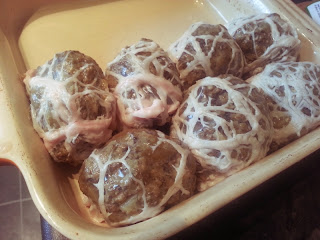 Pour in a quarter of a pint of pork, beef or veal stock and bake for 40 to 60 minutes. Twenty minutes or so before the end of the cooking time strain the cooking juices into the reserved liquor from earlier and stand the bowl in a larger bowl filled with ice cubes so that the fat quickly rises to the top and can be skimmed off. Return the liquid to the cooking faggots 5 minutes for the final five minutes of cooking. 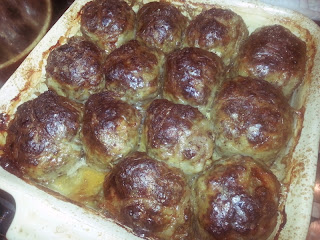 #373 Faggots and Peas. These were very good – the texture of the faggots were quite mealy due to the liver in there and the mace gave them a real taste of haggis. I would definitely give these a go again, but perhaps with some other offal cuts. 7.5/10
Posted by Neil Buttery at 9:32 PM No comments: