This is the third and final dessert on the theme of the classic pud pain perdu (for all three click this link). The others were recipes from 1420 and 1937, whereas this one is Jane Grigson’s adaptation of her grandmother’s way of using up left-over raspberry jam sandwiches. Here’s what she says on the subject:


Before the last war, when tea was an occasion for enjoyment and not for guilt, we often used to have home-made raspberry jam sandwiches at my grandmother’s house. There were always too many – raspberry jam being her favourite – and next day they would appear as a pudding, having been fried in butter. I always thought, and still do think, that their latter end was more glorious than their debut.


This is also the second and last of the recipes involving raspberries. I do wish Jane had written more as they are my favourite fruit and I had been looking forward to this one for quite a while: raspberries, cream and fried bread. What could there possibly be not to like about that?


This recipe serves four – but it can be increased or decreased as appropriate.


First of all you need to get your raspberries ready: place a pound of the delicious darlings in a bowl and sprinkle them with 4 ounces of icing sugar and ½ a teaspoon of ground cinnamon. Leave them to exude their juices; I left them overnight in the fridge. 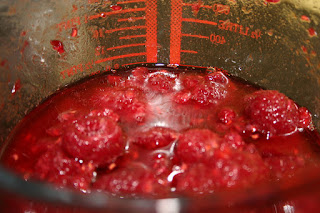 Whip up 6 ounces of whipping cream (or half-and-hald single and double cream) and a tablespoon of caster sugar. Next, cut 8 slices of white bread and cut off the crusts if you like and fry them in clarified butter. To make this, Jane suggests melting 6 ounces of butter in a small saucepan before passing it through a sieve into your frying pan. Fry the bread to a golden brown. 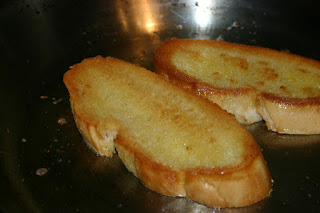 On a plate, place a slice of fried bread, then some raspberries with their juice, then a second slice of bread and finally a nice, healthy blob of cream. 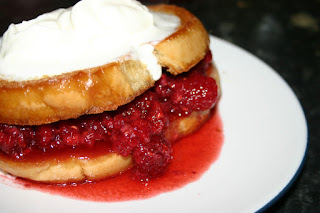 #381 Poor Knight’s Pudding with Raspberries. This was absolute heaven! The sweet-tart raspberries where made so delicious with their seasoning of cinnamon. Obviously with all that butter and cream it is not for dieters, but a portion does count as one of your five fruit and veg, so it’s not all bad. A perfect pud: 10/10.
Posted by Neil Buttery at 1:50 PM No comments:

This is the third of four different apple sauces in English Food. I have had to wait to cook this one as it requires a quince.


Quince are an ancient fruit, related to apples and pears, that is not seen around too much these days as they have fallen out of favour somewhat and also have a very short season. They have also suffered because of the terrible wet weather we’ve had this year.


Apple sauce should not be reserved just for roast pork, by the way, use it with sausages, black pudding, chicken, turkey, goose or game. It is a surprisingly versatile condiment.


Chop up 8 ounces of Bramley’s seedling apples (those in North America, use Mackintosh apples) and slice one ‘small or moderate quince’. You don’t need to peel or core the fruit, but I would scrub off the naturally-occurring fluff from the skin of the quince, should it have some. Place in a pan along with ¼ pint of water, a heaped tablespoon of sugar (omit if using Mackintosh apples) and a pared strip of lemon peel. Cover and simmer until a puply, then pass through a sieve or mouli-legumes to remove peel &c. 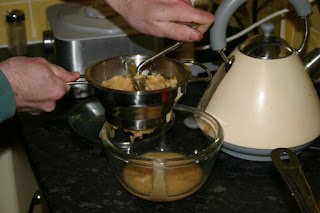 Put back on the heat and stir until it thickens up; you don’t want it ‘sloppy and wet’ as Griggers says. Stir in one ounce of butter and give the finished sauce a healthy seasoning of black pepper.


#360 Apple Sauce I. I liked this one very much and ate it with some rabbit which it complemented very well. The quince mellowed the Bramley’s, making them much less tart. Tres bon. 7.5/10. 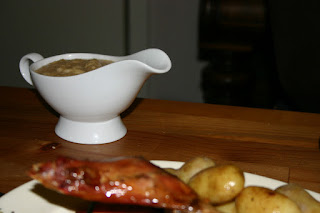