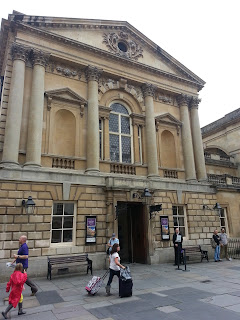 The great thing about Bath is that it has such history; you cannot help but find something to be amazed by at the turn of every street corner.


The famous spa at Bath has attracted people for millennia – there is archaeological evidence of human settlement going back 10,000 years. Bath was founded in 863BC by a chap called Bladud. Suffering from leprosy, he had been ostracised from society and found that bathing in the warm, muddy springs, after seeing pigs doing the same, cured him. It must have put him in fine fettle because he later went on to become the ninth King of the Britons and to father King Lear.


Of course it was the Romans that really transformed the place, creating the town Aqua Sulis with the baths that are there today in fine working order. 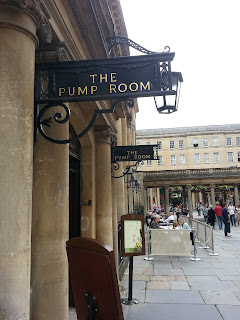 From the point of view of food, however, Bath really came into its own in the eighteenth and nineteenth centuries when it was deluged by the holidaying  middle classes. The Roman Baths and Pump Room were restored to their former glories after centuries of neglect, making Bath the best and most popular of all the spa towns. This wasn’t just because of its locality to London, or that it was in a lovely part of England; it was because Bath simply had the best of everything. It was a trade epicentre: excellent salt marsh lamb from Wales, a seemingly endless supply of fruit and vegetables from Tewkesbury, cider from Glastonbury, apricots, cherries and plums from the Cotswolds, cream and junkets from Devon and Somerset, excellent freshwater fish – especially elvers – from the Severn Valley as well as sea fish from the ports of Cornwall, all came to one place. And that was just British produce! I haven’t mentioned the French brandy, the Spanish wine or the exotic spices from further afield.


All this has made Bath what it is today. Its food heritage, however, seems to have been boiled down into two things: Bath buns and Sally Lunns. 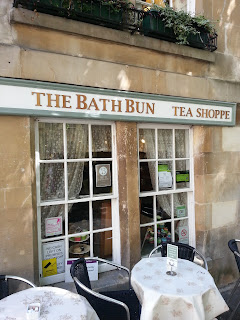 I’ve never seen either Bath buns or Sally Lunns anywhere other than Bath itself, which just goes to show that we still have regional cooking in an age of a swirling population. I like that you don’t see them everywhere; it makes eating one a rare treat to be relished. There are, of course, stories attached to the invention of these enriched breads which should be taken with a huge pinch of salt.


A bath bun is a large fruit bun, made with dough similar to that of a Chelsea bun or hot cross bun. The bread dough is enriched with eggs, sugar and currants. At the bottom of each bun is a lump of sugar and the freshly-baked bun is finished with a sticky wash, extra currants and crushed loaf sugar or sugar nibs. 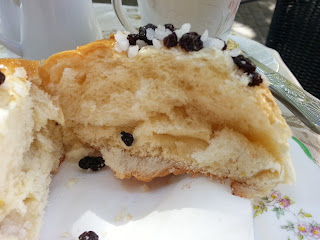 The Bath bun is said to have been invented by a doctor called William Oliver in the 18th century. After his patients visited the Roman baths he would give them a nourishing Bath bun. It was soon apparent that his plan was not working as he expected when he realised his patients were getting somewhat portly. He withdrew the buns and replaced them with hard, dry water biscuits.


I must say that I would have become a hypochondriac if I was one of Oliver’s patients! I would have used any excuse to get my hands on one. They are so delicious - sweet and sticky and very bad for you. I can’t put the attractiveness of the Bath bun better than W Chambers, writing in his Edinburgh Journal of 1855:


The Bath-bun is a sturdy and gorgeous usurper – a new potentiate, whose blandishments have won away a great many children, we regret to say, from their lawful allegiance to the plum-bun. The Bath-bun is not only a toothsome dainty, but showy and alluring withal. It was easier for ancient mariners to resist the temptations of the Sirens, than it is for a modern child to turn away from a Bath-bun…Large, solid, and imposing, it challenges attention, and fascinates its little purchasers.


We can see from this quote that the Bath bun was popular, not just in Bath, but England and Scotland, so what happened to it? Enriched breads are still pretty popular in Britain, even with the advent of comparatively modern chemically-aerated sponge cakes. Strange.


Here’s the recipe that appears in English food. It contains no currants, which I think are as essential as the sugar lumps:


First of all make the ferment – sometimes called a sponge – a yeasty batter that gets the microbial metabolism underway quick smart. Mash together 1 ½ ounces of fresh yeast with the same weight of granulated sugar in a little water taken from ½ pint of blood-heat water. Add the remainder of the water and leave until the mixture has begun to foam, around 20 minutes. As you wait, weigh out 15 ounces of eggs in their shells and crack them into a bowl. Beat in 5 ounces of strong white bread flour and then add the yeast mixture once foaming. Cover with cling film or a damp tea towel so that it can rise for around an hour. 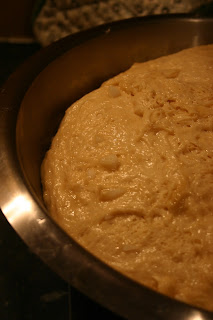 To make the dough, mix into the ferment the following: 30 ounces of strong white bread flour, 12 ounces of softened butter, 3 ounces of granulated sugar, 12 ounces of broken sugar lumps, a good pinch each of mixed spice and salt and a few drops of lemon juice.


Jane says for us to knead this dough together; good luck with that, the mixture is more a batter than a dough. I did this impossible task in my Kitchen Aid. Cover and leave to prove again until its double the size, which could take 90 minutes or longer with such an enriched dough weighed down with so many goodies.


Knock back the dough (the best part of the bread-making process) and ‘shape the dough into pieces the size of a small Cox’s orange pippin’. Good luck with that, too. 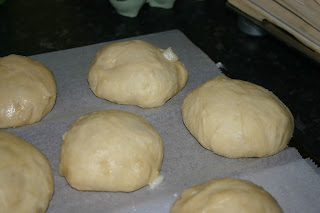 Somehow place the pieces of dough on baking sheets lined with greaseproof paper, cover with plastic bags and allow to rise again.


Bake at 200⁰C for around 20 minutes, swapping trays half way though to achieve an even bake.


When almost baked, make the bun wash by boiling together 2 ounces of sugar with 5 tablespoons of water. As soon as the buns come out of the oven, place on racks and brush with the syrupy mixture. Lastly, crumble over more broken sugar lumps. 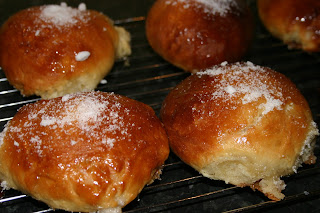 #419 Cobb’s Bath Buns. As with many of Jane’s recipes from the Bread section of the book I didn’t get on very well with this recipe. The dough was tricky to handle and I couldn’t achieve the proud, round shape I expect from a Bath bun. They also seemed to stale almost immediately. Bit of a damp squib for the last recipe in this section. 3.5/10.
Posted by Neil Buttery at 12:43 PM 9 comments: 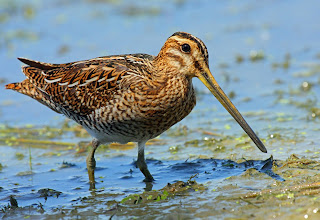 Sometimes…walking home across a boggy area where heather gave way to rushes and reed grasses, I would be startled by an eerie throbbing, bleating sound rising to a soft fluting crescendo…I have heard it hundreds of times and it never ceases to make the hairs stir on the back of my neck. This beautiful wind music is a cock snipe ‘drumming’…This hauntingly lovely sound…is the first promise of spring.


The snipe is our smallest game bird, and with its shy and secretive nature and dappled brown plumage, it is probably the most difficult of the game birds to shoot. It is for this reason that you won’t come across many of these unless you are a hunter or you know one very well. It’s a good job that they are difficult to hunt because they are considered the most delicious of the game birds! Conservation is always a priority with these indigenous game species, but their elusiveness is almost self-managing, keeping a highly-fluctuating population safe.


Sorry for the massive gap between posts folks, but I’ve only gone and opened up a restaurant! News of this will follow very soon. Needless to say, I’ve been pretty busy, but finally I’m writing up some of my recipe backlog.


Jane’s recipe for roast snipe is brief in the extreme:


Recipes for redcurrant jelly can be found here and a recipe for game chips makes up part of #122 Roast Pheasants, cooked many moons ago


Woodcock and snipe are pretty much identical except in size, so snipe too can be cooked with their innards or ‘trail’ intact. This is because they defecate when they take off for flight. The trail can be scooped out at table and spread on the slice of toast the bird was cooked on. You can, of course, remove the innards before you roast your snipe, if this notion is repellent to you. I would encourage you to try it, as it is delicious; like gamey Marmite. The heads are also left on, and sliced lengthways so that the brain can be eaten.


It’s worth mentioning, however, the very short hanging time required for birds eaten in this way – anything over 36 hours I find too gamey. I remember well once wretching over the kitchen sink after eating a far too ripe woodcock; delicious gaminess merging into dead, rotten animal all too quickly in these little birds. It’s a glamourous life I lead. 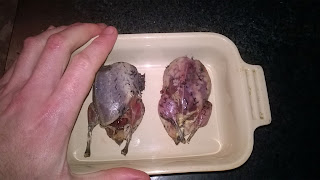 I managed to find some snipe this year at my favourite butchers shop, WH Frost in Chorlton, Manchester. Unfortunately their trails and heads had been removed so I couldn’t roast them in the traditional manner. 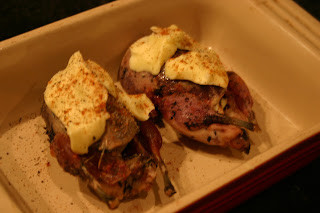 I simply seasoned them inside and out and popped a tiny knob of butter into their cavities and onto their breasts with a sprinkling of smoked paprika and roasted them for just 8 minutes at 230⁰C. I served them with some Morrocan-style buckwheat. Not very English, but there you go. 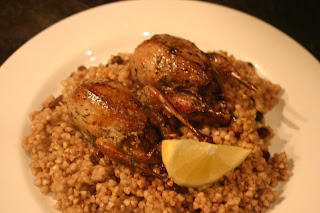 #418 Snipe. Even though I couldn’t cook them in the traditional manner, they were still very delicious birds. I expected them to be stronger in flavour compared to woodcock, but they were actually more delicate. I can see why so many people prize them above all others. Little did I know that when I cooked these, way back in December, they would appear on my Valentine’s Day menu in February! If you see some in your butcher’s shop, snap some up. 8/10.
Posted by Neil Buttery at 1:22 PM 2 comments: