Here’s a recipe from English Food I have been meaning to make for a while but never have gotten around to until now. I love nothing more than having a go at making these very old recipes – a true window into the past. I can think of no other way than experiencing history. It doesn’t even matter if it tastes good! Quite often some of them have become part of our repertoire at The Buttery, but will this one?
This is an interesting case – mediaeval gingerbread doesn’t resemble modern gingerbreads (like #174 Grasmere Gingerbread I) or even ginger cakes like parkin or Jane’s Ginger Cake (#53). It’s literally ginger and bread mixed with honey and some other spices, so it turns out that this gingerbread is the predecessor of treacle tart too! (I’m sure if I tried hard enough I could produce some kind of family tree of food.) 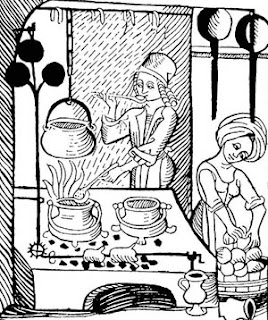 Mediaeval woodcut, c. 1485
Jane doesn’t give the original recipe, though I have managed to track it down; it’s from an undated medical manuscript known catchily as BL MS Sloane 121, thought to be late fourteenth or early fifteenth century. Many of these Early and Middle English recipes are difficult to decipher, but this one isn’t too tricky:
To make gingerbrede. Take goode honye & clarefie it on the fere, & take fayre paynemayn or wastel brede & grate it, & caste it into the boylenge hony, & stere it well togyderfast with a sklyse that it bren not to the vessel. & then take it doun and put therin ginger, longe pepere & saundres, & tempere it up with thin hands; & than put hem to a flatt boyste & strawe theron suger, & pick therin clowes rounde aboute by the egge and in the mydes, yf it plece you, &c.
Today there is no need to clarify honey, so that step can be missed out, but then it is simply a case of heating up honey and adding some spices; ginger, long pepper (a very common spice then, which has been superseded these days by peppercorns) and sanders (heated and powdered sandalwood) for colour. Stir these in making sure nothing gets burnt, then shape onto a flat tray. Extra sugar can be scattered over and it can be decorated around the edge and middle with cloves. Often gingerbread would be decorated with gold leaf. Other spices used include saffron, cinnamon, galangal, nutmeg, mace and cardamom.
Oddly, Jane found some recipes for gingerbread that do not contain ginger! This could be a mistake by the scribe (these manuscripts predate the printing press so were all handwritten) or it could be that gingerbread became a word for any spiced honey-bread mixture. Jane flags up the point the point that in some European countries the gingerbread used to make gingerbread houses don’t contain ginger!
Jane’s method:
I made some gingerbread…and found you needed about 1 oz of breadcrumbs to one heaped dessertspoonful of honey…Some kind of colouring was needed, because the mixture would have been too pale without it: I used powdered saffron. By stirring the crumbs into the very hot honey, I made a thick paste which could easily be handled and moulded into shape, like almond paste. When the cake was cool, we ate it in slices…
She doesn’t actually say which spices she used, but it seems she used ground ginger, cinnamon and black pepper as in the original recipe. She doesn’t give any proportions of spice either.
My method:
I used the fact that this mediaeval gingerbread was the precursor to the treacle tart, and made a honey-ginger tart. 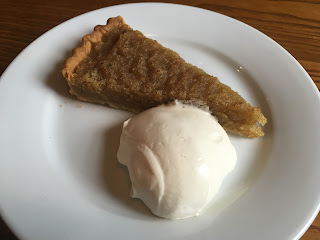 900g honey
1 tbs ground ginger
2 tsp mixed spice
½ tsp ground black pepper
½ tsp ground cardamom
pinch saffron
zest and juice of 1 lemon (optional, see below)
325g stale breadcrumbs
a 10-inch blind-baked sweet pastry case
To save yourself from a horrible sticky mess, measure the honey straight into your saucepan and warm it gently. Add the spices, crumbling in the saffron and stir in with a wooden spoon. 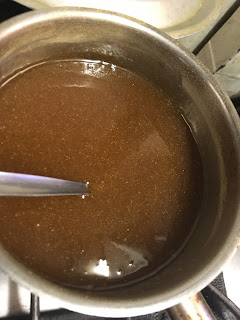 Give the mixture a taste, if you want to add more spice, you can; if it tastes far too sweet add the juice and zest of a lemon. Pour in the breadcrumbs and stir thouroughly.
If you want, you can pour this mixture into a lined tin, even better pour it into the pastry case. Either way, bake the mixture for around 20 minutes in a low oven, around 150⁰C to help it firm up. You can then let it cool and cut up appropriately. If the top looks a bit pale and boring – as mine did – quickly brown it with a blowtorch. 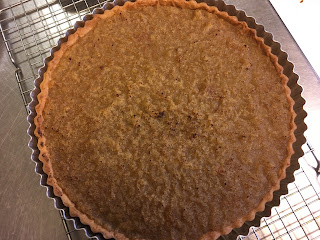 We were quite impressed with the result and put it on the menu with a nicely-placed blob of Frangelico flavoured sweet cream.
#423 Mediaeval Gingerbread. It’s always good to find these excellent ancient recipes, especially when it produces something delicious. For our modern tastes, it definitely needed a bit of lemon, and only really needed the ginger, ground mixed spice and black pepper; the saffron and cardamom were a bit unnecessary. Anyway, a lovely peek into our mediaeval past, 8/10.
Posted by Neil Buttery at 5:21 PM No comments: