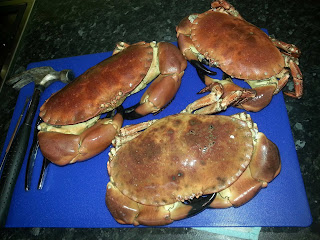 This recipe I tried a couple of months ago and thought it so good, it should make an appearance as the fish course in my pop-up restaurant earlier in the month. The recipe has been lifted from a pamphlet by Elizabeth David called English Potted Meats and Fish Pastes. You can find the pamphlet in her anthology An Omelette and a Glass of Wine (a book any interested cook worth their salt should own). Ms David honourably adapted old recipes and updated them for the contemporary population. They still hold up today, I take some pride in taking up her baton – via Jane Grigson – albeit on a small scale, in showing that these dishes need to be brought back and celebrated. They are so different from the nasty little pots found on our supermarket shelves.


For this recipe you need to start with a large 2 pound crab – ask your fishmonger in advance to bagsy you a large, hefty-clawed male for you. If such a thing is not available, buy 2 smaller hen crabs. At home, dip into your toolbox for a hammer and root out your lobster tools (or alternatively a nutcracker and skewer) and get to work picking and scooping the meat from the crab, keeping the brown meat in separate pots from the white. It’s worth mentioning that you can buy the tubs of pre-picked crabmeat, but the result will not be anywhere near as delicious. 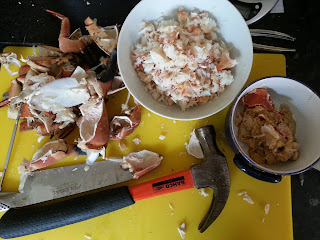 How do you pick a crab of its meat? This excellent walk-through guide from Channel 4 is very good. One day I’ll write my own, if I ever get round to it!


Season the crab meats with salt, black pepper, mace, nutmeg and Cayenne pepper, as well as a good squeeze of lemon juice. Now layer up the two meats in a single mould such a stoneware pot, or several smaller ones. Start with half of the white meat, then the brown and then the remainder of the white. Pack it down firmly and pour over melted slightly-salted butter; you will need around half a pound of butter altogether. Griggers here recommends Lurpak, which eats much better in this sort of dish. 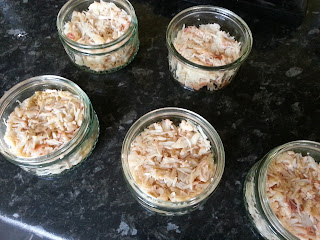 Bake in a ban Marie at 150⁰C for 25-30 minutes. Remove and pour over some clarified butter. Allow to cool and store in the fridge covered with foil or clingfilm. If you put a good thick layer of butter over the crab, it will keep for several days. Don’t forget to take it out of the fridge a few hours before you want to eat it.


I served the potted crab simply with spelt bread and a lemon wedge.


#378 Elizabeth David’s Potted Crab. Absolutely delicious, the rich butter and creamy crab meat are suitably sharpened by the warming spices and lemon juice. This must be the best of the potted meat and fish dishes in the book and I cannot sing its praises high enough. 10/10 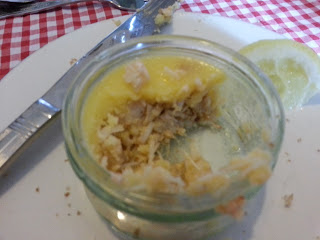 An English classic, one of which I have never made; I’ve eaten plenty of them of course, but never really bothered about going the whole hog and piping cream into them. Fearing I was a becoming a biscuit heathen I did a little research and found that in many parts of England, especially the south and London, people ate them on their own as large rounds, rather than the familiar cigarette shapes where they called them ‘jumbles’. Phew.


Don’t fear the brandy snap, it turns out they are not as difficult to make as people say, though a little patience is required for the first few before you get into your stride: too hot and they tear (and burn!), too cool and they cannot be shaped and break. Do them one at a time and if the others get too cool, pop them back in the oven for a few seconds to soften again. No probs!


This recipe makes up to 36 brandy snaps – that seems a lot, but they keep for weeks in an air-tight box.


To begin, melt together 4 ounces each of butter, golden syrup and granulated sugar in a saucepan. Mix until everything has melted and is smooth, but be careful not to let it boil. Take off the heat and when ‘barely tepid’ mix in 4 ounces of plain flour, a pinch of salt, 2 teaspoons of ground ginger, a teaspoon of lemon juice and 2 teaspoons of brandy. This seems like a paltry amount of brandy but it really does make a difference to the flavour. 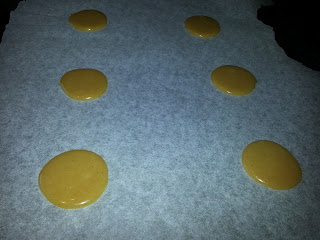 Preheat the oven to 200⁰C (400⁰F) whilst you get on with spooning out the mixture onto baking sheets. The best thing to do here is to cover two large baking sheets with greaseproof paper and to spoon out sparsely teaspoons of the mixture; these things really spread so you’ll only want 4 or 6 spoonsful per sheet. Make sure your spoons are small, equal in size and neat; I found that using a melon-baller helped here. 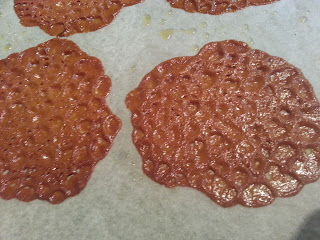 Bake them for about 8 minutes until they have spread, darkened and bubbled up. Remove from the oven and let them cool a little before shaping. For the classic cigarette shape lift one of the paper using a palette knife – if it tears then it is too hot – and lie it across the handle of a wooden spoon and fold it over. Slip it off and do the next one; if too cool pop back in the oven. To make basket shapes, lie the brandy snap over the base of a jam jar. 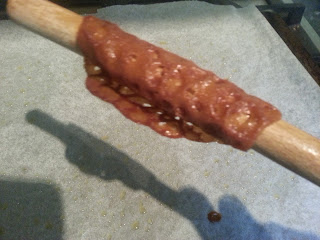 If you want to fill the brandy snaps, whip up ½ a pint of double cream and pipe the cream inside. There’s no need to sweeten the cream here as the snaps themselves are so sweet.


#377 Brandy Snaps. These were absolutely delicious – crisp, slightly spiced caramels that cracked satisfyingly into bland cream (Bland is not always bad!). Lovely, and so much better than bought. Go make some! 9/10 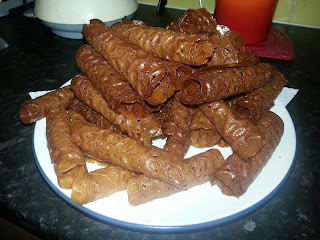