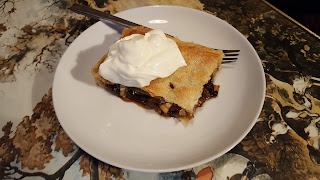 Jane Grigson was brought up in the far north of England, and this currant cake was very popular there when she was a child. At the end of winter, when there was nothing fresh left in store aside from a few apples and jars of dried fruit, this cake – more a tart really – would be baked. Everywhere in the north has a similar sweetmeat: Eccles cakes, Chorley cakes and currant squares, and of course mince pies. Children usually called them squashed fly cakes or fly cemeteries. ‘We loved it’, she says, ‘and giggled in a corner, while the family talked. No one realised that they were eating a cake with a history, and medieval ancestors.’


In these days of seasonless, year-round fresh fruit and vegetables flown in from all four corners of the globe, many turn their noses up at these dried-fruit based treats. Well not me! I could eat them all year round, though they do taste most delicious when it’s cold and bracing outside. 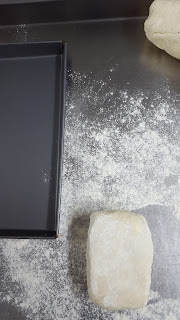 To make the currant cake, first make a rich shortcrust pastry by rubbing in 5 ounces of butter and 5 ounces of lard into a pound of plain flour along with a pinch of salt. Form a dough with a little cold water, wrap in cling film and pop in the fridge to rest for around 30 minutes.
Use half the pastry to line a tin with approximate dimensions of 7” x 11” x 1”. My tin wasn’t quite the size as in Jane’s recipe, but it still worked very well. 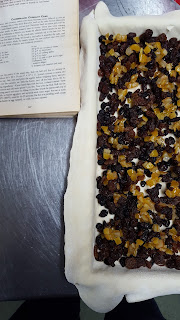 Now it’s time to layer up the filling ingredients. Start with a good covering of raisins or currants (10 ounces) and then 4 ounces of candied mixed peel. Peel, core and grate a medium-sized cooking apple and scatter that over the mixed fruit. Next, melt 5 ounces of butter in a saucepan, remove from the heat and add 4 ounces of pale or dark soft brown sugar (when given the choice, I always go for the latter), 5 tablespoons of rum, a teaspoon of ground allspice and half a teaspoon each of ground cinnamon and mace. Beat them all together and pour evenly over the fruit. 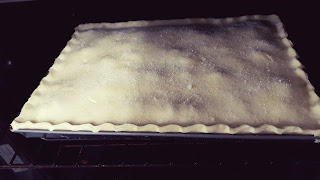 Now roll out the remainder of the dough so that you can cover it – don’t forget to brush the edges with milk or beaten egg before you cover. Press down on the edges, then trim and crimp the pastry. Now brush the lid and scatter over some granulated or Demerara sugar. 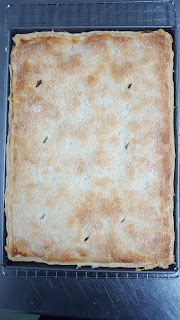 
Jane suggests either eating hot as a dessert with cream, custard or #211 Cumberland Rum Butter, or cold cut into squares for teatime. 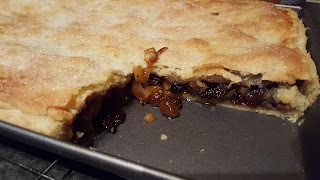 #429 Cumberland Currant Cake. Well I ate this oblong of deliciousness both hot and cold, and it was delicious. The pastry was very rich and the filling sweet yet still tart from the cooking apples; not unlike a giant, square mince pie; and seeing as I’m a mince pie fan, it’s getting a very good mark. When I return to trade at Levenshulme Market later this month, I shall be bringing some of this to sell. Delicious! 9.5/10.
Posted by Neil Buttery at 2:44 PM 2 comments: