Sorry for the lax attitude towards the blog everyone, but I have an excuse! I have now moved into my apartment in Midtown Houston, and I have been getting it filled with furniture. Unfortunately I have no table and chairs yet, so I can’t really get people round for dinner parties just yet. Plus I have pretty basic kitchen equipment at the minute – though everyone at work has been brilliant giving me kitchen stuff, so hopefully all will be up and running as normal pretty soon.

There are still several easy recipes to do in the meantime and this one couldn’t be simpler and is another recipe from Robert May (see this post). Cinnamon toast has been a staple sweet snack in England for a good few hundred years and the recipe hasn’t really changed much, and makes a very good substitute for cinnamon Danish pastry, should you get a midnight craving, as they are actually very similar – especially if May’s method is used because it uses a paste of sugar, cinnamon and claret.

I managed to get a bottle of Texan claret from the most amazing off-license (liquor store) called Spec’s, which is apparently the largest one in the whole of the United States and I actually got lost in the red wine section! It deserves an entry to itself. It is just a good job I don’t have alcoholic tendencies. Anyways, for those of you who know nothing about wine (this includes me, by the way), claret is usually red wine made in the Bordeaux region of France, so technically there’s no such thing as Texan Claret. Funnily enough, the Frenchies don’t recognise claret as a term itself; it’s a very British term used generally from May’s time to describe deep red wines such as Bordeaux and before that in medieval times for spiced wines, such as hippocras. As an aside, there is no recipe for hippocras or even mulled wine in English Food, so I shall try and hunt one out for the blog closer to Christmas.

Anyway, enough of my blabbering, here’s the old recipe that is not simply buttered toast sprinkled with cinnamon and sugar like these days:


Begin by making the topping by simply making a paste from sugar and cinnamon in the proportions of one tablespoon of sugar to one teaspoon of ground cinnamon. Use the claret to make a nice spreadable paste. Butter some slices of toast, lay them on a baking sheet and spread the paste over them. Warm through briefly in a hot oven for about 5 minutes and serve it forth! 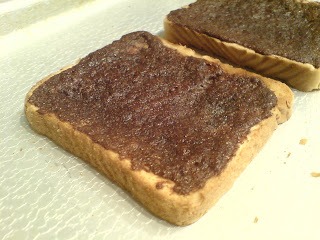 #257 Cinnamon Toast. Forever an English Classic that is much improved by going back to the original way of doing things, although I can’t imagine people going out and buying claret just for the recipe (myself excluded, natch). However, I’m sure if you ever have any red wine knocking around you can use it to make this very simple and delectable sweetmeat. The important thing is to make a paste – it melds together and forms a slight crust, so if you have no wine, use anything else, even water or milk would do, I reckon. I ate four slices, what a pig. 7/10.
Posted by Neil Buttery at 2:08 AM 2 comments:

An old-fashioned recipe this one and it comes from a book called The Accomplisht Cook, or the Art and Mystery of Cooking by Robert May. It was published in 1660. To put this in context, King Charles II was on the throne after the country had briefly been de-royalled by the big old puritan misery-guts Oliver Cromwell.


Robert May himself was from a family of chefs, but obviously wanted to tell the common man how to cook; at least via rich home owners. In those days, you see, the lady of the house would have presented the head cook/chef with such a book to use. Assuming they could read. Read more about him and his book here.

Anyways, this is a very good recipe to do in the autumn because a large variety of squashes are available. This recipe can be used with ‘gourds, pompions, cucumbers and musk melons’, i.e. any soft or hard squash. The squashes are first baked in the oven at 190⁰C until tender; the length of time will depend upon the size of the squash. If the skin is very thick, it would be better to simmer it, says Griggers. I used some quite small squashes and decided to bake them.

Meanwhile prepare the stuffing for the squashes. You need to chop some onion and apples in the ratio of 1:2. The original recipe suggests using Cox’s Orange Pippins. These are not available so I used Granny Smith apples as they are quite tart. Place them in a casserole dish along with a decent knob (or knobs) of butter. Cover and bake in the oven alongside the squashes.

When the squashes are done, cut in half and scoop out the seeds and keep warm while you deal with the filling. Mash the apples and onions together and season with sugar, salt and black pepper. Fill the squash halves generously and return the whole thing to the oven for a short time to give it time to dry out a little. Serve with hot buttered toast. 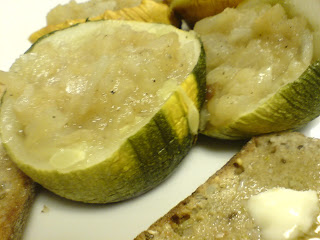 #256 Buttered Squashes. I must admit I have been putting off many of the recipes in the Vegetables chapter because they seem too much of a faff to make and don’t necessarily look that tasty. This was one of them, but how wrong I was. The squashes were tender and slightly earthy in flavour which stood up very well against the sweet-sharp onion and apple filling. A big surprise that was a great supper dish, but would make a very nice first course or a good addition to some roast pork I reckon. 7/10
Posted by Neil Buttery at 2:41 AM 3 comments:

God, I love lemon curd. I once tried to make it a while ago and it was a complete disaster. Then, I was a mere amateur and these days I am a wee bit better at these more tricky recipes. The process for making lemon curd (or indeed any fruit curd) is to thicken lemon juice, sugar and butter with eggs. Any sauce that involves this process, like ice cream and custard can potentially end up in disaster, because over-heating scrambles the eggs and you end up with a horrible mess.


I haven’t found any lemon curd here in Houston and no one seems to know what I’m talking about at work, which surprises me for some reason. I don’t know why. So for those of you not in the know, lemon curd is essentially used like jam – use in sandwiches, to make tarts or as a cake filling. It has been popular since the mid-eighteenth century and is a kind of preserve, but doesn’t keep any where near as long as jam due to the butter and eggs. Therefore it is best made in small quantities, this is not a problem is it is much less of a rigmarole to make than jam. This recipe makes around two jars of lemon curd.

Grate the zest of two lemons into a glass bowl along with their juice, 3 ounces of butter and 7 ounces of sugar lumps (you could use granulated here too, I don’t know why sugar lumps are used here). Place the bowl over a pan of simmering water and stir until the butter has melted and the sugar dissolved. Whilst that is happening, crack 3 large eggs into another bowl and beat well. Sieve the eggs into the mixture (this prevents any lumps of white going in) and stir until the mixture thickens. This takes a while, and if you’re not used to thickening sauces with eggs it is best to be tentative and not have the heat to high. It will thicken quite alot, as long as the water is simmering beneath. Spoon the mixture into sterilised jars and allow to cool. Keep them in a cool place, but once open it’s probably best to keep the curd in the fridge, especially in this bloody Houston heat! 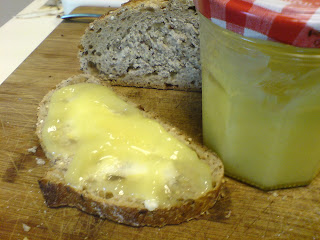 #255 Lemon Curd. This is a brilliant recipe for lemon curd. It isn’t too sweet and has a lot of zing; the inclusion of the zest really gives it some punch. It took me right back to England eating this! Delish. 8.5/10
Posted by Neil Buttery at 2:17 AM 4 comments:

After a slow few months, it is time to get Neil Cooks Grigson up and running again. I’m settling in here in Texas now, which means I’m getting more than a little homesick. What better way is there to get over it than making some nice English foods?

I was a bit hungover this morning so this recipe I hoped would be the perfect cure: carbs, fat and salt plus the hair of the dog, the perfect combination. The cheese required for this is single or double Gloucester. Good cheeses are hard to find in Houston – typical American cheeses are not the best and anything I considered proper (i.e. European) are pretty expensive and/or difficult to find. However I did find an excellent shop which is set out like a big market called the Epicurean Market. There’s a few of them in Houston and they sell a lot of European foods. So finding places like this is great for my blog.

This recipe is quick and easy and full of delicious calories:

Start by slicing some double or single Gloucester cheese thinly and arrange them in a small ovenproof dish. Spread some good mustard over the top – Griggers suggests Tewksbury wholegrain, but any piquant wholegrain will be good – and then pour over enough ale to just cover the cheese. Bake in a moderate oven until the whole things melts and becomes a sauce. Meanwhile, toast some wholemeal or granary bread, arrange on a plate and then moisten with a little warmed ale. Lastly spoon over the melted cheese and serve with a glass of ale. 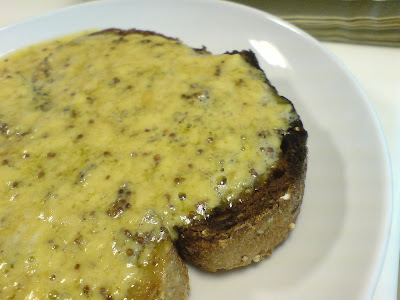 #254 Gloucestershire Cheese and Ale. A good traditional cheesy dish very similar to those served in Gentlemen’s Clubs in Edwardian times. Very rich but the mustard and bitter ale helped to cut through the cheese. I was right in that it really helped to sort out my hangover too! 7.5/10
Posted by Neil Buttery at 1:19 AM No comments: