A good dessert to make if people are round because you can make it a couple of days in advance.

The tea in question for this tea cream recipe is green gunpowder tea. Green tea is a strange thing – I don’t ever drink it because it tastes of a combination of washing-up water and seaweed. Bleurgh. However, having it with cream and sugar did appeal slightly more; cream and sugar never taste bad, now do they!?

FYI: green tea comes from the same plant as our more familiar ‘black’ tea (e.g. PG Tips, Tetley, etc), but is unfermented thus retains its natural green colour, as opposed to black tea which turns its dark colour due to oxidisation during fermentation. Green tea is popular in China and Japan as we all know – but also in Muslim counties where it is forbidden to drink fermented tea. How bizarre. Anyone know why this is?

To make this tea cream mix together half a pint each of double and single cream in a jug. Pour around three-quarters of it into a small saucepan along with two tablespoons of sugar and an ounce of green gunpowder tea. Slowly bring to a boil, though keep on tasting it as you don’t want the tea to be ‘over-stewed’. Pour the hot cream into a bowl through a sieve. Taste again; if too strong add more cream. Use either a packet of powdered or five leaves of leaf gelatine to make the cream set. It’s best to follow the instructions on the packet at this point but generally you dissolve the powdered stuff in a little hot water and stir it into the cream, or soak leaf gelatine in cold water until soft and stir into the still-hot cream. Pour the whole lot into a mould – buy a fancy one if you can, I did. Cover with cling-film, allow to cool and then place in the fridge until needed. Turn it out onto a plate – you will need to dip the mould in hot water briefly to help loosen the jelly, I left it in too long and it went a little liquid around the edges. Serves five or six. 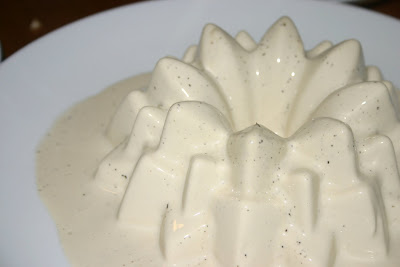 #201 Tea Cream. A funny one this one. I really liked the creaminess of the ‘jelly’, but the tea taste – though strong when hot, diminished greatly when chilled so I couldn’t really tell it was there. I certainly liked it enough to give it a second go at some point though. It did look very good in its fancy shape. 6/10.
Posted by Neil Buttery at 9:13 PM

I was wary of this one as it didn't sound terribly appetising, but I though it was great! I could definitely taste the tea a lot. The whole thing tasted something like warm tea-flavoured ice-cream if that makes sense. I've made it sound horrible again, but I really think it should be the new alternative to post-dinner tea or coffee. 8/10.

i have a small issue with jelly and jelly like products as when i put it in my mouth i dont know whether to chew it, swallow it whole or let it melt in my mouth, very strange.
However the tea cream had a very creamy tea taste which wasnt wholly unpleasant (again i'm not making this sound very nice)
Not my favourite, so will give it 4/10, if it wasnt for my strange jelly issues it would get 6/10.
Ta paddy

mebs i should make a coffee and a tea one nex time, so people can have the choice between them!

Never had a creamy jelly, never had tea in any food product, never expected this to be nice. But it was! I might've brewed it longer to really get a tea kick. Good desert for minamilists, aesthetically. 6.5/10

I was already a little tiddly by the time dessert was served and am not really a sweet fan anyway, but this was delicious. The most grown-up jelly I've ver had. It was mildly flavoured and light, but most importantly for me - not too sweet! I've never had a creamy jelly before but thought the combination, with the tea, worked really well. A nice way to finish off a meal for those with not the biggest sweet tooth. 7/10

I'm assuming that fermentation = alcohol and Islam and booze don't get along.

Not neccesarily...all green and black teas are fermented - this doesn't usually mean alcohol is produced, or that is in the final product. White tea is pure and unfermented I believe. The yeast in dough ferments when making bread, producing carbon dioxide and alcohol...but all the alcohol evaporates in the baking process.

So gunpowder tea, like regular tea, is absolutely fine to drink if you abstain from drinking alcohol.

Hope that clears it up for you.