Christmas is a-coming! The consumerist nightmare has begun and there’s nothing like it to kill the Christmas spirit. The best way to counteract this is to make some lovely Christmas fayre. The Christmas cake is done and the only other necessity for the encroaching festivities is (in my opinion) mincemeat. I made Mrs Beeton’s recipe last year and gave a potted history of the foodstuff (see this post). This year I’m making orange mincemeat; it better be nice because I really liked Beeton’s. It should be good though; there’s plenty of orange juice and one of my favourite boozy drinks ever – Cointreau. Of course, we shall have to wait a while before I review them (although I’m sure I’ll crack a jar open well before Christmas).

If you want to make your own mincemeat, make sure that you make it at least two weeks before you want to use it as it needs that long to mature. If you’ve never made it, have a go, it really is very easy – there is no cooking involved, just some chopping, measuring and mixing. 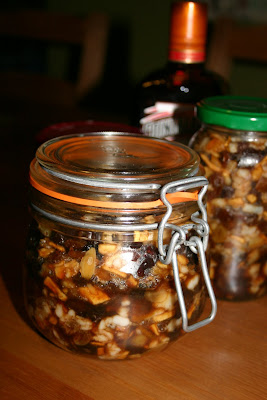 This recipe makes absolutely loads of mincemeat – around ten jars – so reduce the quantities if you want to make less. To make it, simply mix together the following ingredients together in the following order in a huge bowl:

8 ounces of candied orange and lemon peel
2 pounds of apples, peeled, cored and chopped
One pound of chopped suet (use fresh, if you can)
One pounds each of raisins, currants and sultanas
One pound of dark brown sugar
1 freshly grated nutmeg
4 ounces of blanched slivered almonds
The juice and grated rind of two oranges
Four tablespoons of brandy
Eight tablespoons of orange liqueur (e.g. Cointreau)

Pack the mincemeat well into sterilised jars and leave for at least two weeks. (FYI to sterilise the jars, put them along with their lids on trays in an oven set to 110⁰C for 25 minutes, pot whilst they are still warm.)
Posted by Neil Buttery at 12:46 PM

Best blog. Bookmarked for a daily visit. I stumbled on it while looking for a mincemeat sans suet, which I think isn't necessary (just makes an ersatz version of the original mincemeat). Interested in your academic research vis-a-vis food and would like to know yr. attitude to music as I think it was the development of cooking that might have refined early man's approach to singing and dancing. And could German cuisine account for Beethoven, or Italian pasta for Rossini?

Thanks for all the goodies.

Thanks for your comment, Eric. I've not tried this recipe yet - waiting for it to mature another week or so, but i can certainly recommend the other mincemeat recipe. Suet's probably not necessary if you are being a purist, and all recipes should be treated as dynamic so they fit your own tastes - a luxury i'm not allowed for this endeavour. If it's on the recipe list it has to go in!

In our evolutionary past, any social activity that helped build and form bonds within the group will have been preserved and developed; they have all evolved togehter through time and are all closely linked. Music, food, literature and fine art have all arisen for the same reason and therefore are all the same thing - ways for groups to share and be cohesive and productive. It's probably the same reason why religious belief developed too, though I'm not so in favour of keeping that going these days (but that's a very separate issue!). That 's my opinion in a nutshell!

Thanks again for reading and commenting.