#209 Chicken and Leek Pie from Wales

During this rubbish weather (God, I am so English – all I do is talk about the weather) there is nothing like a good pie. The Farmers Market in Manchester Piccadilly Gardens just happened to be on as I was walking through and I saw a stall selling some very nice free range farm chickens and so I snapped one up. I then consulted the book for chicken recipes and decided on this. It seemed a little bit like the pork and apple pie I did a while ago in that there is no gravy or sauce per se but runny juices instead. I was slightly concerned about this as it was a major short-falling in the pork pie. Anyways, I have cook everything in this book whether I like it or not.

It is best to start this pie the day before you want to cook it, or at least in the morning. Start by placing a roasting or boiling chicken in a close-fitting pan along with a quartered, unpeeled onion, two tablespoons of chopped celery (a stalk, in other words), a bouquet garni and some salt and pepper. Place a close fitting lid on top, bring to a boil and simmer until cooked. The cooking time will be dependent upon the type of chicken you have – around 45 minutes for roasters, and at least an hour for boilers. Let the chicken cool in the stock (leave overnight if you want). Remove it and strip the carcass, cutting the meat into nice chunks. Skim the stock – if it seems a bit bland, add more seasoning or return the bones to the pot and simmer again. You could also reduce the stock after straining it too. 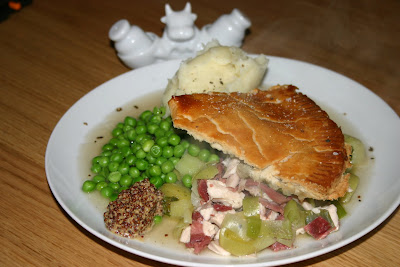 Arrange the pieces of chicken in a pie dish along with 4 ounces of sliced ox tongue that has been cut up. Next, wash, trim and slice a load of leeks – Griggers says eight in all, but I reckon that that it all depends on the size of your pie dish. Either way, blanch them for two minutes in salted water before draining and adding to the pie dish. Chop two tablespoons of parsley and sprinkle that over and then ladle the stock over the lot until it comes up about half way up the chicken and veg. Season well. Cover with shortcrust pastry (the amount will depend on the dimensions of your pie dish). To make sure you get a good seal, when you roll it out cut a strip of pastry and glue it around the rim of the dish with some beaten egg. Brush glued pastry with more egg and lay the pastry over. Press it down, make a central hole and brush the top with egg. Bake at 230⁰C for 20 minutes, then turn the oven down to 180-190⁰C for another 20. Allow to cool a little before you eat it. It had it with mash and peas.

#209 Chicken and Leek Pie from Wales. This was a really good pie – the stock was very flavoursome and ensured the chicken remained very moist. I’m not sure what the point of the tongue was though. It is also very nice cold – the stock cools to become a nice, rich jelly; though that kind of thing is not to everybody’s taste. Give it a crack! 7/10.
Posted by Neil Buttery at 8:15 PM

Another Welsh aspect of this appetising leek pie I remember well (I was raised in Barry) used rabbit (2nd world war cuisine - chicken was only tasted once a year on Christmas day). Some bread flour featured in the lard/dripping pie crust mixture (butter too scarce) as it added a bit of the toughness necessary for absorbing the juices without disintegrating - yum. Some smoked streaky bacon (forget the tongue) adds a dimension on my palate. This is now on my menu for Friday 8pm with mixed mash of pots and parsnip, braised white cabbage and a bottle of fruity white wine chilled to outside temperature (about 11º here in Spain). Thanks for the appetite.

Slighty jealous of your Spanish life! There is a rabbit pie pretty much as you describe it but i've not made it yet!