I do so love the old, old recipes within English Food. I do so also love anything deep-fried, so I knew I’d like this one. A tricky thing about doing some of the apple receipts in this book is that most of them ask for Cox’s Orange Pippins which are not freely available here in Texas. However, I have found an excellent replacement for those sour and slightly soft little darlings; the Macintosh apple. So from now on any American Grigsoners can do the recipes almost as Jane intended. In fact they are so similar that I think they might have been selectively bred from Cox’s.
Although just a simple recipe to us now, this must have been a pretty expensive dessert to make because of the addition of black pepper and saffron. However, these old recipes don’t exactly reflect what commoners ate in the fifteenth century – the only recipes that were written down were those chefs that could read, and that meant chefs to the King and the like. Commoners couldn’t read or write and so those sorts of recipes are much more difficult to get hold of!
I imagine Richard III probably tucked into these the day before the Battle of Bosworth Field, well actually, Henry Tudor, since he was the one that won the thing…
Peel and core six Orange Pippins and slice them thickly. Place in a bowl with a liqueur glass of brandy and a good sprinkling of sugar. Let them steep for a few hours, making sure they all get turned in the sweet brandy. Meanwhile, make the batter. Start by pouring three tablespoons of nearly-boiling water over a pinch of saffron and let it steep. Measure out four ounces of flour and mix in one whole egg and the yolk of another (save the white for later on) along with a tablespoon of oil or clarified butter. Measure out half a pint of milk and mix around half of that in too. Strain the saffron liquid into the batter and add more milk if it’s too thick along with a three gratings from the black pepper mill. Lastly, whisk the egg whites and fold that into the batter. Dip the apples in the batter and fry in oil until nice and golden brown. Serve it forth with some sugar sprinkled over it. I plopped on some lightly whipped double cream too. 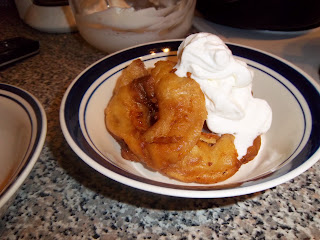 #273 Fifteenth-Century Apple Fritters (Fretoure owt of Lente). These were a great end to the lobster that Danny and I cooked. The dessert was very easy too –good if people are round; you don’t want anything complex. The batter was really nice and light due to the egg white, though I couldn’t really taste the spices. No matter, because it was still a great pud! 7/10.
Posted by Neil Buttery at 1:03 AM

Maybe our modern pepper grinders make the pepper too fine for this recipe?
You might taste it more if it were ground in a pestle and mortar.
Just a thought.

Could be. However three grinds of the mill seems too little as well, non?

Maybe that's down to the changing our tastes in the interim?

That's true - a little probably went a long way with those untrained tastebuds!