#277 Hazelnut Stuffing for Poultry and Lamb

I mentioned in the last post that people don’t make their own gravy anymore, well the same goes for stuffing. I have to admit, I don’t often make stuffing for roast poultry normally, though I have for the blog before. Every time I do, it comes out delicious and is always better than even the poshest pre-made supermarket pap. So I thought I was well overdue making some (which I think is also called dressing in the USA, non..?).
This one, I thought looked interesting – with its earthy hazelnuts and piquant-sweet preserved ginger; just the thing for a climate that is never really wintry. After all, the main reason that I haven’t cooked more food like this in Houston is because it is so bloody hot all the time and I don’t necessarily want roast meats. Anyways, this one seemed good and light and reasonably summery.
Griggers makes a point of highlighting the quality of hazelnut required for the recipe – pre-roasted and chopped hazelnuts are fine, she says, but you really want some slow roasted whole Italian ones from Avellino near Vesuvius, where they have been grown since Roman times. I’ll just pop over and fetch some. I couldn’t get those of course, but I did get Roman ones, so that pretty good I reckon, bearing in mind where I am! 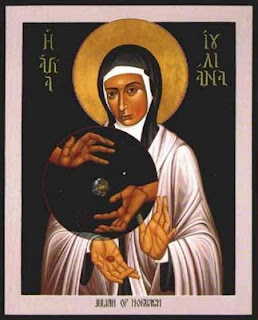 Julian of Norwich with Hazelnut. For some reason.
If you want to be truly old-school, you can use cobnuts, which can still be found growing around the southern counties of England, in particular Kent. FYI: cobnuts were the original nut used in the game of conkers before the horse chestnut was introduced into Britain.
Stuffing is the easiest thing in the world to make. To start chop a large onions and soften it in two ounces of butter – keep it on a medium heat with a lid to prevent to browning. Once cooked, add the following ingredients in the following order: four ounces of fresh breadcrumbs; two ounces of toasted, chopped hazelnuts; four knobs of preserved ginger*, chopped; grated rind of half a lemon; the juice of a lemon; one large beaten egg; salt and pepper; and two tablespoons of chopped parsley. Now you can use the stuffing for whatever you like. If this is for turkey, you may need to double, or even treble the amounts given here.
If you are using it to stuff a bird, make sure you weigh it after it has been stuffed so you can include the extra weight in the cooking time.  Also, it is best to stuff the neck end rather than the cavity, as the stuffing doesn’t go stodgy; just loosen the skin and stuff it in, securing it all by folding the neck skin under the bird. Any left can go into the cavity – but only pack it loosely. 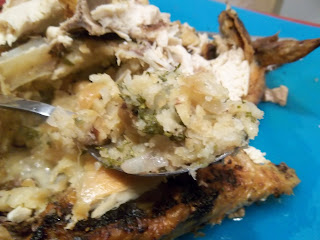 *If you can’t get preserved ginger then use ginger preserve (i.e. ginger jam), or miss it out entirely and replace it with the chopped liver of the bird(s) and a heaped teaspoon of thyme.
#277 Hazelnut Stuffing for Poultry and Lamb. Absolutely delicious and definitely the best stuffing so far in the book! It was sweet and earthy and the nuts had gone wonderfully soft and translucent, giving out their flavours into the rest of the mixture. The lemon and ginger lifted it all very well and stopped it from being too heavy. This is going into my everyday repertoire. 9/10.
Posted by Neil Buttery at 8:28 PM