"A man who is stingy with saffron is capable of seducing his own grandmother.﻿" Norman Douglas, 1848-1952

It goes without saying that saffron is a wee bit pricey. Only three tiny stigmas are plucked from each autumn crocus which means that a pound of saffron strands requires up to 75 000 flowers and can cost up to £2500 per pound in the UK and $5000 per pound in the USA. Lucky for us it is very pungent and is only needed in very small amounts. I bought a small packet for about $10 which I have used in a few dishes already like the Fifteenth Century Apple Fritters and the Coronation Doucet. In days of yore, if you wanted to impress your guests and flash your cash a bit, you couldn’t go far wrong by sprinkling some saffron your pottage or whatever. The long-distance trade in saffron goes all the way back to the second millennium BC at least and there has even been a war over it. It was also thought to cure the black plague. For this recipe it takes centre stage, and so it should, I love the stuff though it wouldn’t necessarily lead me to fisticuffs... 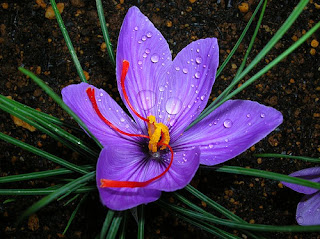 The saffron flower
For some reason saffron isn’t used that often in English cuisine – I only really see it pop up in Asian food and in fishy things like paella. However, it has hung on in the form of this bread from Cornwall. I’d not heard of it myself, but it is interesting in that this recipe predates the invention of raising agents such as baking powder, so to make it light, yeast is used. Because it’s fermented, it appears in the bread section of the book rather than the cake section.
The evening before you want to make the cake (actually cakes, as this recipe makes two) put a generous pinch of saffron strands into a few tablespoons of warm water. It will steep and infuse to make a stunning orange-coloured scented water.
Weigh out two pounds of plain flour and eight ounces of sugar then make the leaven. For the leaven, crumble an ounce of fresh yeast into a small bowl. Pour over a quarter of a pint of warm water along with 2 heaped tablespoons from the flour and a heaped teaspoon from the sugar. Whisk everything together and leave to rise and froth up for around half an hour. Mix the sugar and flour together in a bowl and place it in the warming oven for 10 minutes or so. Remove from the oven and mix in half a teaspoon each of nutmeg and cinnamon and a pinch of salt. Now rub in six ounces each of lard and butter. This is quite easy as the flour is warm.
By now the yeast should be metabolising like a crazy thing, so make a well in the centre of the flour and pour it in alongside the saffron liquid and strands plus half a pint of warmed milk. Using your hands, mix everything together to form a dough. Cover with a damp cloth or cling film and allow to rise and double in bulk. The time this takes depends on the temperature of your kitchen.
Knock-back the dough and mix in 8 ounces of mixed dried fruit and 2 ounces of chopped, candied lemon peel and place in two greased loaf tins. Cover again and allow to prove until they have puffed up. Bake in the oven for 40 minutes at 220°C (425°F). Let them cool for a few minutes before taking them out of the tins and placing them on a wire rack.
Jane doesn’t suggest a way to eat the cake but I ate it with some cream cheese and honey. 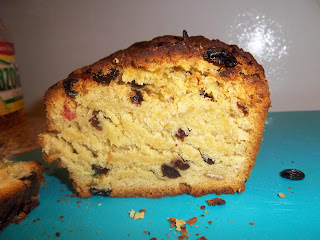 #274 Saffron Cake From Cornwall – this was rather unusual. The cake was leavened with yeast (was that a tautology?) rather than baking powder which made it rather dense; more a cross between a tea loaf and a scone than a cake. I wasn’t sure about it at first, but it grew on me rather. The saffron flavour came through and I thought it gave the cake slightly anaesthetic properties. I expect if you ate enough you could have a root canal without wincing no problem. I brought it into work where it seemed to go down quite well, which is always nice. People scored it quite highly, but I’m a right stingy marker – 5.5/10.
﻿
﻿
Posted by Neil Buttery at 1:50 AM

Sounds good! Get saffron most reasonably at Indian markets! I once heard that the whole thing of fizzing the yeast like that was just to be sure that it hadn't gone bad, and isn't really necessary. Of course, I know you're being authentic, and all...

I didn't know that about the fizzing of the yeast. nearly all bread recipes I have done have that step.... you're the bread expert though Joan!

I quite enjoyed this, raisins and all! I give it a 7.5