"Your old virginity is like one of our French withered pears: it looks ill, it eats dryly." Bertram, As You Like It

What a great quote. Shakespeare was such a bitch.

This is an old, old recipe that Griggers herself has updated rather. In Medieval times a variety of pear called Wardens were used that were rock hard and required an hour’s cooking beforehand. These days, we use eating pears so it’s a lot quicker to make. It is best though to use unripe pears for this, though it doesn’t really matter what kind.
I chose to do this recipe as the dessert to a vegan meal I cooked with my good friends Danny and Eric. I was quite surprised that there was anything vegan in the book! In fact, of the remaining desserts this was the only one.

A some of you may know, one of my gripes is picky eaters. Vegetarianism and veganism don't come under that term ofr me though. I think making a moral stance against eating animals or using the products of animals certainly has a lots of merit. Not eating honey is a bit stupid though. Anyway, what IS annoying is veggies who ARE picky. I mean, what is the point of restricting your diet if you don't like most stuff anyway. Luckily noone fell into that category this night!
It’s an easy recipe that can be done well in advance.
Start by peeling, halving and coring the pears – you will need one per person according to Jane. Pop them in a pan in a single layer and pour over enough red wine to cover them. Add too, two tablespoons of sugar, a cinnamon stick and a good pinch of ground ginger. Cover them and bring to a simmer until they are nice and tender. This takes a good 25 minutes, but the time will depend on the variety and ripeness of the pears used. Remove the pears with a slotted spoon and keep warm whilst you boil down the wine until you get a nice slightly syrupy sauce. Add more sugar if you like. Pour over the pears and allow to cool. No need to serve anything else with them. 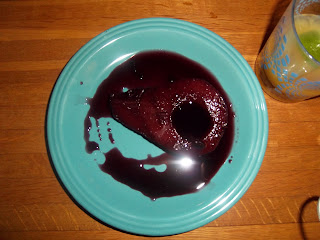 [If you don’t want to use wine, it can be adapted – swap the wine for water and the cinnamon for a split vanilla pod and add one sliced quince for every two pears cooked. Cook the fruit slowly to achieve a honey scented deep red sauce.]
#275 Pears in Syrup. This was a really good dessert. I’d actually put this one off because I expected to dislike it, but was totally wrong. The concentrated red wine sauce wasn’t heavy or sickly like I thought it would be, but light and refreshing. It must have been the pears and the spices that lightened the whole affair. That said, we could only manage half a pear each. The pudding looked quite impressive too with the dark, almost indigo sauce and the creamy-white pear flesh inside. Great stuff. 8/10.
Posted by Neil Buttery at 11:03 PM