#271 How To Boil Crabs, Lobsters, Prawns and Shrimps

A woman should never been seen eating and drinking, unless it be lobster and Champagne, the only true feminine and becoming viands.

A freshly boiled crab or lobster is the most delicious crab or lobster. Apparently. In England, this is not something that commonly happens in a typical household. Like all our meat and fish, the animals that provide us with all that delicious protein are helpfully done away with by burly men in abattoirs, boats or warehouses.  We have lost touch with our food rather and find the idea of killing an animal for food ourselves distasteful. Pretending this doesn’t happen, in my opinion, is the distasteful act.
That said, I am not actually comfortable myself with killing animals, and as any previous reader of the blog will know, killing three eels was most distressing for me. Now it is the turn of some shellfish. This recipe is one that I never did back in England because I simply never saw live crabs and lobsters, prawns or shrimps in fishmongers. Houston, however, is a very different state-of-affairs. There’s live seafood in pretty much any supermarket you walk into here. 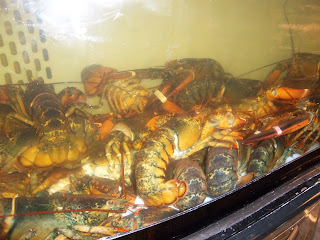 The lobster tank in Central Market, Houston
So if you stumble upon a live crab or lobster in the local fishmonger or supermarket here is what to do. Well, as you’ll find out, it maybe isn’t what you are meant to do….
The main point I wanted to get across is that boiling seafood can be humane (or at least no more or less humane than, say, killing a cow with a stun-gun). In English Food, Jane Grigson says that RSPCA guidelines suggest putting the animal in cold salted water and letting the water heat up – apparently when a certain temperature is reached, the creature expires ‘without suffering’. Guidelines have changed rather and nowadays it’s suggested that the little arthropod is popped into the freezer until it falls into a torpor. When plunged into the water, it’s dead before it has a chance to wake up. (The other method is to stab it in the top of the head using a sharp knife and a mallet.)
So, first things first, my mate Danny (who was helping me out with the cooking) got a lobster from Central Market. On the fishmonger chap fishing out the one we chose, I suddenly felt a pang of guilt, so we hurried to my freezer to get it nice and sleepy. Whilst we waited, the salt water into which it was boiled needed to be prepared. The water needs to be very salty. If you can, use sea water, if not dissolve enough sea salt so that the briny solution will bear an egg (this requires a lot of salt). Bring to the boil.
I was informed that the lobster would take 20 minutes or so to fall asleep. This was total nonsense, because 90 minutes later it was still moving around. Shit. By now we’d had a fair few glasses of wine due to the stress. A little later, the lobster seemed pretty inert, so we decided this was the time. Like, I said before, the idea of this post was to do away with some misconceptions about killing seafood in boiling water. So sure I was of this, I filmed the process, so you get a rare glimpse of me in action! Unfortunately things didn’t quite go to plan, and I may have reinforced those misconceptions. Oh dear.
Next time (if there is a next time) I’ll just throw the thing straight in!
Okay, back to the cooking. The cooking time is 15 minutes simmering for the first pound and then an additional 10 minutes for every extra pound.
For shrimp and prawns: 3 minutes for large prawns and for small shrimps, simply let the water come up to the boil again and they’ll be done.
Serve the shellfish simply, says Griggers, with brown bread, butter and lemon wedges.
#171 How to Boil Crabs, Lobsters, Prawns and Shrimps. Well that was an event! Aside from the auto-dismemberment episode, the cooking itself went very well. I split the lobster lengthways, removed the brown meat and used it to make a butter sauce (see next entry, when I write it!), and grilled the lobster with butter briefly. Delicious. 8.5/10. 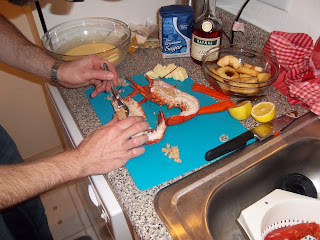 Latent movement my ass. There are probably claw marks inside the door from when it was trying to escape. Obviously it was scratching so hard to escape from its frozen torture that it tore its flesh. : )

Well that makes me feel alot better about the whole affair!