Thank goodness for Britain’s lax laws on immigration, if we were a bit more like Australia we’d have no Eastern Europeans. ‘What does this have to do with the price of fish?’ I hear you ask (at least I would if you’re from Yorkshire). Well, your average Pole has a Christmas feast on Christmas Eve or a massive 12-courser on Christmas Day, either of which involves a baked carp. There’s only one carp recipe in English Food and I assumed, like most of the freshwater fish recipes, I would have to order it in especially, or even learn to fish. (FYI: I intend to learn to fish in 2009; a new skill instead of a resolution.)But what did I spot in the fishmongers in Manchester Arndale Market? Yup, a shed-load of giant carp. Thought I’d better snap one up before Johnny Foreigner gets hold of them all. If you see one, or even catch one, try this recipe; it’s an early Nineteenth Century recipe, apparently, so it’s the kind of thing that George III would’ve eaten, and there was nothing wrong with him!

Choose a carp weighing around 3 pounds and ask the fishmonger to scale, gut and clean the fish* (and cut the head off, if you’re squeamish about these things). When you get home wash the carp in 6 tablespoons of vinegar dissolved in 4 pints of water. (Not sure why, may be to get rid of the slime – several freshwater fish produce slime). Whilst it’s draining, select a baking dish that will fit the fish snugly (to achieve this I unfortunately had to cut the head off). Smear the bottom of the dish with 6 ounces of butter and lay the fish on top. Season with salt and pepper, and add a quarter teaspoon each of mace, nutmeg and cloves, a bouquet garni (I did parsley stalks, bay and some pared lemon rind), a generous teaspoon of anchovy sauce and a chopped onion. Top up with dry white wine, so that the carp is almost covered. Cover with foil and bake at 200ºC for 40 to 50 minutes. 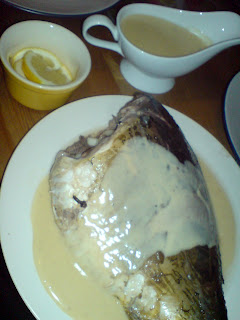 When done, put it on a serving dish and strain the cooking juices into a heavy based pan. Bring to the boil and allow to reduce slightly. Mash 2 ounces of butter with a tablespoon of flour and drop knobs of the mixture gradually whilst whisking to thicken. Once thickened, season with salt and pepper, add a squeeze of lemon juice and a little cream. Pour some sauce over the carp, and serve the rest in a sauceboat.

FYI: If you're concerned as the potential damage to stocks of carp by this sudden increase of demand, the common carp is either farmed these days, or lakes are stocked with them. In fact they are considered a bit of an evasive species, so tuck in ladies and gents.

#99 Baked Carp – 7.5/10. I really liked this dish; I wasn’t really sure what to expect, I’ve not really eaten freshwater fish much (except for salmon, which I don’t like). I was very surprised at it’s subtly fishy and oddly gamey flavour. The very English mace-laced sauce was lovely. If you get the chance to lay your hands on one over Christmas, get it bought, though I’m not sure I’d replace my turkey with it!

*If you are lucky enough to have a fish with roe inside, ask the fishmonger to keep it aside, as you can make a stuffing with it – I didn’t get any, but it’s the look of the draw. Obviously I can’t comment on it’s loveliness, but have a go and tell me about it: Start by softening a small onion in butter. Meanwhile, mix an ounce of breadcrumbs with some milk to turn them to a paste. Mix the onions in along with the chopped roe, a tablespoon of chopped green herbs, a teaspoon of grated lemon rind and ½ teaspoon of anchovy essence. Season with salt, pepper and lemon juice. Stuff the fish with the mixture and sew it up.
Posted by Neil Buttery at 5:32 PM

8/10. this was my first experience of eating carp and it was an enjoyable one. The fish has a meaty flavour to it which one dinner guest remarked 'it has a taste of spam'. The sauce was lovely and one could taste the mace which went very well with the slightly clammy texture of the fish. I only wish butters 1 had a dish big enough to fit the head in!

i didn't really get the spam thing, but apparently that was down to the mace...