Butters and I went for a nice walk around Chorlton Water Park and the Mersey Valley. We lucky in that it wasn’t totally pissing it down with rain, as the weather has not been good of late. It was still pretty chilly though so I wanted to make something simple, nourishing and warming for when we got back. I plumped for the Welsh soup, Cawl (pronounced “cowl”, according to Griggers). Cawl is simply Welsh for soup, but it’s far from a light soup-starter; it’s a meal in one. I assume it’s a peasant dish; it is simple in its ingredients and methods, is cheap, and requires time to make it well. It’s basically the Welsh equivalent of Irish stew or Cock-a-leekie. What I like about this one is that the meat is cooked as a joint and sliced at the end and served with the vegetables and soup. To be really Welsh, marigold flowers can be added as a garnish, but I thought that was going a bit too far…

These measures make loads of Cawl – enough for 6 to 8 people.

Start off by browning your meat in some beef dripping; you need pounds altogether, either beef brisket of shin of beef, but best is to use one pound of beef and a pound of smoked hock, gammon or bacon. I went for brisket and a giant piece of smoked bacon. When browned, put in a large saucepan or stockpot. Next, brown 2 sliced onions and 3 carrots, parsnip, turnips or some swede cut into chunks; a mixture is best. Once they are browned, add them to the meat and cover with cold water, add salt and two stalks of chopped celery. Bring to the boil slowly, skimming off any scum that may rise to the surface. Add a bouquet garni (I used parsley, thyme and bay), sea salt and pepper to season, turn to a very low heat and simmer for at least three hours. I actually did all this the day before, so that we didn’t have to wait very long to eat when we got back. 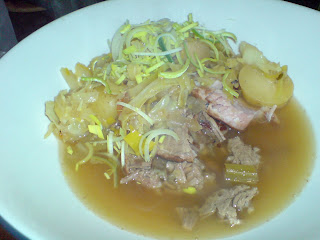 About half an hour before you want to eat, add a pound of small potatoes (or larger ones cut up), and ten minutes before add a small white or green cabbage that has been sliced. When the potatoes are cooked the soup is ready. Finely slice 2 or 3 leeks and sprinkle them on top of the soup; the heat of the soup will cook them. Remove the joints and slice them up, putting some of each kind in each bowl, along with some of the veg and stock.

#98 Cawl – 7/10. A delicious, warming and beautifully clear soup. The meat was falling apart and the smoked bacon gave the whole thing a really delicious flavour. Definitely one of the best soups so far. This will become a staple winter dish, I think.
Posted by Neil Buttery at 11:25 AM

8/10. I really enjoyed this after the chilly winter ramble. Very tasty and warms the soul, the smoked bacon chunks were very tasty to say the least. I would highly recommend this to anyone after some soul food on these dark chilly evenings.