Kidney Soup was apparently a kitchen standby in households of times past – particularly in Scotland. Indeed, this recipe is taken from Florence B. Jack’s book Cookery for Every Household. Ms Jack was the principal of the Edinburgh School of Domestic Arts, and very austere she was too.

Now I know it sounds weird, but this is a classic recipe that is also cheap – cheap because it’s main ingredient is kidney, of course. We are being told that offal and the cheaper cuts of meats are suddenly becoming popular due to the recession, but I have not seen any evidence of really from the people that I speak to (though I have in butcher's shop windows). When saying I’ve been doing this recipe, there has been nothing but pulled faces and dry retching (the only exception being Anthea – frequent blog commenter – she ate it often as a child). I must admit, however, that as much as I love kidneys, I wasn’t quite sure about eating them in soup. However, this book is full of surprises.

To start with you need a whole ox kidney; cut away any fat and gristly bits and cut up the kidney into small pieces. Brown it in an ounce and a half of butter or dripping in a large saucepan along with a sliced onion. Pour over four pints of beef stock and stir, adding some salt. Bring the stock to a boil and skim any scum that rises to the top. Add a bouquet garni and some spices: 20 peppercorns, a blade of mace and a quarter teaspoon of celery seeds. Tie the bouquet and spices in a piece of muslin first. Simmer for 3 to 4 hours, covered on the hob or in the oven.

When ready, skim any fat from the surface and strain the soup. As with most soups and stews its best let it cool down completely – overnight is best – so that you be sure of getting rid of all the fat. Pick out the bits of kidney and give them a rinse. Heat up the soup again and add an ounce of flour that has first been slaked in a tablespoon of mushroom ketchup. (The recipe doesn’t actually say what kind of ketchup, but with this being beef, mushroom or tomato are the best to use.) let the soup thicken slightly and add the kidney pieces. Finally season with more salt and pepper if required, plus some lemon or orange juice and a dash of sherry to add complexity of the flavour.

FYI: the kidneys were thought to be the part of the body concerned with conscience and reflection. Apparently, God would inspect the kidneys to see how good someone had been. In fact, one kidney was responsible for good thoughts, the other evil. The Latin word renes, is used to describe anything of the kidney (e.g. renal), but also is the root word for reins too. So there you go; a choice nugget of factoid for you there. 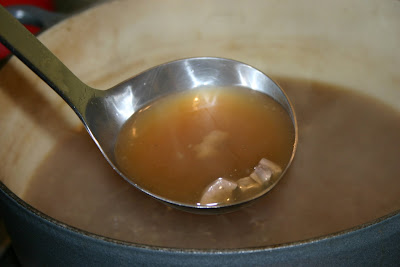 #193 Kidney Soup. This was a really delicious soup! I loved it the slightly spiced beef consommé was light and tasty and complimented the strong metallic gamey taste of the kidneys. It requires a bit for forethought to make it, but it is worth it I reckon. Cheap, tasty and good for you. 6.5/10.
Posted by Neil Buttery at 7:03 PM

thanks for assaying this, sounds lush.

It was a good one. I've always been an offal fan, but this book is really showing off the best of generally ignored, and therefore wasted,food.