In days of yore, we English loved potted meats and fish. You don’t seem to see many potted foodstuffs around these days: though potted beef is still popular in Yorkshire. Pate does not count. This one at first sight seems a bit weird, and perhaps foul, but there are some interesting ingredients in there. One of the great things that Elizabeth David did in the sixties and seventies was introducing us to Mediterranean flavours, and she managed to sneak a few in here: olive oil instead of butter, basil instead of parsley, lime rather than lemon. She transformed our eating habits; along with Grigson, Floyd, et al. of course. It may seem odd these days – all those continental ingredients mashed up in a now-defunct method of preparing meat and fish – but there you go.

Place eight ounces of cooked, peeled prawns in a blender along with the juice of a lime and around six tablespoons of olive oil – use extra virgin if you have it since as it’s not going to be cooked. Blend until smooth and add half a teaspoon of dried basil and a heaped saltspoon (!) of crushed coriander seeds. Season with a little salt and some Cayenne pepper. Divide between some small ramekins, cover and refrigerate. Serve with hot, thin toast.

By the way, I don’t know the capacity of a saltspoon as I don’t own one, so don’t ask me. Actually, I’d not even heard of one. I guessed and added a quarter of a teaspoon. Also, don’t buy dried basil, as it has no flavour; dry your own in a cool oven for about 20 minutes until crumbly: much better. 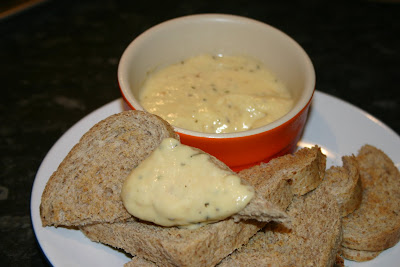 #192 Elizabeth David’s Prawn Paste. It may have sounded like horrible soggy fish pap, but this was delicious. The prawns were sweet, the olive oil was fruity and the basil and coriander seeds combined with the lime juice provided a morish tang. Really good – go and make some. 7.5/10.
Posted by Neil Buttery at 5:28 PM

Neil, greetings from Brooklyn. Your blog is great..I was so excited to discover it. I have my dog-eared paperback of English Food from the early 80's,& there are still plenty of recipes I haven't got around to trying yet. You're inspiring me to do so. I have a good number of cooking books at this point,but Grigson & Elizabeth David are really my culinary heroines. I need to go back through your older posts & check out what you've made so far. Would love to compare notes from time to time. This is so much more up my street than the Julia/Julie thing, & is quite a comfort to the English citizen abroad. Bravo!

Cheers for the compliments. Obviously being English, I have no ability to know how to take them.

I'm glad you're enjoying the blog - I'm always surprised by these sorts of posts, not being a writer and all.

Lemme know about anything you cook