A rather upmarket version of that Northern English speciality, mushy peas. There is an infamous incident of the MP (now Lord!) Peter Mandelson visiting his constituency canvassing for votes, where he walked into a fish and chip shop and asked for 'some of that guacamole'. The ponce. Unfortunately, after a little research, I found on the website of that evil news rag, The Daily Mail, that it is in fact a myth and it ever happened. Shame. But why should the truth get in the way of a good story, eh? 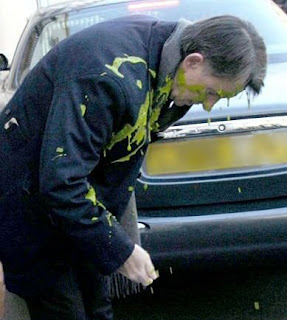 Peter Mandelson getting hit by what appears to be a purée of dried peas
The pea has been popular in Europe for donkeys years – settlements in France dating back to the third millennium BC have been discovered with the remains of pea pods. Dried peas, go back to Roman times; in fact, they were preferred over fresh. Also, luckily for us, the pea became a very common garden vegetable, and Gregor Mendel, the garden-loving Austrian monk, spotted patterns in the variation between pea plants he was breeding and came up with the first theory of genetics. He wasn't recognised during his lifetime. So often is the way. 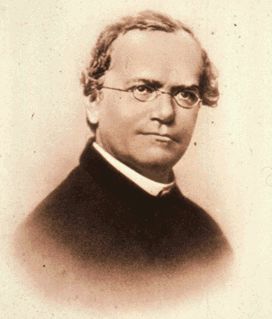 Gregor Mendel, Father of Genetics and pea-fancier
This recipe isn't really to go with your fish and chips (though omit the peppercorns and it will be perfect), it is to go with duck and pork. I took this as an excuse to get a nice rib roasting joint from Harrison Hog Farms, a great farm here in Houston that really looks after its very English-looking pig breeds. So if you go to a Houston farmer's market andyou spot them, give them a try as their pork is excellent.

What makes this recipe posh is the pickled green peppercorns. They're not something that you'll find in the supermarket, but they're pretty easy to get hold of in delicatessens.

Right then, to make this purée, put a pound of dried split peas in a large saucepan along with a chopped carrot and a chopped onion plus a bouquet garni (I went for parsley, bay leaves, sage leaves, thyme and rosemary in mine). Cover well with water, bring to a boil and cover and simmer until cooked – around 45 minutes. On no account add salt, it makes the peas hard and they won't cook. This is speaking from personal experience. Fish out the bouquet garni and pass the peas through a mouli-legumes in a bowl (you can use a potato-masher if you want but a blender would make it far too smooth). 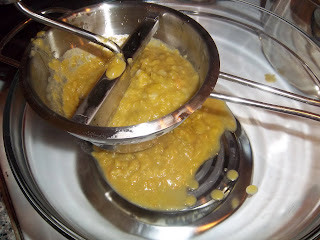 Now stir in a large knob of butter and season well with salt (at least a teaspoon) and some sugar. Lastly, mix in a tablespoon of pickled green peppercorns as well as one to two teaspoons of the juice from the can. Easy. 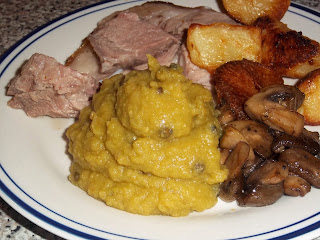 #295 Purée of Dried Peas with Green Peppercorns. This one of the best recipes from the Vegetables chapter of the book. Really delicious and much better than the bought mushy peas you find in cans, and – dare I say it – the chippy! The addition of the bouquet garni and the simple stock veg really lifted it, and the pickled peppercorns were great, little exploding pods of subtle spiciness that transformed a vegetable side dish into the main event. 9/10.
Posted by Neil Buttery at 2:05 AM

A Maize-ing
A new light on plant genetics according to a book I'm reading -
'1491: New Revelations of the Americas before Columbus' by Charles C. Mann.
Quote:
'Indians took the first steps towards modern maize in southern Mexico, probably in the highlands, more than six thousand years ago. Both (two geneticists from Rutgers University, New Jersey, 1998) argue that modern maize was the outcome of a bold act of conscious biological manipulation - ". . . arguably man's first, and perhaps greatest, feat of genetic engineering" Nina V. Federoff, a geneticist at Pennsylvania State University, wrote in 2003. Federoff's description, which appeared in 'Science' intrigued me (says Charles C. Mann) 'It makes twenty-first century scientists sound like pikers' I said when I contacted her. "That's right" she said "To get corn out of teosinite is so . . . you couldn't get a grant to do that now because it would sound so crazy . . ." Unquote.

For me, Neil, maize in the form of corn-on-the-cob is the only food item that must be enjoyed in silence - to attempt conversation is not only difficult with a cob in the gob but highly disrespectful to one of the golden wonders of the table. It has all the qualities of a hundred summer suns - hot, shining and glowing yellow. I wonder if Griggers mentions it?

There is not a single mention of corn-on-the-cob in English Food at all. Perhaps she considered it far too American and not really part of our food culture in the 1970s.

I have to agree though. I do love it