Around fifteen minutes after deciding to cook all the recipes in English Food, I had a first proper look through the good book. It was then I realised that some of the recipes were pretty bizarre, and this one stood out; I had not eaten tongue then, but now I have done a couple of tongue-based recipes so I wasn’t squeamish. Though a tongue crumble is still a bit weird. I made this and took it round to a small gathering of friends to try. There were mixed attitudes…

There’s not much of an introduction to this recipe – Griggers says nothing about it in the book and after an internet search, I was also none the wiser. Recipes did crop up, but there was, alas, no background or history to it. Here’s a nice painting with an ox tongue in it though: 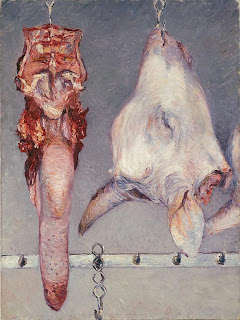 Calf's Head and Ox Tongue by Gastave Caillebotte, 1882
To make the dish, you need to start with pickled tongue weighing around 3 ½ pounds – you can use any tongue you like: ox, calf or pig (I went with ox). You can pickle them yourself (look here for a post that fills you in on this) or get them pre-brined by the butcher. The tongues should be just lightly brined, so if you are doing your own, just leave them in the brine for a day or two. If it’s from the butcher’s shop, you’d be best to soak the tongue(s) overnight in cold water as they may have been in his brine crock for quite a while.

Place the tongue(s) in a stockpot along with a chopped onion and carrot, a bouquet garni and half a pint of dry cider. Top up with water to just cover. Bring slowly to the boil, skim if you need to, and simmer very gently until cooked – this could be one hour for pig, 90 minutes to two hours for calf and three hours for ox. You can tell a tongue is ready if a skewer goes in without much resistance. Don’t worry if you cook it too long, as long as the water was barely simmering, the tongue will still be moist, this because tongue is a fatty meat, around 70% fat in fact. 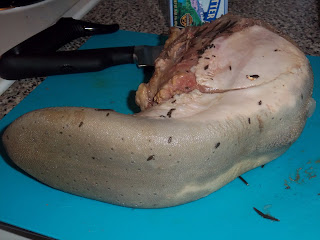 Take the tongue out of the pot, but keep the stock, let the tongue cool slightly so you can peel the skin off and cut away the sinew from the blunt end. There are some quite large blood vessels and sinew running along the underside of a tongue, so turn it over and cut that away too. 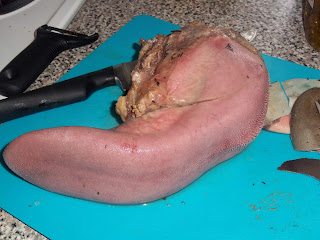 Now slice the tongue, removing any more gristle as you go – there is none as you approach half way. Arrange the tongue on the bottom of a buttered ovenproof dish. Next cook down 4 ounces of sliced mushrooms in one ounce of butter and scatter them over the tongue. Whilst they are cooking, finely chop a medium onion and cook it gently in two ounces of butter – cover the pan so it doesn’t brown. Once softened, stir in a rounded dessertspoon on plain flour and let it cook for a couple of minutes. Whisk in 6 tablespoons of dry white wine. It will instantly thicken. Thin it out with some of the stock until you have a sauce the consistency of thin gravy. Cook for a few minutes, adding more stock should the sauce become too thick, season and pour it over the tongue and mushrooms.

Next, make the topping by making some fresh white breadcrumbs using a blender. Griggers says to use 1 ½ ounces of bread, but you may need more. Sprinkle this over the tongue and sauce and bake in an oven preheated to 190°C (375°F) until all is bubbling. Because everything has been cooked already, it is just a heat-through that’s required, so it can all be made in advance. 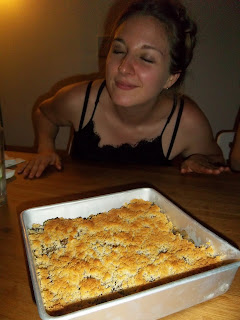 Hannah gets a good lungful of tongue.
That sounded less gross in my brain than when read out loud.
#296 Tongue and Mushroom Crumble. Like most of the weird recipes in the book, this savoury crumble was pretty good. The corned tongue was very tender indeed and well flavoured too, and the mushroom lent an earthiness that always goes well with anything beefy. Much, much better than I expected 6.5/10. 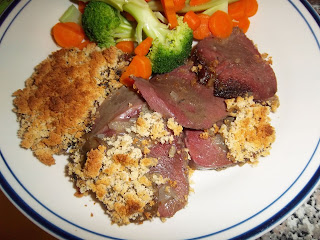