The tale of this pie is of personal pain and anguish. Let me tell you the tale…

It was my work-buddy Chandra's PhD thesis defence yesterday and she requested that I made this pie rather a cake for when she came out. Great stuff, thought I, any excuse to make something out of the book, plus the raspberry is my favourite fruit so it has got to be a winner. This pie is an eighteenth century pie and requires the fruit to be cooked in the pastry casing and then in the last five minutes, a custard to be poured in through the hole in the pastry. This was the usual way to make a fruity pie in those days, apparently. Anyway, Griggers says to serve it hot or warm, so I nipped back to my apartment to make it. I popped the pie into the oven and got the custard – or caudle as it was called then – ready.

Unfortunately the raspberries were so juicy that there was no room for any caudle, so I ran over the road and bought some straws from the shop with the inspired idea that I would suck the spare juice out. Hoping the pie had cooled slightly I attempted to suck some out – I think because time was becoming an issue I didn't notice the fact that this was 170°C fruit syrup too much, but then as I realized just how much syrup there was, my nervous system kicked in. Cue much wincing and swearing. After about 15 minutes of this, I had finally cleared enough space to pour the caudle in. Mouth pretty sore, but not major damage done. Popped the pie back in the over for its final five minutes and rushed it back to Rice University. It was only whilst driving down towards work that I noticed the skin of the roof of mouth sloughing off and dangling upon my red raw tongue. She had better bloody like this pie. Luckily it went down well. On returning home later that evening, I rinsed my mouth out with Listerine before bed. More agony. Then, in the morning, I thought I would clean my tongue as well as my teeth as it was burnt and may have had some nasty bacteria there trying to infect the poor thing. Bad idea. I left for work with bleeding tongue. Hopefully it won't go gangrenous and I won't have to have my face removed.

To make the pie, you need to start with the pastry. In the eighteenth century, puff pastry will have been used, but Griggers goes for the sweet rich shortcrust and gives an ingredients list for it. Sieve 12 ounces of plain flour along with 2 tablespoons of icing sugar and a pinch of salt into a large bowl. Next, add 8 ounces of cubed butter or a combination of butter and lard. Use a mixer or food processor, to rub the butter into the flour. If you like to keep it real, use your hands or one of those pastry cutters as I did. The important thing is to keep everything as cold as possible – use butter straight out of the fridge and turn that A/C as low as you can! Once the butter is rubbed in, add an egg yolk (keep the white) and two or three tablespoons of ice-cold water, enough to bring everything to a dough. Don't worry if you add too much, you can add some more flour. Knead the dough briefly and then pop it in the fridge to rest and firm up again.

Preheat your oven to 190°C (425°F) and place a baking sheet on one of the shelves. Now roll out two-thirds of your dough and line your pie dish with it. If it is warm in the kitchen, roll it out on some cling film, this will stop it from breaking up. A top tip for you there. The dish needs to be 2 to 3 inches deep, Griggers doesn't mention a diameter, but I went with an eight inch diameter one. Now arrange a pound of raspberries in a layer in the pie and sprinkle over 4 ounces of sugar (or less, if the raspberries are particularly sweet). 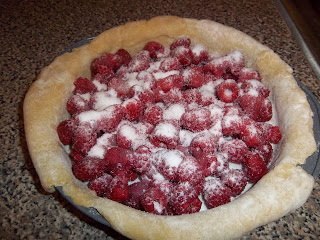 Roll out the remainder of the pastry to form a lid, gluing it on with a brushing of the reserved egg white. Trim the edges and decorate if you wish – I went with a mortar board motif, seeing as it was a PhD defence. Brush with more egg white and sprinkle with sugar. Make sure you leave a good-sized hole in the centre. Place in the oven on the hot baking tray and bake for 15 minutes before turning down the heat to 190°C (375°F). The point of the hot baking tray is so that the pastry bottom crisps up before the raspberries give up their juice, preventing a soggy pastry bottom to the pie. The pie should be cooked until the pastry is nicely browned and crisp, around 40 minutes.

Whilst it is cooking, prepare the caudle: bring 4 fluid ounces of single and 4 of double cream to a boil in a saucepan. As soon as boiling point is reached pour them over two egg yolks, whisking vigorously to prevent making scrambled eggs. In the final 5 minutes of cooking, take the pie out of the oven and slowly pour the caudle into the pie using a funnel and return to the oven so the caudle can thicken. Serve hot or warm. Oh, she makes it sound so easy. Looking back, it would have been better to pile the raspberries in the middle slightly so when it collapsed there would have been some space for the caudle. It was also suggested that instead of using a straw, I should have used a baster or a pipette or something. Retrospect is a wonderful thing. 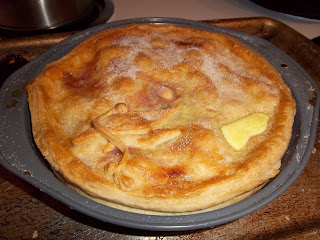 #297 Raspberry Pie. Ah, the raspberry. There is nothing better than stumbling across some wild raspberries when walking in the woods. The pie itself was reminiscent of the French clafoutis, where fruit is cooked in custard in a pastry case, though without the lid. I love raspberries, I love custard and I love pastry, so this could not have been a disappointment. I have to say it was delicious, even though I my taste-buds were not working at their best at the time. The caudle had thickened up and mixed with the juice, and it wasn't overly sweet either. Jane says that you can use any soft fruit for this pie – gooseberries work particularly well apparently – so I shall be definitely this again whenever there is a glut of soft fruits. Though without the second-degree burns this time. 8.5/10.
Posted by Neil Buttery at 8:26 PM

It was delicious! Can you interpret single and double cream for Americans, please?

Ah yes, of course: single cream is called 'light cream' in the US amd double is 'heavy whipping cream'. You could proably just use whipping cream for this, but I had to follow the recipe as written!