I’ve been rather busy of late and not had much time for cooking or blogging. Oh well, we all have fallow periods. It seems like ages ago that I did the dinner party that was just a couple of weeks ago and I’ve only just gotten round to telling you about the dessert.

I wanted to do something that I could make ahead and was seasonal too. This pear compote was the obvious choice. A nice clean tart fruit after all that cream and fried bread from the previous courses. I was concerned that I wasn’t going to find any Bonchrétien pears though – I’d never heard of them. I turns out the Bon Chrétien (which translate as ‘good Christian’) pears are a type of Williams pear, the most common of the pears.

This recipe is another from Hannah Glasse, a book called The Complete Confectioner, published in 1790 – there are no specific weights and cooking times really, which is a good thing as there is a huge variation in sweetness and folks’ tastes too. Do buy good pears for this though; don’t worry if they are under-ripe. 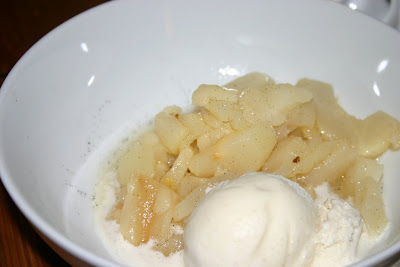 Peel, core and slice your pears. Plunge them into a pan half-full with boiling water that has been acidulated with lemon juice. Bring to the boil and simmer for two minutes before draining and returning to the pan. If your pears are particularly hard, they may need a little more time; if they are soft, I probably wouldn’t simmer them at all. Gently stew the fruit with some sugar to taste for a few minutes, either over the hob or in the oven. Make sure the pan is covered well. To add extra flavour and interest add some pared lemon peel or a split vanilla pod (I went with the latter). Once tender, remove from the heat, squeeze some orange juice over the pears and leave to cool, covered. Griggers or Glasse make no suggestions for accompaniments, so I went with vanilla ice cream.

#198 Compote of Bonchrétien Pears. I don’t cook with pears very often and this is first time I’ve made a compote from them. They were are very good end to a rich meal, and the vanilla made them extra-delicious. I think that we should all swap our apples for pears whenever we think about making a crumble or pie this autumn or winter. 8/10
Posted by Neil Buttery at 5:24 PM

Really simple dish but really lovely. After some pretty heavy courses previously, this was exactly what was needed. I thoroughly reccomend following this menu from the liver salad to the pears.

Yup, 8.5/10 for me too!
The perfect end to the meal - a bit tart & refreshing but the vanilla made it comforting as well. Yummy!
XX

This was really yummy, light and refreshing after all that went before. I can't remember what score I said on the night, but I think an 8/10 is in order.
Char x

My stomach screams 'savoury!' when pretty psshed, as i probably was after 3 courses! So while I maybe couldnt appreciate the tastes, it definitely did the job of gettiing rid of the cream-coating in me gob. So 5/10