...Next, Simply Prepare Your Eels

So how do you kill and prepare an eel? Well, if you look in English Food, Griggers just says to ask your fishmonger to do the dirty work. The was not to be the case for me, for two main reasons: my fishmonger (and pretty much any fishmonger in the country, I hasten to add) had never dealt with them at all. Remember: fishmongers do not receive live fish, apart from the odd lobster or crab perhaps, so this was just as out of his comfort zone as mine. The second reason was that I felt it part of my duty as a meat-eater to do this. Every animal we have eaten has had to be killed. These days, however, the consumer hardly ever does this themselves. We are too far removed from our food these days and therefore disrespectful of it so some degree. This is a way of addressing this issue for me. I did not expect to find it easy. In fact I was very nervous; I had never killed anything in my life and I was not looking forward to it. I didn’t want it to be easy; I wanted it to be distressing (for me, not the eels). We take all this animal killing in our stride. 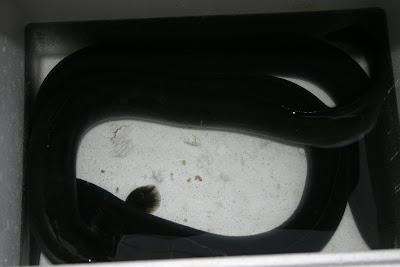 The eels await their fate in their little polystyrene prison

I have gone off on a tangent. Larousse Gastronomique gives you these instructions on how to prepare an eel. It sounded all so easy:

I added the “simply”s. Well it didn’t quite go like the description in Larousse. So here’s what we ended up doing:

First up, you need to have a couple of rums to help prepare you. That’s what Paul and I did and I think it helped. We fannied around a bit before Charlotte walked in from work, grabbed one in a cloth and gave it several massive thwacks again the wall. Job a good one? No. It was still alive! She gave it another couple and it went limp. This was not like killing a trout with a short, sharp crack on a stone. We felt quite distressed about the several hits that we had to give it to kill it – we didn’t want to cause any unnecessary suffering. So the new plan was to hit it once to knock the others out or slow them down, and then chop the heads off with a meat-cleaver. I know this might sound extreme but, it seemed like the best thing – plus I remember it being the method I remember seeing some chef doing on telly once. We did it, and guess what? They were still moving about! I took the two now headless eels to the, plus Charlotte’s to the skin to rinse, and revived Charlotte’s. Off with its head.

Before you get angry about any mistreatment here – it turns out that they were all dead quite early on. We worked this out because all three eel bodies were still seemingly happily snaking around in the sink a good 45 minutes post-beheading. It seems that much of their behaviour is down to instinct and their autonomic nervous system. Though I've no idea how this happens and why it's so different to other fishes. Below is the rather gruesome video of the headless eels I took when they were in the sink. I mentioned the whole episode to Matthew Cobb (who I work with at Manchester University) who said he'll put a link to this post on his z-letter. (FYI: The z-letter is weekly newsletter about all things zoological.) Hopefully I shall find out why they just don't conk out. Be warned before clicking on the video if you are squeamish, remember too though that they are dead. Also, I apologise for my rather camp commentary. Let me know if you can tell me anything about eels and their habit of moving and swimming long after death.

The next stage of preparation is to skin them. In our panic, thinking we hadn’t killed eels when we had, we cut off the heads so couldn’t do the noose trick outlined in Larousse. Instead, we tried to make slit down the base and peel the skin away some other way. Anthea had arrived by this point, to find us sweating, giggling and holding bloody carving knives, and she suggested using some salt as it would give grip against their very slimy skins. At first all this seemed to do was kick-start the wriggle reflex again, but eventually – with Anthea restraining the wriggling eel with yet more cloths – I managed to get a purchase on the eel and pull the skin off in one piece. Just two more to go.

The hard work was done, just the gutting to do. At last I was on familiar territory. I’ve gutted fish several times before. To do this, make a cut from its anus – you’ll see it, about halfway down – to the neck end and pull away any innards away from the rib cage. Give it a rinse and you are done.

Well I have to say it was a pretty distressing episode, it wasn’t as bad as we thought at the time. I now know that eels carry on a-moving quite a while after death. So, to sum up:

1. Holding a cloth, hit your eel several times very hard against a wall.
2. Whilst the eel is limp, quickly cut off its head with a cleaver or very sharp knife.
3. Using salt as an abrasive, pull the skin back – persevere here – until you have a good inch of skin eked away, then pull off like a big macabre witch stocking.
4. Gut and wash the eel.

It sounds so easy put into four sentences.

Paul here. I'm still thoroughly scarred by the blood, murder and rearing up of headless eels hours afterwards. As a carnivore, I feel I've acheived something though.

Yes indeed - i know what you mean. Going to add the video to the link in fact. Macabre though it is.

Good work Barbudos. I stood next to Lucia, the lady of the family who I stay with in the countryside, while she killed a hen. She located a big vein in it's neck, cut it and left it hanging upside-down for the blood to drain. The hen wriggled for several minutes before quietly flopping out of this world and being turned into soup. I hope to do the honours next time. I missed a pig and a goat killing in the last month, sadly or fortunately, depending on your point of view, both apparently by blood draining (rather than battering them against a wall).

The sight of Neil, Paul & Charlotte spattered with blood & a bit hysterical will stay with me for a looooong time :-) So will that bloody headless eel rearing up from the board when we salted it....
XX

Wall thwacking, blood and cleavers. Some strange therapy, but a great way to leave behind any thoughts of your working week.
Thanks for the opportunity, Mr B.
C x