The second of the classics I’m trying to work through. Spoilt for choice for the next one. Thinking maybe a Lancashire Hotpot. Any suggestions, let me know. Anyways, my old mate Paddy was staying over, and he asked for a Shepherd’s Pie, and a Shepherd’s Pie, he got. According to Grigson, you can use either lamb or beef – I always thought that a Shepherd’s Pie contained lamb and a Cottage Pie had beef. We went for beef on Paddy’s request, as it’s the least fatty. One ingredient I found though – white wine. Never heard of that in a Shepherd’s pie, and I must admit I had reservations.

Chop a large onion and three cloves of garlic and stew them until soft in 3 tablespoons of oil. Raise the heat under the hob and add a pound of minced beef (or lamb), stir until browned. Next add a tablespoon of tomato puree, a ¼ of a pint of white wine, and ¼ of a pint of beef stock, keeping a few tablespoons in reserve. Slake 3 heaped teaspoons of cornflour in the reserved stock and add this to the beef. Season well with salt, and very well with pepper. I don’t understand it when people say that they don’t add salt when they’re cooking; it just all tastes so bland. Plus I don’t add anywhere near as must as the pre-made supermarket meals. Rant over. Simmer this for about 10 minutes and spoon off any surplus fat. Whilst simmering, boil 2 to 2 ½ pounds of potatoes (Grigson says boil them in their skins, but I skim-read the recipe and didn’t spot that sentence and peeled mine). Mash the spuds with 3 ounces of butter and up to ½ pint of milk (depending upon how sloppy you like it). Season the potato well too, readers. Pour the meat into a casserole dish and pile on the potatoes. Run a fork through the top so as to add texture to the spuds and so they crisp up nicely. Sprinkle over an ounce of grated Cheddar and a tablespoon of grated Parmesan. Bake for 10 minutes at 200ºC, and then turn the oven down to 180ºC and bake for a further 45 minutes. 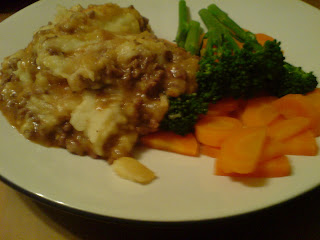 #84 Shepherd’s Pie 8.5/10. The secret ingredient of a Shepherd’s Pie, it seems, is white wine. It enriches the whole thing without making it too rich, as red wine would do. It’s a bit frivolous, I know, but you could swap the wine for more stock if you liked.

Is Jane deliberately trying to be confusing?

I think so! Glad I wasn't wrong about that - thought I'd perhaps dreamt it!

was very nice, not too rice but very 'flavourfull' (is that a word?) the white wine really made a difference, i've started adding it in other mince based (instead of red wine)dishes and it really works!!
Great brocolli, carrots were awful, but then again i hate all carrotts!!