I wanted to do a quick and easy dessert for when Paddy came round and didn’t really have time for baking or anything requiring too much time or effort, being the busy bee that I am. (#85) Caramelised Cox’s Orange Pippins fit the bill perfectly; a hot dessert that can be made in 5 minutes. That’s what we like.

I love Cox’s Orange Pippins; they’re my second favourite apple after the russet. You can’t beat an English apple in autumn. I don’t really buy them the rest of the year when they’re not in season and all you can buy are shipped over from France or whatever. I think they’ve had a resurgence over the last couple of years as I’ve spotted both varieties in supermarkets. If you can’t get hold of Cox’s Orange Pippins, I suppose you could use any eating apple, but these are the best eaters for cooking with. 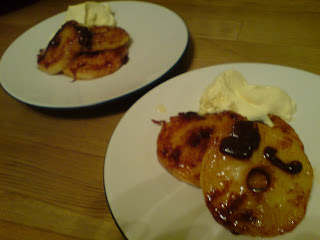 Peel and core one apple per person top and tail them and cut into three thickish rounds. Fry the apples on a low to medium heat in butter until they start picking up a faint golden colour. Whilst that’s happening make some cinnamon sugar; one tablespoon of sugar to one teaspoon of cinnamon. I found that this was enough for two apples, but you put on whatever amount you like. When the apples are ready, sprinkle over the sugar. Keep the apples turning over every 30 seconds or so and you should magically end up with a nice sweet glaze covering them. It’s important not to have the heat too high, so be careful. Serve them immediately with a dollop of clotted cream. Piece of piss!