Parsnips don’t seem to be that popular in America, at least compared to Britain. In the USA, carrots and sweet potatoes are much more favoured as a sweet-starchy vegetable. In Europe, parsnips have been cultivated since Roman times, and although in the UK, the wild parsnip is quite a common plant, it has rather pathetic roots,and isn’t worthwhile eating. The parsnips eaten in Britain are therefore not indigenous. They were probably brought over around AD55 during the Roman invasion. The Romans used parsnips in desserts because of their sweet and chestnutty flavour, weirdly, parsnips are used in a cake in English Food that is based upon the recipe for an American carrot cake. Ah, the circle of life. 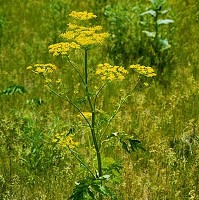 The European wild parsnip﻿
Creamed parsnips can be served alongside some roast meat, or on their own with toast or in pastry cases as a supper dish, says Griggers. I had them for supper.
Peel, top, tail and quarter a pound and-a-half of parsnips. Remove any woody parts, if the parsnips are large and cut them into batons. Plunge them into boiling, salted water and allow to cook until tender – between five and ten minutes, depending upon the size of you batons. Drain and return to the heat. Stir in a quarter of a pint of double cream (or half-and half double and single). Heat through, season with salt and pepper and stir in some finely chopped parsley. Serve hot. 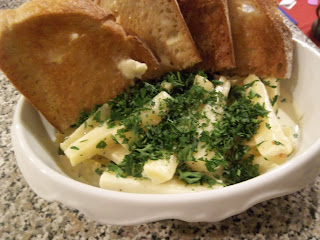 #285 Creamed Parsnips. Ah the simple things are the best, innit? These were delicious and not at all heavy – the parsley lifted the whole thing, preventing the dish becoming sickly. The creamy sauce and the carby parsnips themselves made the supper feel quite substantial. A hidden, simple gem. 8/10.
﻿
Posted by Neil Buttery at 1:45 AM

Ah! one can but agree. Wonderful with lamb and onion sauce. They are even in the markets here in Andalucia. Their Spanish name is 'chirivias' (chirryvee-as)which sits as sweet on the tongue.

as always, eric, a great comment. i love parsnips and there's only one more recipe left to do that uses them. I might just save it for some lamb!