Contrary to what you may think; I am not a big meat eater – I’m just not picky! However, I’ve been having a hankering for meat recently, not sure why. Anyways, at the butcher, I spotted some venison sausages that looked very fine indeed so I bought them. They turned out to be from Lyme Park not too far away from me in the Peak District, so the old food miles were happily reduced. Venison sausages are available pretty much anywhere, but a word of warning people – venison from supermarkets probably won’t be British. Supermarket venison usually comes from big deer farms in New Zealand. It’s not bad meat; it’s just flown a long way! Buy yours from your local butcher to get local venison.

This is what the Lady Grigson says to do with your venison sausages:

Fry them in lard or oil very quickly so that they develop nice dark stripes and arrange them closely in a shallow oven dish. Pour in enough red wine to come half-way up the sausages and season them. Bake in a hot oven – 200°C – for 15 minutes. Serve them with mashed potato and some seasonal greens – she says Brussels sprouts and chestnuts, but as it’s Maytime, I plumped for green beans. Pour a little of seasoned wine over the sausages if you like. 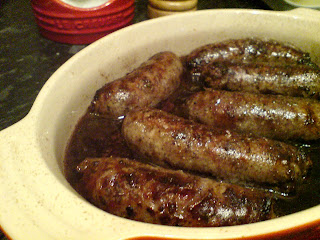 #148 Venison Sausages – 7/10. A great way to cook special sausages of any kind I reckon. I’m not giving an excellent score because the venison sausages were good, but not the best ones I’ve ever had. However, the red wine did improve the flavour a lot. The most important thing was that it scratched my red meat itch. The best thing about the whole thing was the fried mashed potato sandwiches I made the morning after. You must try it – fry patties of left-over mash in lard until a crispy crust develops, turn them over and put them in a buttie with brown sauce.
Posted by Neil Buttery at 2:53 PM