Does anyone know if Britain has had an asparagus shortage this year? I’ve looked high and low for days and not found any from the UK, most are from Peru and the nearest were from Catalan. Then, I happened upon some in Asda of all places. I love asparagus, but refuse to eat the important stuff – aside from its flavor, the reason it’s special is because it is such a short-lived treat. I don’t want to eat it all year round. Griggers didn’t agree, it seems, and scoffed it whenever she could get her mitts on some.

There’s no other way of enjoying this excellent vegetable – simply steamed with butter. The only addition I’ve made is a serving it on a slice of toast to turn this from a starter to light supper dish. 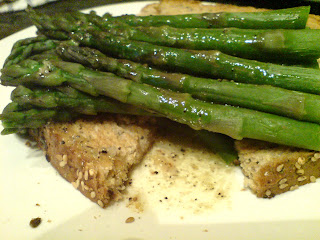 You will need at least 10 stalks per person – or more if you have those delicate thin fronds. Trim away the woody ends by cutting or snapping them off and tie the stalks up with string. Stand the asparagus in a saucepan with an inch of boiling water seasoned with salt and pepper. Cover the pan (or make a dome with foil if your pan is not deep) and simmer until tender and cooked – anywhere between 10 and 20 minutes depending on thickness. Alternatively, cook them in an asparagus kettle or steam them. Meanwhile melt an ounce of butter for every serving and season it with salt, pepper and a squeeze of lemon juice. Lay the asparagus on a plate and pour over the butter or serve it in a separate jug.

FYI: Asparagus is famous for producing smelly wee – though some people haven’t made this observation. This isn’t because their urine hasn’t taken on the smell, but that they lack the specific receptor in the nose that detects it. It is all down to one particular recessive allele of a gene – if you have both copies of the allele, you won’t be able to smell your sticky asparagus wee – but everyone else will! Nice.

#146 Asparagus with Melted Butter – 9.5/10. This is pretty hard to beat – the bitter-sweet asparagus with the rich salty and tart lemon butter are a marriage made in heaven. I could eat this forever.
Posted by Neil Buttery at 4:59 PM