When Jane Grigson wrote English Food in the 1970s, she complained – quite rightly – that the general quality of lamb in England had declined rather. This was mainly due to the importation of cheap New Zealand lamb, which rendered mutton almost obsolete. These days things have changed and British lamb in a staple even in supermarkets and mutton is having a well-deserved comeback.

I popped into Manchester City Centre at the weekend and, by chance, the monthly farmers’ market was on so I had a little browse around the stalls and bought myself a leg of lamb from Bowland in Lancashire – a farm that outdoor-rears lamb, beef and pork. Here’s their website. The man at the fruit and veg stall spotted my purchase and commented that the best meat he’d ever had was from there. Great stuff. Now all I had to do was decide what to do with it and went for the boiled leg of lamb with caper sauce – mainly because it requires very little effort, but also because it is a very Victorian way of cooking meat and wanted to try it.

It’s well worth mentioning that caper sauce is also traditionally served with fish too, so if you’re a piscitarian, or whatever you fair-weather vegetarians like to call yourselves, you can try it with salmon or skate.

The original recipe asked for either a leg of mutton or of lamb – if you are to use lamb as I did, get hold of a real free-range one, otherwise it won’t stand up to the boiling.

Trim the leg of any large amounts of fat if it hasn’t been already and place the leg in a large pot with enough water to cover it. Add stock vegetables – 3 quartered carrots, 2 quartered parsnips, one quartered turnip and three whole onions (all peeled) – plus a very good seasoning with salt and pepper. Bring to the boil and turn down to a very low simmer and leave for 2 to 2 ½ hours depending upon size. Don’t dare to throw the stock away – use it make the caper sauce and with the leftovers, a soup (I did lamb and mint soup).

Whilst it is cooking you need to make a turnip puree as an accompaniment – also traditionally Victorian. Peel and slice 3 pounds of turnips and boil them in salted water until tender. Puree them in a blender, return to the pan and then whisk an ounce of butter into them. Next mix ¼ pint of double cream with a level tablespoon of flour and whisk this into the sauce. Cook the sauce until it thickens up slightly.

When the meat is cooked, remove it from the water, place it on a serving dish flat-side down and make a paper ruff (yes, a paper ruff!) to fasten around the shank for decoration. Spoon the turnip puree around the outside and scatter the quartered carrots over the puree. 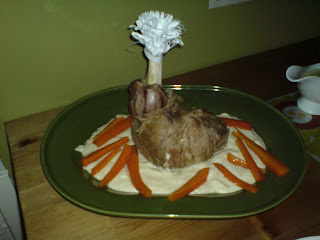 Serve it with caper sauce that has been made using the stock from the lamb.

For the sauce melt ½ an ounce of butter in a small saucepan and stir in a tablespoon of flour. Cook and stir for a few seconds before adding ¾ pint of the lamb or mutton stock (or indeed fish) bit by bit to avoid getting lumps. Simmer until it is the thickness of single cream. Season with salt and pepper and add an egg yolk that has been beaten with 2 tablespoons of cream and stir for a minute or two. Lastly add a generous tablespoon of drained and rinsed capers and ½ a tablespoon of chopped parsley. Serve immediately, says Griggers. 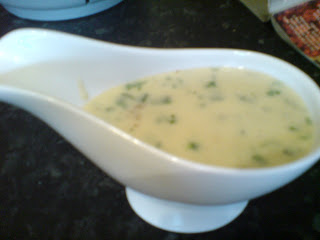 Sorry about the shite picture!

FYI: If you are looking for an alternative to capers – the flower bud of an Asian shrub, you can try using the buds of nasturtium, buttercup or marigold. I’ll stick to the original, though I think.

#143 Boiled Leg of Mutton (or Lamb) with (#144) Caper Sauce – 7.5/10. I really enjoyed this meal. It was so easy to cook, you could not go wrong with it, even if you’ve never cooked anything before in your life. The lamb was tasty and moist and not fatty as most of it had dissolved into the stock – I’m definitely going back to Bowland for my meat. The turnip puree was rather odd – unsurprisingly, it was quite bland and I suppose they were the bland carb element. I would’ve preferred mashed potato though. It’s very hard to mark the caper sauce separately as it is part of the dish. I really liked it – it was piquant and married with the lamb perfectly. The only way it could have been improved would be to chop the capers up first so that the sauce was very capery indeed!
Posted by Neil Buttery at 4:42 PM

yum. i've not boiled a leg of lamb, but i have pot roasted it, per marcella hazan's classic italian cooking, in a close-fitting cocotte with half a cup of wine and some juniper berries, and it is, as your veg man says, the best meat ever. the fat does melt away, etc. etc. the caper sauce sounds good too. and then there's BROTH. i got the book on the basis of your commitment to it, and i'm enjoying reading it while reading you. thanks.

Glad you've bought the book - there's some terrifying recipes in there! I'm so very busy with my work at the minute that i'm having no time to cook anything from the book really. 'tis a shame...

Lamb! Yum! One of my favourite meats so this was always going to be a winner with me. It did not disappoint. The meat was deliciously succulent and really flavoursome. The turnips were bland and really didn't add anything to the dish, but the caper sauce was great. I'm all for it being more capery so I reckon chopping them up sounds like a good plan. All in all a good dish for me.9/10
Charlotte

7/10. this was my first boiled leg of lamb experience, it was succulent and tasty but i would say i definitely prefer a good roasting ! the turnip puree i have no memory of, the caper sauce was lovely though, very tangy, noice, different, unusual...