A cheap treat. I love chicken livers, yet so many people seem to turn their noses up at them – I suppose it’s because it’s offal and folks are squeamish. It is silly though, since they are the main ingredient in pate. Any road, any local butcher should sell them very cheaply – I bought 250 grams for about £1.20 and they were prepared too, which reduced the amount of faffage later. If you buy them – do check they have had their bitter green fall bladders removed or the food will be ruined. This recipe appealed to me because of its simplicity, but also because of its ‘devilled’ (i.e., spiced) nature – a very Victorian way of cooking things (eggs and kidneys spring to mind). Devilling seems to be having a resurgence recently – the day after I cooked this, some chef on The Great British Menu competition that’s being shown on the BBC cooked devilled crab claws. Hopefully it will get popular again.

Have a go at this – it’s enough for 4 people as a starter.

Finely chop a medium-sized onion and fry it in 2 ounces of clarified butter gently. Whilst you wait for the onions to soften, chop up 8 ounces of chicken livers roughly, raise the heat and fry the livers quickly, do this for only 2 minutes, 3 at the most. This is why clarified butter is required – it doesn’t burn when you heat it as the ‘butter solids’ have been decantered off. I made my own by melting some butter gently, skimming off any scum from the top and decanting and solids away that had sunk to the bottom. Take the livers off the heat and add 2 teaspoons each of Worcester sauce and Dijon mustard, Cayenne pepper, 3 tablespoons of breadcrumbs, ¼ pint of whipping or double cream, and finally some salt and black pepper. Mix well and check your seasonings. If you like you devil a spicy one add more – I did! Divide between 3 or 4 ramekins and sprinkle with more breadcrumbs and melted butter. Bake at 190°C for 15 minutes and serve with toast. 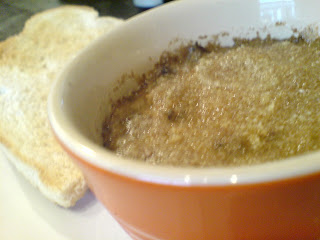 #147 Devilled Chicken Livers – 9.5/10. I may change this to a 10/10 as it was a perfect starter. Absolutely delicious – the devil was fiery yet it was perfectly tempered with the cream and breadcrumbs. The big strong flavours had no chance of drowning out the rich creamy chicken livers. Brilliant stuff. I haven’t stopped thinking about since I made them, and my stomach is rumbling as I type. This is definitely a Grigson classic!
Posted by Neil Buttery at 2:36 PM

Words can't express quite how delicious this dish was. Spicy, creamy and with that wonderful metallic tang you get eating offal and game. The whole combination here was simply perfect. It's quick and simple too, so stop reading and go and cook this! 10/10
Charlotte

i think this may be the highest grade you've given?