After a 5 day wait, the pork I had put in the brine tub was ready for cooking. Jane outlines three different ways to cook your salt pork or ham if you want to serve it hot, but they all start with the same process: simmering in water with stock vegetables.


The first thing to do is to rinse your joint and weight it on some scales. Place the joint in a heavy casserole or stockpot, cover it with cool water and let it come to a boil slowly. Let it simmer for 5 minutes and taste the water – if it’s too salty throw the water away and start again (though it was fine when I tasted mine). For hams up to 4 pounds (2 kilos), cook for 30 minutes to the pound (1 hour to the kilo) plus an extra 30 minutes. However, this can be reduced if the joint is slim. To improve the flavour of the ham, add some stock vegetables: carrot, onion, leek, turnip, that kind of thing. They also flavour the stock with which delicious soups can be made – like this one.

It now depends on how you want to serve your ham:
1. Simply boiled – easy-peasy! Serve it with whatever vegetables or salad you like.

2. Encased in pastry – yes, you heard correctly! Remove before the final hour; encase it in thick pastry, glaze with egg and bake in a moderate-hot oven for an hour.

3. Glaze it. This the one I went for. Remove the ham half an hour before the end of cooking and remove the skin. Criss-cross the fat with a sharp knife and stud the crosses with cloves. Then make a glaze: 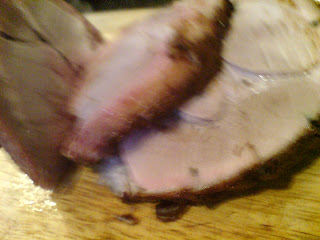 Sorry about the shit picture - I'm sure I took a better one than this!

Mix together a tablespoon of French mustard, one of double cream and one of either brown sugar, marmalade or apricot jam (or anything else sweet you like), next mix in a teaspoon of ground cinnamon or cloves. Spread this mixture all over the fat. Place in a roasting tin, add a ladleful of the stock to the bottom to stop any glaze from catching if it falls, and bake for 30 minutes at 190°C. When done, remove and let it rest before carving.

To accompany it, make a sauce with the pan juices by boiling them up with some cream, white wine or fortified wine, depending on the glaze you used. I went for cream as I used dark brown sugar.

Serve with seasonal vegetables and glazed onions, Grigson says. However, she also says that glazed turnips go well too. So I made those, plus boiled potatoes and peas.

#151 – To Cook Salt Pork and Hams: Part 1 – To Eat Hot: 7/10. I really enjoyed this – the ham cure was beautifully seasoned and salty and the spiced sticky sugar glaze complimented it perfectly. It was a little dry though, but I have a feeling that I cooked a little too long in the stock though as it was a slim piece of meat. That said, it was still delicious and we all polished it off quick-smart. I think that with a bit of practise at this kind of thing, the scores will quickly creep up to the high 8s, 9s or 10s!