I’ve mentioned before that a much ignored chapter in English Food is the Fish chapter (I must tell you what the chapters actually are, so you know where the seemingly random recipes fit). The fish that are in season during May and are in the book are salmon and crab. A quick phone call to Butters to help me decide which fish/crustacean to try first was required – I’ve never cooked with crab other than tinned, and salmon isn’t my favourite. We went for the crab. There’s a few crab recipes but this one seemed relatively straight-forward.

It seems the oceans were a much more plentiful place in the 1970s compared to now (though we knew that already!). The original recipe asks for a boiled crab weighing 2 pounds or one kilogram. Fat chance of that says the fishmonger, however I asked for the biggest one and it wasn’t too far off. It only cost a fiver! I was well happy there – a tiny tin of it cost about 3 quid. Bargin. In fact I noticed the fishmonger was stocked with loads of nice things at the minute... 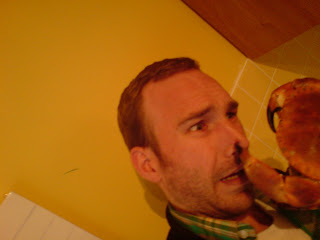 Butters gets a crab infestation. Again

To make a crab tart, start off by making (or buying) some shortcrust pastry and lining an 8 to 9 inch flan or tart tin with it. Bake the pastry blind in a hot oven - 220°C – for 10-15 minutes. Do this by lining it with greaseproof paper or foil and pouring in some baking beans. For the final couple of minutes remove the beans so that the base can crisp and dry out a little.

Now you have to pay the boiled crab some considerable attention. It’s quite an arduous task but quite satisfyingly so. I won’t go through how to remove the meat here, but I’ll instead send you to this link to Deliaonline, which I followed and it did the job. In fact go to that website if there’s any techniques you want to reference. Once you’ve extracted as much meat as your patience will allow mix the white and brown meats together and season well with sea salt, black or white pepper and Cayenne pepper. Stir in one whole egg and two egg yolks (keep the whites) and 8 fluid ounces of whipping cream. Now add a tablespoon each of Cheddar and Parmesan cheese and stir in. Whisk the two egg whites until firm of peak and fold it into the crab mixture. Pour the whole thing into the case and bake at 220°C for 5 minutes and then turn the heat down to 190°C and bake for a further 25-40 minutes. The tart is ready when it has set and lost its eggy wobbliness. 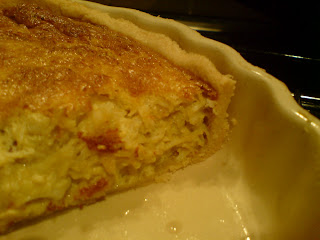 Not the most photogenic of tarts, I know, but tasted lovely.

Griggers says to serve straight away with brown bread and butter, but to be extra-seasonal, I made a quick salad from rocket, sliced radishes, olive oil, lemon juice and salt and pepper. It went very well.

#140 Crab Tart 7/10. I really enjoyed cooking with and then eating crab. The brown meat dissolved into the cream and eggs making it deliciously sweet and moist and the white meat gave the whole thing good texture. The genius of the dish was the whisked egg whites, which lifted to so well. A definite success that really made me feel Spring is finally here! Great stuff.

8/10. mmmmhmmm. first off, the whole preparation was mucho fun, cracking shell with a dirty big hammer and poking out the meat. The tart itself was a joy to eat, perfect for this time of year, light, tasty and fresh as a daisy. I reckon it could have handled some more cheese though, something salty-sweet like gruyere mebs. A pretty hot tart though all in all.