St Valentine had nothing to do with romance, but he did die on 14 February in the 3rd Century. His association with love didn’t occur until the fourteenth century. In the mediaeval age, people thought that birds mated mid-February, a certain Geoffrey Chaucer spotted that St Valentine’s Day coincided with this event, and brought them together in one of his stories, Parlement of Foules, cementing the two forever more. 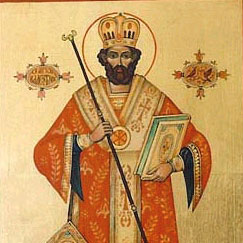 Unlike St Valentine, I have no idea why this dessert is linked with love: jam, almonds and meringue don’t seem particularly romantic to me, and all Jane says about the recipe is that it’s ‘for St Valentine’s Day, to eat at the end of a meal rather than at teatime.’
I suggest using a normal flan tin and baking it any day of the year.
I’ve been meaning to do this straight-forward recipe for a long time but kept forgetting to make it in time for Valentine’s Day. Well this year I remembered. I also remembered to buy the heart-shaped flan tin required; something else I kept forgetting to do. 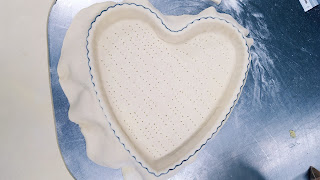 Begin by lining a heart-shaped flan tin with puff pastry (I made my own, following the recipe for #384 Quick Foolproof Puff Pastry) making sure you stud the base well with fork marks. I popped it in the freezer whilst I got on with making the filling. I used a 9-inch heart-shaped tin.
Begin by melting two ounces of butter in a saucepan. As it cools, beat the yolks of four eggs (keep the whites, you’ll need them) along with four ounces of caster sugar, the zest and juice of a lemon, two ounces of ground almonds and the cooled, melted butter, then fold in 2 ounces of slivered almonds. 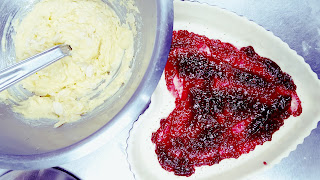 Take the lined tin and spread over the base two to three tablespoons of raspberry jam. For these sorts of puddings, it’s a good idea stop spreading half an inch from the edges of the tin, as it makes the next step much easier. 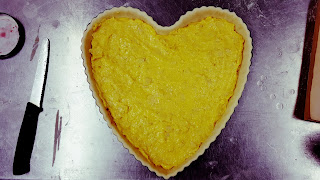 Take the filling and spoon it into your tin – don’t aim for the centre, place smallish blobs all around the outside edge first. Now spread the filling evenly, edges first then moving inwards. This ensures the jam doesn’t ride up the edges of the pudding.
Bake in an oven preheated to 200°C for 30 to 40 minutes, or until the pastry has risen and the filling set and golden brown. 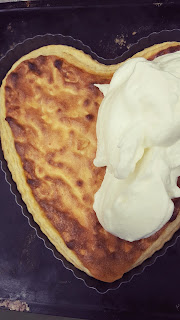 Toward the end of the cooking time, prepare the meringue. Put your reserved egg whites, along with a pinch of salt, and beat with an electric whisk until you have whites that will form still peaks. Add a tablespoon of caster sugar and keep beating until you have a nice glossy meringue that holds its shape well. 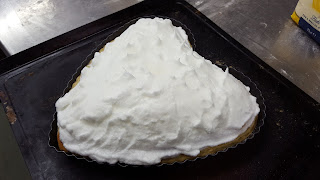 Spread or pipe the meringue over the top going right to the pastry edges, sprinkle another tablespoon of caster sugar evenly over the top and bake for a further 15 minutes or until the meringue is an appetising golden brown.
Serve warm.
#428 Sweetheart Cake. Well it was certainly sweet, and it was definitely a heart, not I’m not sure if it was a cake. This pudding, a cross between a Bakewell tart and a lemon meringue pie, I enjoyed but the filling was extremely sweet. At least the meringue wasn’t too sugary, otherwise it would have been too sweet to eat, the lemon also helped take the edge off. I ate some the next day cold, and it tasted less sweet. Next time, I will half the sugar. 6/10 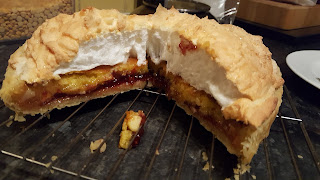