It’s always exciting trying a new food, and this one – sorrel – is completely new to me, even though it is a common part of many a British meadow’s flora. At least that’s what the foragers’ books keep on telling me. I’ve kept my eyes open and only found the quite similar, though inedible, dock leaf when I’ve been on the look-out. So, I was very lucky to happen up some at the Unicorn grocery whilst I wasn’t looking for it. It’s good really, because now I know what it looks like and tastes like I’m much more likely to see it in the grassland in the future.

Sorrel is one of our forgotten vegetables, and was once part of every garden as it grew happily in the early Spring when the store of over-wintered fruit and vegetables had run out, but the new springtime plants were not yet laden with their bounties. Famine time. These days of, course, we have no gap to fill in the food year and so it has gone out of favour. Another reason for its decline in popularity is that, because of its acidic zingy sharpness, it was used a lemon substitute and is therefore required no longer. It's very easy to grow - I shall be growing some next year, for sure. Here's a nice article about it from The Telegraph.

This recipe uses pureed sorrel that takes seconds to make, so if you find any, either in the meadow or the greengrocers, try this to get you started. It serves six, but you can decrease the amounts if you don’t have enough sorrel (or people!).

First boil six eggs for 6 minutes exactly (unless they are large, then boil for 7), this will achieve a boiled egg with well-cooked whites but still squidgy yolks. Whilst they are boiling, prepare 8 ounces of sorrel by rinsing, draining and removing the stalks just as for spinach. Add the leaves to a saucepan that’s over a moderate heat, after a few seconds it will reduce to a dark green puree, then add salt and pepper and 3 ounces of butter. Keep warm. Now fry six slices of bread in butter or oil until crisp, and cut into triangles (12 altogether). Now arrange the ingredients in a bowl or serving plate: sorrel first, then the eggs (whole or halved) and then the fried bread. Finally decorate with orange wedges (which I forgot to do!). 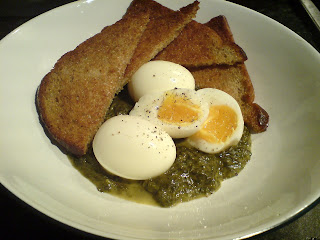 #164 Sorrel with Eggs – 7/10. I really enjoyed this usual and forgotten vegetable. The flavour was intense and was tempered well with the oily bread and creamy yolks of the eggs; it could be best described as lemon but with a strange astringency, like that of green rhubarb or raw gooseberries. It would be delicious with fish I expect. This is the only recipe that uses sorrel in English Food, but I am on the look out for other recipes elsewhere.
Posted by Neil Buttery at 4:21 PM

One of my favourite childhood dishes was sorrel soup made by my Dad. I'll ask him for the recipe! xx